In Praise of French Cut Boxers

They’re simply the perfect design for their purpose. 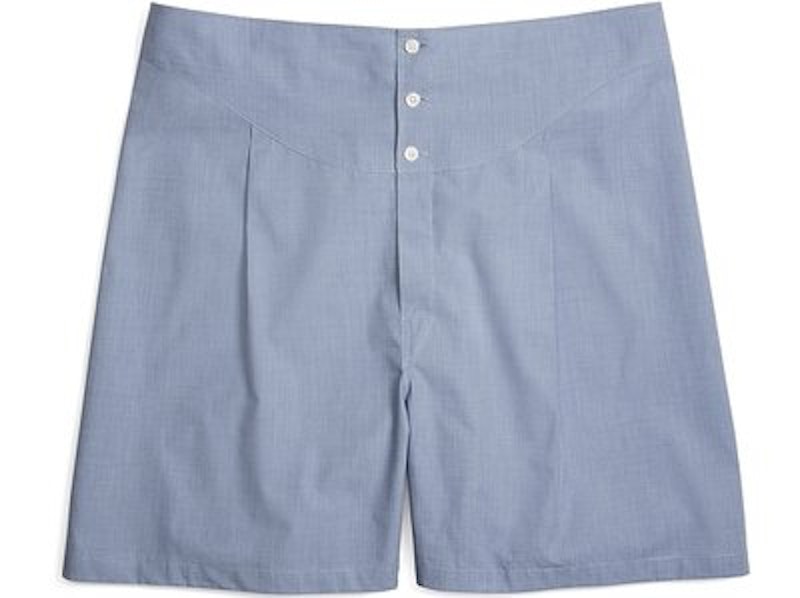 There’s now only one place to get them—Brooks Brothers. And they’re down to one color, blue.

Men’s French Cut Boxers are the best underwear in the world. Like printed books, movies on actual film, and fresh lemonade, they’re not retro or nostalgic or ironic. They're simply the perfect design for their purpose. And elegant.

Think of the most comfortable cotton broadcloth boxers you’ve ever worn, but instead of a flimsy waistband imagine a stylish extended layer, really a continuation of the fabric below, that buttons up from your lower abdomen to your waist. It’s really more like one piece of cloth than contemporary underwear, which is like navigating two moving parts—the underwear proper and then the waistband, whose quality can vary from pair to pair. Snug and confident up top, free and easy in the cheap seats, French cut underwear is at the Platonic ideal of how underwear should be designed.

When it comes to underwear, I need a couple things: room for my boys to “breathe down there,” as Kramer from Seinfeld once put it. That, and a nice snug fit around the waist. It’s become difficult to have both. As rudimentary as the concept of underwear that actually fits is, in the past 50 years fashion designers have forgotten or abandoned it. Men now have only two choices of underwear—boxers or briefs. The boxers are often not made well, with waistbands that are itchy or easily fray and tear apart, sometimes not even lasting two wash cycles. (Ralph Lauren is the worst.) And briefs can be itchy, uncomfortable, and cause even more serious problems.

One of the better makers of underwear is Under Armour, the maverick brand that’s exploded to become the second biggest sports-apparel company in the country. Full disclosure: I’m usually in the tank for Under Armour. I went to high school with Kevin Plank, the guy who founded UA. I didn’t know him very well, but I did know his brother Scott, who was in my year. When I had to deal with a serious illness in 2008 I woke up one morning and found a box at the front door with a note from Scott. The box had about $500 worth of Under Armour gear in it. The note wished me a speedy recovery. The Planks are stand-up guys and have poured millions of dollars into my beloved home state of Maryland.

They also make really good underwear. The form-fitting Under Armour “Boxerjock” keeps things dry and comfortable in the pelvic hothouse all day, using that stretchy material UA patented that “wicks sweat away.” (I hate to quote ad copy, but the stuff really does do what it says.) Living in the mid-Atlantic region of America it’s possible to go through three changes of clothes in the summer in one day; Under Armour is the first brand I’ve found that can last 24 hours without soaking, drooping, and sagging.

Where you run into a problem with Under Armour is with the straight-up UA boxer. It’s the same shortcoming as every other boxer—a nice airy lower section set off by a waistband that’s too narrow. What a wonderful world it would be if UA came out with a line designed on the French cut. It would signal, as Richard Neuhaus once phrased it, a long way back to the obvious.