In which a couple of widespread misconceptions about bike ownership are forever upended. 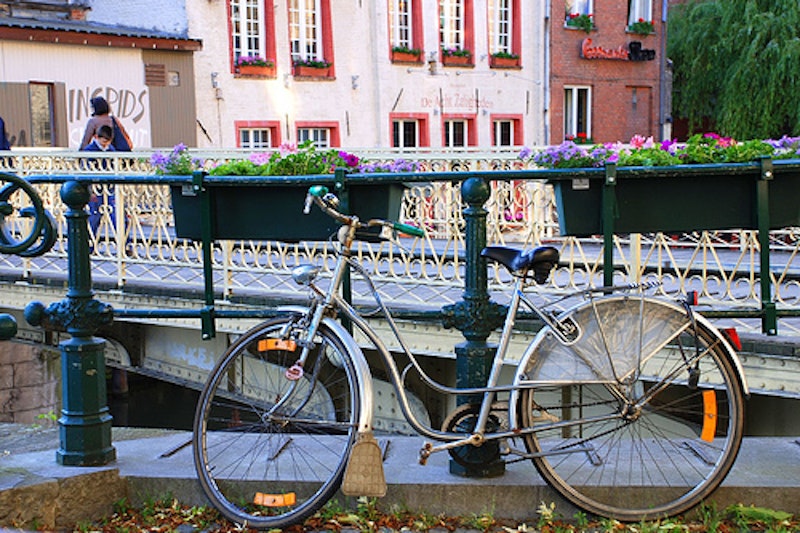 It’s easy to go into bicycle purchasing with lots of stupid preconceptions, several of which I will debunk here:

Curly handlebars: I have unpleasant childhood memories of trying to ride my dad’s ancient Canadian touring bicycle, a very large steel bike that featured drop handlebars. I assumed you had to put your hands in the drops (that is, on the lower parts, within the curve of the bar) for the whole time you were riding it. This put me in an uncomfortable position in which I could barely balance, looking straight down at the front tire, barely able to pedal. Part of this was because I had the saddle adjusted badly (saddle tip: your knee should be just slightly bent at the lowest point of the pedal stroke), and part of it was because I didn’t really know how to ride a bike and was locked onto the bars like a limpet. Anyway, this made me think that drop handlebars were generically a bad idea; they’re not. Drop handlebars offer more potential hand positions than flat bars—it’s not necessary to cram yourself into the drops like you’re coming down the Alpes d’Huez for the entire ride. You can rest your hands on the top, or on the brake hoods, both of which will feel like heaven after trying to stick to the drops exclusively. Flat handlebars are great if you plan to be bicycling around the evil death vine from The Ruins or other things that will snag you; otherwise drops do the same as flat bars and more.

Mountain Bikes: Some are turned off by road bikes because they seem to be the exclusive domain of colossal jerks wearing neon bodysuits and sweating until they achieve a generally leathery appearance. This is kind of true, but there are also plenty of fatties and borderline fatties like me who enjoy road biking, and one can now purchase the skintight spandex anonymously over the Internet, which is a considerable advantage. People seem to think that if you want a bike it ought to be a mountain bike, with big knobby tires and possibly, as I covered above, with a sophisticated suspension. If you’re riding on pavement or (god forbid) sidewalks you really don’t need a mountain bike—the big knobby tires are great for soft surfaces like dirt or piles of fine Egyptian cotton towels, but actually provide worse traction and performance on pavement than skinny road bike tires. And the frames are much heavier than road bike frames, which means you have to do more work and will show up at the Quiznos all sweaty and red in the face.

Saddles: Big, soft saddles are comfortable only for short, as in less than a mile, trips. You want something firm and supporting, like a German. Don’t buy a gel saddle cover, it will only make things worse; do buy shorts with a padded chamois in them, and do wear them without underwear, no matter how considerable your initial revulsion to the idea is.

Frame materials: Usually you will have your pick of carbon fiber, aluminum or steel frames. Carbon fiber is the most expensive and, supposedly, the highest performance. If you need to shave seconds off a ride to the WaWa then carbon is for you. Aluminum is usually the least expensive and has many of the same stiffness qualities as carbon, without the ability to flex and absorb moral and road-based shocks. Many aluminum bikes now feature carbon-fiber seat stays, which significantly reduce road vibration and also mean that the bike has a critical part that could, at any minute, explode irreparably. Steel is the oldest-fashioned frame material and, when done well, gives the smoothest ride. It’s easy to repair too, in the sense that welding things is easy, and you can stick magnets to it if you are afraid of vengeful artificial intelligences. There’s also magnesium, which if I remember my middle school science correctly will burst into flame at the slightest contact with moisture.

So, novice bicycle purchasers, there you have it. If this tendentious guide to a tiny fraction of the potential bicycles out there hasn’t helped you figure out what you want and need, then you are welcome to go to hell.