It's more complicated than it needs to be, but easier than it looks. 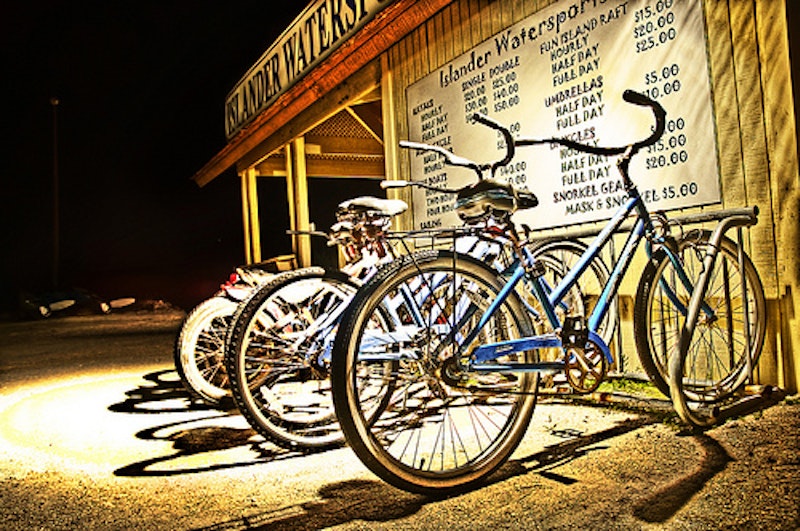 In the 1980s, buying a bicycle was not a big deal. My family did it casually, which was the norm before my dad and I discovered product reviews on the Internet and changed our buying habits to include the shrill, semiliterate opinions of hundreds of anonymous losers. As a child, my primary consideration in bike buying was color, and I had not absorbed nearly enough condescending advice from strangers so I didn’t know that, for instance, coaster breaks are anathema, or that one must pluck the reflectors from a newly purchased bike as if they were fat leeches battened on the silky coat of a fine racehorse.

Today, buying a bicycle is a hideous ordeal, as are all purchases in our wonderfully free market. Bicycles are actually pretty rad, especially in this time of high gas prices and increased ecological awareness. As long as you are willing to arrive at your destination sweaty and in considerable pain the bicycle is an excellent replacement for the automobile. Modern, lightweight bicycle racks ($700 and up) can carry as much cargo as would ordinarily fit in the glove compartment of a Toyota Yaris, and they also incorporate the theft-deterring feature that if you crash, your possessions will go flying all over as if you were a piñata filled with inconsequential printouts and cheap bicycle tools.

Lots of people, including this writer, enjoy bicycling for fitness. This activity combines the cardiovascular benefits of jogging with the moral benefits of placing thousands of dollars in a shopping bag, weighting it with stones, and hurling it into the ocean. Cycling supposedly is four times as efficient as jogging—unfortunately this means that you need to cycle four times as much as you would jog to get the same fitness boost, not that cycling reduces your Papa John’s gut four times faster than jogging. This was a disappointment. On the plus side, cycling is easier on the knees. On the minus side it is much, much harder on the boner.

Anyway, when buying a bicycle, you should have at least a vague idea of what you want to use it for, if only so that two weeks later you can think to yourself,  “Why the fuck did I think I wanted a touring bicycle?” The conventional wisdom is that you should buy a bicycle at a local, independent shop, provided that the employees are not colossal pricks, which is a big if. Bicycles are complicated enough that you want the people who put them together to know which parts are really supposed to be tightly fastened and which parts can be fastened in an ironic, winking manner. The Internet offers many fascinating bicycles for incredibly low prices but if you think it is a great idea to order a $2800 carbon fiber bike sight unseen from a website featuring animated GIFs and a non-mutable MIDI soundtrack then I have a bunch of used luxury shaving equipment you might be interested in buying.

Let’s focus on road bikes. Road bicycles have narrow tires and are meant to be ridden on asphalt, tarmac, tarmacadam, macatar, rip-rap, or low-pile area rugs. If you wish to blow thousands of dollars road this is your best bet, since an enormous number of cardiologists, vascular surgeons, and radiologists enjoy road biking. Their technical know-how, vast fortunes, and desire to turn every human activity into a humorless competition have generated a huge market of ultra-light, ultra-high-performance bicycle frames and components.

Anyway, there are three major kinds of road bike that you can buy:

1) Commuter-style road bikes, which will often come equipped with all kinds of plastic fenders and lights and often feature flat, mountain bike style handlebars. These are designed to be non-threatening and reasonably efficient and will usually put the rider in an upright position where he will look terrified and alone. You could also put Dutch-style city bikes in this category. Many bikes marketed to commuters and college kids offer elaborate front and rear suspensions, promising increased ride comfort. This technology originally came from mountain biking, which is where it should stay. Shocks on a bike are designed to let you keep rolling and pedaling over rocks and logs; comfort is secondary, if indeed suspensions really increase it at all. If you plan on riding directly into curbs frequently you might want a suspension; if you’re riding on reasonable roads or paths with a suspension you’re mostly electing to pedal around extra weight.

2) “Comfort” or “Cushy” road bikes/touring bikes. These are sometimes racing-quality road bikes that offer a more upright riding position and have sacrificed raw speed for a refined ride that promises comfort over the long run, rather than maximum speed over a (relatively) short distance. Real touring bikes have all kinds of little “braze-ons” so you can buy stunningly expensive racks and panniers that you can cram all your clothing in so that you can contract scabies and enjoy a summer of bicycling around Italy. True touring bikes are rare now because of ecologically unsound hunting practices during the turbulent 1970s.

3) Sport or racing bikes. These are designed for maximum stiffness for good power-transfer, and probably lots of other things too. In my journey to becoming a guy who knows a modest amount about bicycling, I’ve noticed that bicycles share a price-acclimatization curve with every other stupid thing I’ve gotten interested in. That is, prices that initially seem stupidly expensive gradually reduce (only in their emotional dimensions) until you think of them as matter of fact. A few years ago I tried to learn to play the guitar, and started out by thinking that $200 would buy a really nice item, one that he could play forever and that all your guitar buddies would admire as they played hot lixx and passed around some drugs. It turns out that $200 will buy a “perfectly good” guitar, which means a totally shitty guitar although of course you would be hard pressed to tell the difference until you got good, which I never did.

It’s substantially the same, gentlemen, with bicycles. I paid $95 for my first real bike and thought it was a reasonable deal, which in fact I was, but now I think of $95 as the price of a mid-range water bottle holder and have caught myself considering $4500 Italian bicycles as great bargains. A cheap pen will write, a cheap razor will shave, and a cheap bicycle will transport you, and after that it’s all about subtly increasing quality and, in some proportion, image.

Later in Part II: Debunking your preconceptions of bike-buying.