A War On Drugs

The US's over-reliance on depression and anxiety medication has horrible effects on our soldiers. 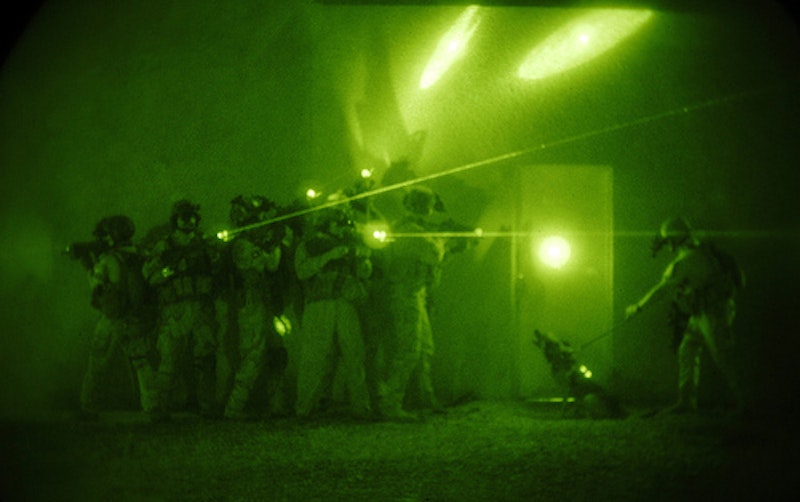 Photo property of the US Army

In a list of the top 100 most commonly prescribed medications, I counted 13 drugs that can be used to treat anxiety and depression. Television ads for Zoloft and Cymbalta are commonplace. Odds are you know at least one person who is currently taking antidepressants or anxiolytics; they’ve become ubiquitous in contemporary American life.

The same holds true in the U.S. Military, as “about 12 percent of soldiers in Iraq and 15 percent of those in Afghanistan reported taking antidepressants, anti-anxiety medications, or sleeping pills,” according to a report by MSNBC. These are active-duty troops we’re talking about here, men and women armed with weapons and engaged in combat. If that worry seems excessive, it’s only because we’ve become far too desensitized to the reality of these psychoactive medications.

Take for instance this story, from the same MSNBC article:

Marine Corporal Michael Cataldi woke as he heard the truck rumble past.

He opened his eyes, but saw nothing. It was the middle of the night, and he was facedown in the sands of western Iraq. His loaded M16 was pinned beneath him.

Cataldi had no idea how he'd gotten to where he now lay, some 200 meters from the dilapidated building where his buddies slept. But he suspected what had caused this nightmare: His Klonopin prescription had run out.

Klonopin is a type of benzodiazepine, a class of drugs often used to treat anxiety and insomnia. Long-term use of benzodiazepines can lead to physical dependency and even addiction. If you stop taking them suddenly, as Marine Corporal Cataldi was forced to do with his Klonopin, you can develop benzodiazepine withdrawal syndrome, which can lead to psychosis, hallucinations or extreme aggression. If you are in the U.S., with easy access to your prescribing doctor, benzo withdrawal is not a very big concern. But if you are off in the Middle East fighting terrorists or insurgents, more pills are not simply a phone call away.

When Marine Corporal Cataldi ran out of Klonopin, a medical officer gave him Seroquel as a replacement, which is not even an anti-anxiety medication, but an atypical antipsychotic used to treat schizophrenia and bipolar disorder. It’s a frequently used off-label to treat anxiety and sleep disorders, which again isn’t really a problem if the medication is closely monitored by a physician, but it’s highly sedative nature makes it entirely inappropriate for wartime usage, not to mention incredibly dangerous.

Apparently, though, the military disagrees, stating, “they believe many medications can safely be used on the battlefield.  They say they have policies to ensure that drugs they consider inappropriate for soldiers on the front lines are rarely used.”

And this is perhaps the core of the problem: these drugs are considered safe. While it’s true that millions of Americans take antidepressants and anxiolytics every day without incidents—and granted, most report significant improvement to their lives as a result of these drugs—they are nonetheless medications that physically alter brain chemistry and are accompanied by staggeringly long lists of common side effects.

For example, some of the more common side effects of Klonopin include: drowsiness, aggression or irritability, psychomotor agitation, cognitive and memory impairment. The side effects for Ambien, a sleeping pill Cataldi was also taking during active-duty, are: hallucinations, delusions, decreased motor coordination and ability to maintain balance, impaired judgment and reasoning. Even Zoloft, an SSRI that Cataldi was taking for depression, can lead to: loss of coordination, tremors, fainting, seizures, hallucinations and suicidal ideation in people 24 and under.

The U.S. Military is hard up for recruits, I get that; but there’s a very real danger in sending heavily medicated and largely untreated fighters back into active-duty. Daily prescription usage requires the kind of predictable routine that is impossible to maintain while at war. One minute you can be settled down for the night, ready to head to bed and the next, you’re called into action. Take this instance: “One night, Cataldi took his pills after his commander told him he was done for the day. Five minutes later, however, plans changed, and he was told to drive the LAV. He asked the Marine sitting behind him to help keep him awake. ‘I said, ‘Kick the back of my seat every 5 minutes,’ and that’s what he did.’” A LAV is an armored personnel carrier—Cataldi’s inability to stay awake on his own put himself and his fellow soldiers at risk.

The more important issue, however, is that these potentially hazardous drugs don’t really target the problem; they just mask the symptoms. Post-traumatic stress disorder, which Cataldi and several other soldiers described in the article undoubtedly suffered from, is not a quick-fix issue. It’s a serious and often life-altering anxiety disorder, marked by a severe and continued emotional reaction to an experienced trauma. Diagnostic criteria include exposure to traumatic events and persistent re-experience of those events in the form of flashbacks or nightmares. Events like watching your friends gunned down right next to you, searching through dismembered corpses for any live bodies after a helicopter crash, having the Humvee you’re riding in blown apart by a roadside bomb—experiences that are not simply wiped from your memory once you start taking a nice cocktail of antidepressants, anti-anxiety meds and some sleeping pills.

The Military insists that there are procedures in place to “ensure that service members taking medications for psychiatric conditions are deployed only if their symptoms are in remission.” While antidepressants and anxiolytics are capable of reducing PTSD symptoms, rarely are they capable of achieving actual remission. These drugs have become like Tylenol for mental health conditions: they’ll mask the pain, but do nothing to identify and target the source. PTSD is not the result of a chemical imbalance that drugs alone can remedy. Soldiers with PTSD need actual therapy and time to recuperate, but they’re not getting it.

The triggering event for Cataldi occurred in January of 2005 and is recounted as follows:
…he and five other Marines received a radio call informing them that a helicopter had disappeared. The men…found what was left of the chopper. Flames roared from the pile of metal. Cataldi, 20, was ordered to a body count.

The pilot’s body was still on fire… he picked up a man’s left boot in order to find the dog tag every Marine keeps there. A foot fell to the ground. ‘People were missing heads,’ Cataldi remembers. ‘They were wearing the same uniform I was wearing.’

When Cataldi returned home to California, his behavior became increasingly similar to the symptoms of PTSD. But when he went to see a psychiatrist on the base, the doctor merely prescribed some medications (Klonopin, Zoloft and Ambien). By 2006, Cataldi was back in Iraq, performing the same job. Only now, he had three separate drugs acting on his brain’s chemistry.

Antidepressants and axiolytics have become too much of a quick fix. Mental health is not so simple as, “Feeling blue? Here, take these drugs. Now get back to work.” We shouldn’t be asking Military personnel to drive armored vehicles across the desert when they are taking medications with effects that would prevent the average person from safely backing a car down a driveway. They shouldn’t be handling guns while using drugs whose labels warn against using a power sander.

I know that the Military needs fighters, but I also know that our soldiers deserve better than this. I’m not sure what the alternative would be, or how best to fix this problem (apart from, of course, finally leaving the Middle East), but I am sure about one thing. When Marine Corporal Cataldi—who remains highly medicated and physically dependent upon Klonopin—said, “If I had never been put on medications and just had counseling, I’d be a lot better off,” he was right. And that is heartbreaking.