A family that’s terrified together stays together. 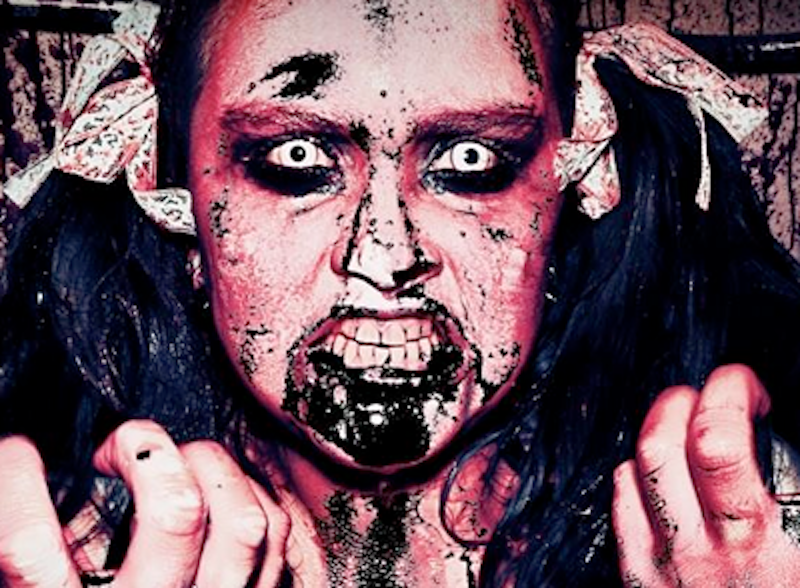 I love to be scared. Last year our family went to Halloween Horror Nights at Universal Orlando and it was fantastic, though my kids drew the line and refused the clown attraction (wimps!). This year, we stayed closer to our native Maryland and headed to Middletown, Delaware to Frightland, which was voted one of the Top 10 Scariest Haunted Attractions in the U.S. by the Travel Channel. Eight separate haunted attractions awaited us, all centered around the theme that Dr. Idalia’s daughter Isabella committed suicide and haunts the place—her father went crazy at her tragic loss—and of course lots of zombies are around because zombies are the undead like the ghost-daughter. A mansion, cemetery, attic, barn, prison, ghost town, woods-with-spiders, and haunted hayride remain on the property along with the central ghosts as well as live entertainment, carnival food, rides, and so on.

My four kids, one in college, one in high school, one in middle school, and one in elementary school, along with my husband and I had just visited the official-themed The Walking Dead, Halloween, and other official Hollywood-style attractions including full-on Harry Potter 3-D extravaganza last year—a near impossible act to follow. But nothing beats having your whole family creep cautiously, the younger ones sandwiched in between the older ones, making your way as a single unit, tense-faced and tentatively, gripped-hands and grinning, through a near-dark haunted attraction, not knowing what is going to jump out at you next, adrenaline pumping through your veins. Pure fun. So could the local spook shop hold up? Expectations firmly in check, we decided we’d visit all eight attractions at Frightland together, vote, and rank our favorites. Here are the results, averaged from the family’s least favorite through our number-one choice for favorite attraction:

#8. Zombie Ghost Town: The haunted hayride wisely delivers park-goers to a separate section of Frightland where they wind their way back through several attractions to keep the flow of hauntees moving. The detailed bloody butcher room is well done here (my daughter said “Oh My God” and the butcher, one of his eyeballs dangling about six inches below his face, his apron drenched in blood, surrounded by slaughtered animals and humans) replied “Your God can’t help you here.” There’s a great introductory old-western actor in the beginning. However, there aren’t enough actors in this portion compared to the rest of the park, and you’d think there would be more traditional zombies given its name. Though there are a couple great ground-level spooks at the end, it was a family-unanimously voted least favorite.

#7. Ravenwood Cemetery: This is a short section you walk through between the hayride and the “Fear” and “Zombie Ghost Town” parts, basically on your way back to the main part of the park. Again, family unanimous vote. It’s a shame, because haunted attractions should take a cemetery seriously, and it would be easy for Frightland to kick this section up a notch for future years. There was one haunted bride knelt down that scared the living daylights out of me. The hilly, wooded area lends itself toward a potentially chilling experience—there’s even a fantastic cemetery gate, but after the haunted hayride this area is definitely a bit of a letdown.

#6. Fear: The idea here is that everything you’re afraid of is going to happen in this attraction. Big spiders? Check. The monster in the closet? Complete with clothes moving all over the place? Happens. Then a bunch of other fears you had but I couldn’t tell because it was dark as hell and I was scared so I’m not really sure. I’m not sure if it happened on purpose but I’m scared of walking over sidewalk grates and I swear to God all of the sudden there was a city-style sidewalk grate with green lighting underneath and just as I was walking over it, I looked up and there was a spooky dude standing there. I screamed at the top of my lungs. An interesting dynamic happens when you’re going through all these haunted attractions with your family. The “who is holding on to whom” and “which order you’re going in” hierarchy becomes really interesting. I didn’t want to be in the front, I didn’t want to be in the back. I hid in the middle with my fourth-grade son.

#5. The Attic: This attraction was a close call with #4—we all liked both of them pretty equally. The most significant thing about the place is that there is 100 percent darkness. You have to maneuver yourselves around the narrow halls with zero visibility. You have to feel your way. You hear voices, doors slamming, footsteps behind you. I think it’s the scariest because you never know what’s coming. At one point, a voice tells you to “climb through the body bag” and you have to force your way through some kind of collapsed moonbounce situation that would be a claustrophobic/germophobic person’s literal worst nightmare. Panic attacks all around. It was a blast. We all ran out of there in hysterical, relieved laughter. You could hear the “Ghostbusters” song playing outside and that’s when my son said he knew it was over.

#4. Haunted Barn: The thing I thought was the most outstanding and unique about this fun, scary attraction was that somehow, the actors had figured out our names. They hadn’t asked us, but I guess they are listening. You could hear someone through a wall whisper, “Where’s Faith?” or “I think I hear Faith coming this way now” with a creepy giggle and my 12-year-old daughter’s eyes were the size of dinner plates. “How do they know my name?” she asked in horror. “I’m glad they don’t know my name,” said my 10-year-old son. Then, out of the shadows came a horrifying Beetlejuice-stepbrother, homeless-zombie type holding a very realistic looking rat who walked directly up to him and said, “You must be Bobby.” And he ran.

#3. Zombie Prison: The head security guard (and a guy wearing a face somehow encased inside razor wire) actor sets the tone for this top-notch attraction by yelling at guests to get in line to be taken into the prison. A shaking, electrified buzzing elevator ride (complete with terrifying elevator operator) later, and you’ve landed inside the walls of a very haunted prison. Electrocutions are taking place, you walk through a bus where everyone but that one guy who’s still alive, and prisoners are following you around. Though this wasn’t one of my personal top three, it was elevated to this position in the standings by my kids’ top rankings.

#2. Haunted Hayride: Frightland has been open for 19 years and the hayride is really where they’ve spent the majority of their time and effort and energy in terms of bringing the professional acting, props, makeup, costuming and staging. In the family voting, it was a very close battle between this attraction and the top-voting winner. Let’s just say that a couple of the staging areas (the haunted carnival, the castle area, the haunted railroad, the full-size drive-in movie theater) are so detailed and well-acted that you’ll forget you’re not inside a movie set. The ride lasts around a half hour and during that time, actors are on and off, in and around the hayride through the haunted woods with you and you are guaranteed to be really, really scared.

#1. Idalia Manor: You absolutely cannot beat the classic haunted mansion, and Frightland has this attraction down to a very artistic science. It’s horror perfected. I wish I could have gone through it three more times, because you hate the feeling you’re missing something. The costumes, the room décor, the timing, the acting, the decorating—it’s all gothic perfection. Our family's votes are in: Frightland is scarier than Universal's Halloween Horror Nights. My favorite room is the library—moving bookshelves and all, but the haunted nursery was voted easily the scariest place in the whole park by my family.