What to expect from a tour of Warner Brothers studios. 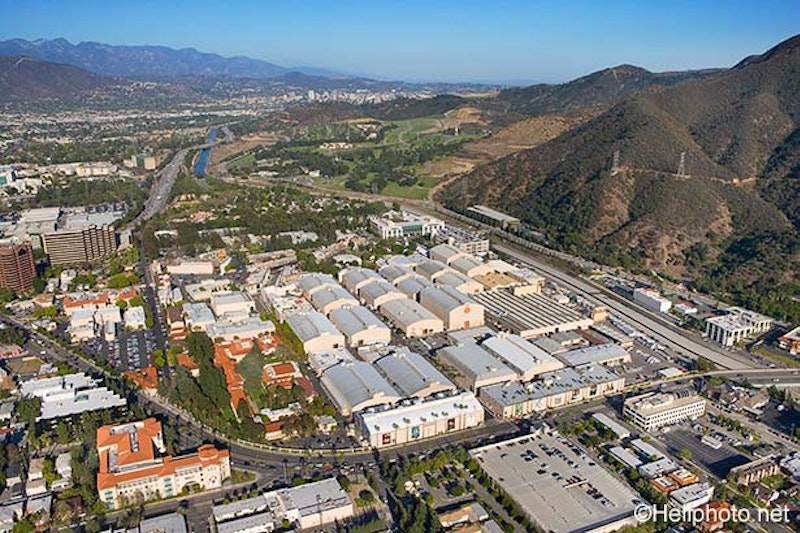 Most TV viewers are casually interested and sitting. Tourists are casually interested and standing, and Warner Brothers knows just how to handle them. The studio tour guides better get paid a lot. They have to spend every day with people who are killing time. The management of these people is what the tour guide does, and he does it in pretty much the same way day in and day out. Think of the rulebook he has to follow, and the training he goes through. An operation as well-oiled as the WB tour doesn’t get results by accident.

The fellow who handled us at Warner Brothers was in his mid-40s, stocky but lean, with hair that was already passing from gray to white. I admired him because his voice never broke. He had to make conversation with people who had nothing to say back, a dozen of us all at one time. For me, and a lot of people, that would be torture, an exercise designed to break the will. But he treated it as a job and tackled it head on. Bad tour guides develop a rictus grin and its vocal equivalent (“Okay, people, we’re walking… we’re walking!”). I guess the good ones live with absurdity and master it.

He came across as an up, vigorous man, a go-getter. That made the tour a pleasure but it also struck an odd note. He was doing a drone job, a very minor drone job. In the WB order of things, conducting tourists across the production plant is up there with conducting lice across the studio’s scalp, if lice could pay tolls. The money ($48 for my ticket) makes the enterprise worthwhile, but the studio’s reason for being is to generate salable footage. Being visited is incidental at best. Some of the things you won’t see when you take your Warner Brothers tour: editing rooms, dubbing stages, and (if it’s summer and no one is shooting) lights and cameras.

The tour is two hours and 10 minutes, and there’s a new one starting every 20 minutes. You get your tickets in the gift shop and then hang out until it’s time for the introductory film. In the gift shop: Friends coffee mugs and lots of other Friends stuff; a wall display of Superman, Wonder Woman and Green Lantern t-shirts; helpings of Big Bang, Ellen and Two and a Half Men stuff. A woman pokes at a rack of t-shirts. “The Mentalist,” she says. The boy next to her: “I’ve given up on that show.” Next comes the introductory film, shown in one of several projection rooms that open off from the gift shop. The film is made up of fast clips reminding you why you know the name Warner Brothers. They’re like flash cards: Jimmy Cagney, Casablanca, Bugs Bunny, Urkel, Friends, Charlie Sheen, Oscar films, bloopers.

The film ends and a pair of tour guides divide us into two groups. They do this in a jolly, office-humor way: “All of you A-through-M, you get to go with me. The rest of you, you’re stuck going with Al. Aw, too bad.” But Al, of course, is just fine. He loads everybody onto an extended golf cart, which he then drives through various backlots and to several soundstages, followed by the props department, a display room for movie cars and finally the studio museum (second floor all Harry Potter). Unloading the gang for the sound stages, he rounds up our cameras and packs them away in a locked compartment on the extended golf cart. This happens often enough that it highlights Al’s efficiency in managing us. He never tells us why Warner Brothers wants the cameras locked up, but most likely the idea is to keep competitors from getting a look at anything in the works.

The tour’s first third or so, the backlots and the exterior sets, was a lot of fun. You’re slapped in the face with how convincing studio sets can be. First we rode along a stretch of dirt road under heavy foliage, with a pond (Private Benjamin’s training swamp, a lagoon in Vietnam for the 1980s TV series China Beach, and a place where bodies turn up for crime shows). Next was a neighborhood of clapboard houses, then a city street and then a village square dominated by a church and steeple. Al pointed out that the road took short, bunched-up curves when it passed through the pseudo-jungle and the imitation small town. Looking from one curve of the road to the next, somehow you thought that more of the same—more jungle or smaller town—must lie beyond the next bend.

Some more of what Al showed us from the golf cart:

- A studio administration building that looked like a motel, one that looked like a hospital/airport and one that looked liked the family home of a small-town judge. Al explained that back in the old days Jack Warner ordered that studio buildings had to double as film exteriors, a practice that has held ever since. The supposed family home is made of white clapboard and fits right into the small-town backlot, but it’s the production office for Chuck. The producers get kicked out whenever a shoot needs the place.
- The two-fronted house used by The Gilmore Girls. Either side of the building has a front door, and inside there’s no ceiling—you look straight up at the rafters. The living room and stairs were used for a Friends flashback about Ross and the prom.
- The town square used for The Music Man, The Dukes of Hazzard, the last episode of Seinfeld, and Ocean’s 11 (Sinatra version). This is also where Paul Newman knocked over the parking meters in Cool Hand Luke. The square’s church was used in The Lost Boys and, sort of, in Back to the Future. Al said Universal, which made Back, has the same square and church in its backlot.

Old-fashioned, ornate street lamps lay on their sides up and down the sidewalks of the town and city exteriors. In the doors you saw round black holes because the doorknobs hadn’t been put in. Al said doorknobs and street lamps were the chief means for showing that a given street belonged to one country or epoch instead of another. Studio teams swept in with the right lamps and knobs before a shoot.

Some of what we saw on foot:
- The soundstages for Ellen and The Big Bang. The Ellen soundstage is huge. It has a couple times the space of the Big Bang playing area and several times the number of audience seats. What the soundstages have in common is pretty much what you would expect from glimpses of soundstages in photos and movies: crosswalks and lights overhead, wood staircases ladders set against the walls, garage-size doors for heavy-duty items (“elephant doors,” Al said), and regular-size but substantial doors for people. A door leads in off the lot, you pass through a little space with glassed-in fire-safety documents mounted on the wall, and then another door takes you into the shooting area proper. The insides of the soundstage’s walls are all covered by insulation held in place by chicken wire. That’s to kill sound.

- Central Perk. The set is preserved in a corner of the props building. The main thing about Central Perk: It’s tiny but it’s crowded with detail. Everything you notice on TV is there, but within an area that’s not much larger than a new college grad’s studio apartment. The furniture itself seems shrunk down. Even so, the group was excited when Al said we could all sit on the couch and pose for official snapshots, which we would receive back at the gift shop. A dumpy Asian couple picked up the big mugs from the table and held them with pinkies out and heads tilted, as if posing at Elsa Maxwell’s. It was a funny pose and Al let it go, but as soon as they put the mugs down he told us we weren’t supposed to touch anything.

- The Dark Knight Batmobile and a Bat-Tank that will be used in the next Batman film. These were in a display room devoted to cars and other vehicles that had been mocked up for Warner Brothers productions. The vehicles look smaller than on screen, but their detail is remarkable—it’s the Central Perk effect. An ornithopter, or something similar, from the studio’s Yogi Bear live-action film made me think it was impossible the film couldn’t somehow be good. The thing looked so convincing, and it had an elegant, involved set of contours. The idea was that it had been rigged from picnic baskets and other random items encountered by the characters.

- A page from the script of Training Day, as annotated by Denzel Washington for his performance. It was the King Kong scene (“I’m King Kong!”), the showdown that destroys his character at the film’s climax. I couldn’t understand any of the notes. Washington appeared to be working out what stresses to give the syllables, except that every word, almost every letter, of the page was circled or written over in black ink. To look at the page, everything was stressed. The page was on display in the studio museum, where you could also see the costumes from Watchmen, The Dark Knight, and The Matrix, and a Joan Crawford gown.

The museum was the last stop. Al showed us the view of the Hollywood Hills that stands in for a Korean mountainside during the credits of MASH. Then we all found ourselves back in the gift shop. Al lined us up to get our snapshots, then disappeared. Afterwards, outside, I wandered the streets near the studio and came across the offices of Sire Records, owned by Warner Music Group. They looked like a ski lodge for swinging singles in the 1960s.