Care for a Smoke? 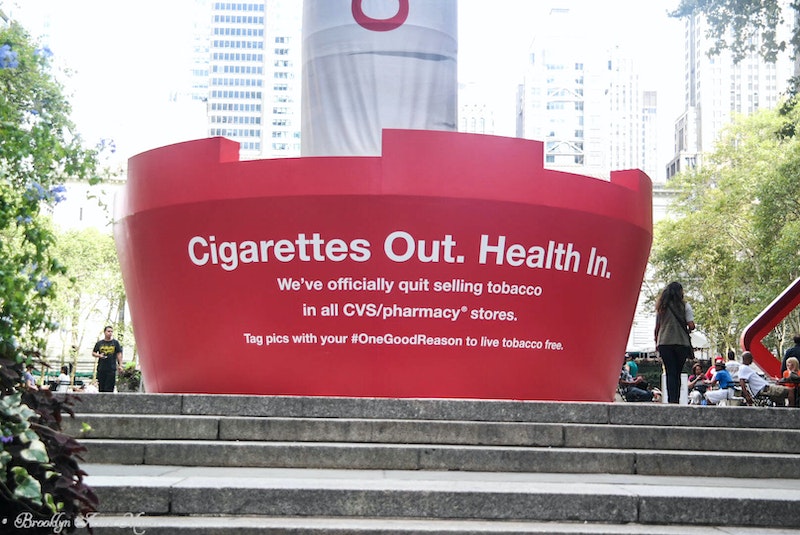 The most annoying thing about CVS Quitting Smoking With You is that they didn’t completely restructure their inventory in line with getting rid of tobacco products. Sell food that people can live on instead of chips, crackers, candy, soda, and dusty canned goods. Get a falafel stand up next to the rotating sunglasses tower, and replace the magazine sections with more batteries and mini-DV tapes. Also, why not built-in urgent-care psychiatrists and therapists? CVS is losing $2 billion a year in revenue and making a big deal about it—huge white curtains covering where the cartons of Marlboros used to be, with a minimal logo that had a real effect on me the first time I walked in after the post-cig era had hit, suspiciously, three weeks early, and it felt like an intervention. “Oh, fuck“ waves of shame and confusion clogging my valves, “it’s here. It’s done.”

I should’ve asked my pharmacist Ben, 100 percent class act, a professional with big cartoon eyes and a giraffe’s face (a giraffe that would star in a Pixar movie, not the disgusting land animal)—why I couldn’t take my medication and step to the left to talk about a thing between me and this girl with another type of professional. Yes, they always ask, and he did today, if I had any questions about the medication I was receiving, and I always say no, because I know what the drug does. Offering the customer information about their prescriptions that could be found on a phone isn’t exactly an initiative for mental health. There’s still such a stigma about going to therapy, and the process of finding a psychiatrist is often inconvenient, confusing, and opaque, and finding a good one even harder. Wouldn’t this create a huge amount of jobs for all the wandering psych majors out there?

CVS isn’t taking a leap of faith or a real hit at all, so the whole thing is disingenuous and, more importantly, inconvenient. If you’re gonna chuck the cigs, at least get some vegetables in the aisles, or little snacks, big snacks, Soylent, anything that a human should eat in one meal. Dried goods, unsalted nuts. Could it really be that bad? Cigarettes are the easy way out: get ride of Coke (and take the Adderall out of the safe). Reinvent the whole CVS brand as the ultimate un-compromised pharmacy of total health, instead of Rite Aid or Walgreens. It really can’t be that big of a gamble to change your entire inventory over the course of a couple months. It’d generate even more publicity and attention, and people will eat whatever's available or nearby. Now that I think about it, I saw an entire end aisle rack filled with unopened crates of Kind Bars earlier today.

Time to step outside. Care for a smoke?