The black sheep of the worst bird family in Massachusetts continues his odyssey away from home. 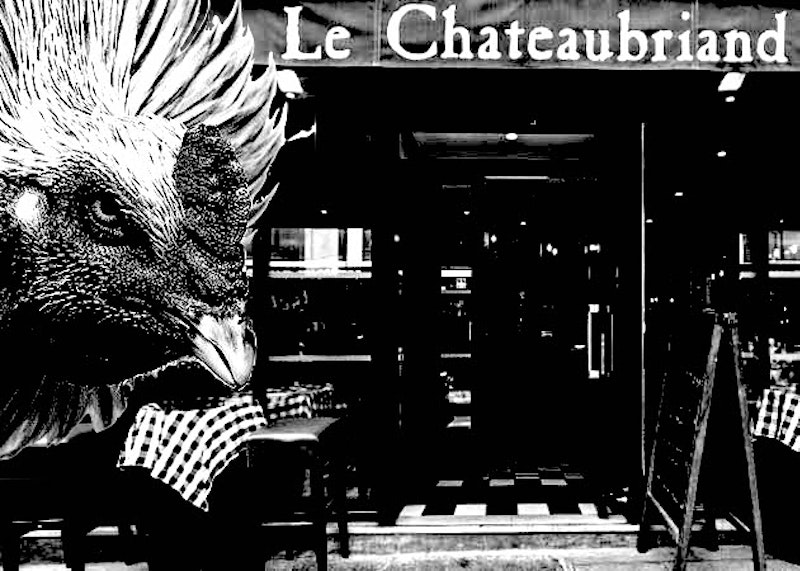 I’ll tell you about my scars. But not today, too hungry. I’d rather talk about flam, or as I like to call it, flan (Spanish cake). I had some when I was staying at the Chateaubriand on Keswick, off some road deep in the New England forest side right by Boston way. I think. These things get confusing, especially when your memories of certain roads and bridges go back centuries. The Charles River was once called… something in Indian, not sure. Anyway, time waits for no one. That’s why I’ve set out on my own. From now on, I am Bennington unchained.

Sitting in the booth at Chateaubriand—a rare restaurant free of pandemic precautions, and, being in New England, free of patrons as well—I pecked at my cow and spied on the waitress, surely getting off too late, eager for someone to rub her feet and bring her flowers. But I was not that bird. The connect I was meeting—Peacock Jill—was typically late. Whenever I fled the Quibbits compound I always asked Jill to give me some supplies for “the road.” This could mean anything from drugs, guns, or painting supplies. I let her know in our own little code that this was something of an “everything trip,” and that we may never see each other again.

“Oh,” she sighed as she sat down. “What a shame.” People have never liked me. Strangers, friends, family: I rub people the wrong way. My cousin Rooster and his wife Monica are the toast of the town wherever they go, but my feathery ass always gets misperceived, misunderstood, left unheard and unwanted. Perhaps God wanted it this way, and if that is His will, then blessed be that it’s carried out.

Nevertheless, I must strive for a better future for myself. Jill gave me the boxes and bags I’d need for the rest of my life and left without even flashing her feathers at the wait staff. I thought she swung both ways—every which way—but maybe disease was the issue. Maybe it was her feathers themselves: frayed, dirty, as if she hadn’t bathed in months. Maybe she hadn’t. I hadn’t. None of us had. It had been a very long year in isolation.

I waited until close, spur-clawed the waitress in the neck and stole her car (she might’ve died, there was a lot of blood and I didn’t have time to stick around and administer Last Rites), and set out on my journey. This was the rest of my life, and I was ready to live it. Jill gave me a pistol for self-defense, a knife for self-defense, painkillers for self-defense, amphetamines for self-defense, and benzodiazepines for self-defense. She also gave me poppers for fun, but I haven’t been in the mood to party for years. Maybe it’s my age but I can’t do poppers without losing my guts on the spot. Cloaca crisis looming—not that anyone wants to hear about that. Moving on…

As I write this, I’m riding the dead highways of the United States, joined only by long haul truckers on more speed than me, with more bathroom blowjobs and pink sores than I’ll ever collect. They’re good company on this long stretch. I may go insane before the night is through but at least I’ll beat the sun: I’ll reach the end of this state before the morning comes. I’m going to see New York, not Boston, for one last time. It’s the city that has always been in my heart, even if I never spent much time there. I’ll take this satchel of drugs, put it in my body, fly to the top of the Empire State Building, and end my life with the self-defense pistol on the highest point I can reach.

These are dreams. We must speak often of the unreal, the mythical, the majestic. It’s not so far from reality as we may think. You have no idea how many people are actively plotting to try and kill you right now. I’ll beat them. I may fail, and will not pull that trigger on myself anywhere other than the uppermost point of the building. If this sounds like some performance art shit to you, fine. I don’t care if you call me Soy Bomb, or blood baby, I’m just trying to live—and die the way I want to. Rooster and Monica won’t be happy about it, and that’s what matters. That’s what matters to me.