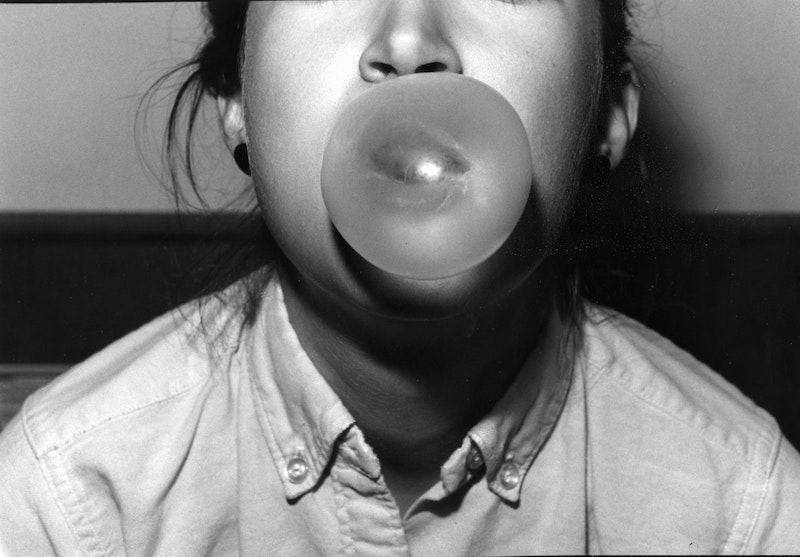 I read recently that sales of Bazooka bubble gum are slipping, which isn’t very surprising, since it’s not often you see kids blowing bubbles on the street. “Bazooka Joe,” star of the tiny comic strip that until recently was wrapped around the gum, is now a character who’s been—like Beaver Cleaver, Dondi, Mr. Ed and the great cartoonist Ernie Bushmiller’s Sluggo—consigned to the annals of minor mid-20th century pop culture. Lots of people still chew, of course—every time I watch an Orioles game, for example, there’s center fielder Adam Jones tracking a fly ball while blowing an enormous bubble—but the part that gum plays in everyday American life has ground to a halt.

When was the last time you heard an insult, usually, for some reason, aimed at women (often New Yorkers, at that), about obnoxious “gum-snapping”? Not so long ago, city and suburban streets were splattered with disposed wads of gum, and like freshly-laid tar, you had to be careful not to get the sticky substance on your shoe. Paraphrasing Dwight D. Eisenhower, give me a week and maybe I’ll remember the last time I had to scrape some gum off a sneaker or boot. Similarly, spent gum was found stuck underneath desks, bus seats and even church pews. (Guilty on the last one, forgive me Father and the officials at Old First Church.)

As a youngster, barely a day went by when I didn’t have a chaw in my mouth, as did most of my friends. There were the good-natured competitions for who could blow the biggest bubble: it was a talent that only some possessed, sort of like snapping your fingers (can’t do it) or whistling (a champ). I also liked Wrigley’s chewing gum, especially Juicy Fruit, but it was second-tier, consumed just for the sugar. And Dentyne, although that was vaguely exotic and sophisticated. There’s one gum—sour orange—that makes me nauseous just thinking about it. It was a new product around 1964, and on one occasion, my birthday, as it happened, I’d eaten a bunch of Clark bars and maybe two packs of sour orange. I awoke in the middle of the night, on the top bunk in the bunk bed I shared with one of my brothers, my head spinning until I puked all over the sheets, an unhappy occurrence that didn’t please my mother one bit. “Why didn’t you have your barf bucket by you?” she asked, as if I knew there’d be gastrointestinal distress at two a.m. Couldn’t really blame her, now that I think about it, since it wasn’t me who had to dispose of the mess.

By the time I was a teenager, I still blew bubbles, just not quite as often. Maybe gum was considered uncool at that point, I don’t remember, but that wouldn’t have put me off. It’s just that I switched to Kool cigarettes. In fact—and this may seem unbelievable today—at Huntington High School, there was an area that was a designated “smoking zone,” where I repaired between classes with buddies, and those who didn’t smoke often chewed gum. Can you imagine such a convenience today? Impossible, and it’s of a piece when every house had an ashtray, even if no one smoked, and lighting up in supermarkets or at ballgames was as normal as breathing. I recall going to the local Bohack’s as a kid, barefoot, and seeing my little league coach Mario puffing away on a Lucky, and no one looked askance.

Last night I asked my younger son if any of his high school pals chewed gum or blew bubbles. He said, “Well, no…” undoubtedly anticipating a calendar-flipping soliloquy from his Numero Uno “dawg,” but then on the tube Mike Napoli and Dustin Pedroia let a pop fly drop into fair territory, dooming the Red Sox to another loss, and I lost my train of thought. Just as well, I guess, since every time I withdraw a nugget from the memory bank, I risk repeating myself, sometimes to the point where my kids can finish the story themselves. Jeez, Dad, you’re a card! Well, heaven forbid they’d use that long-forgotten colloquialism, but you get the idea.

The sliver lining for Brooklyn’s Topps Co. is that Mayor Michael Bloomberg isn’t apt to slap a tax on their sugar-rich, obesity-causing product since it’s going the way of the print edition of The New York Times. I speak for many, I believe, that the world would be better off with Bazooka than the sclerotic Times.