Are We Fat Yet?

A 2500 calorie "pizza burger" is just the latest affront to good health -- and good sense. 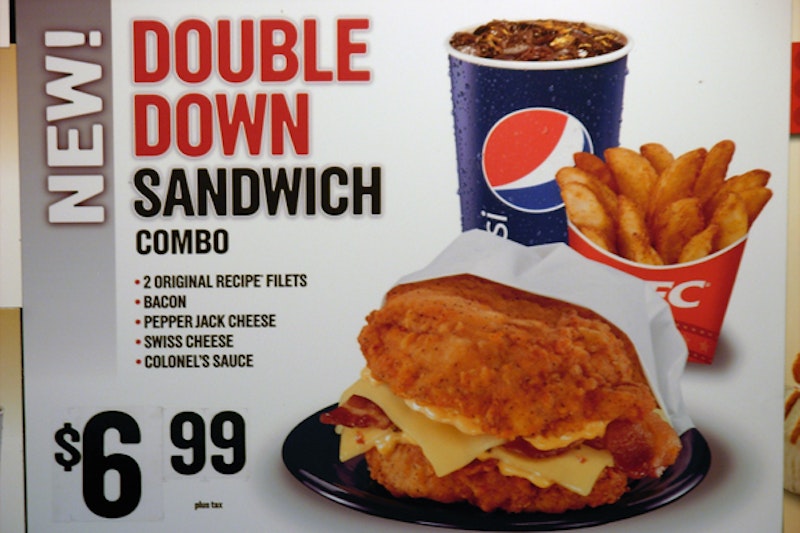 Here’s some breaking news: Eating at fast-food joints can be detrimental to your health.

Okay, so that may not have been a scoop even before the likes of Fast Food Nation and Super Size Me. (Then again, enough attention was paid to Morgan Spurlock’s 2004 documentary—whose basic premise was that if you ate nothing but McDonald’s for a month you’d gain weight and suffer various health-related side effects—that you’d think he’d discovered a new continent.) But while concerns have continued to arise over the nation’s obesity epidemic, the fast-foodies seem intent on offering ever more outlandish consumption choices.

This latest wave started in April with KFC’s instantly infamous “Double Down Sandwich,”  which replaced the bread with two pieces of boneless fried chicken surrounding two pieces of bacon, two melted slices of Monterey Jack and pepper jack cheese, and something pause-inducing called “Colonel’s Sauce.” “This product is so meaty, there’s no room for a bun!” KFC’s website crowed, somewhat robotically.

The site also claims that, in its “Original Recipe” version, the concoction contains 540 calories, 32 grams of fat and 1,380mg of salt. But a Vancouver Sun report published while the sandwich was still being tested claimed that, using estimates based on nutritional information listed for individual ingredients on the KFC website, among other factors, the sandwich actually contained much more than that: “more than the daily recommended allowance in fat (124%), saturated fat (117%), cholesterol (105%), sodium (125%) and protein (194%), as well as 61% of your daily recommended calorie intake.”

KFC disputed those figures—and still maintains its figures listed above—but the story soon went viral before eventually petering out. The Double Down remains on the chain’s menu, even though you may be hard-pressed to find anyone willing to admit they’ve had one.

Earlier this month, Denny’s got into the act (yeah, I know Denny’s isn’t technically a fast food restaurant, but…come on!) with the “Fried Cheese Melt,” which it claims is “the new, extraordinarily cheesy creation that’s got everyone talking.” How cheesy is it? Well, it consists of four fried mozzarella sticks melted inside a grilled cheese sandwich.

Hey, it’s a vegetarian’s delight! And according to Denny’s nutritional information cited by the Gothamist blog, it weighs in with 895 calories, 34 grams of fat and 2565 milligrams of sodium. Take that, Double Down!

But leave it to Burger King to drop the big one: The NY Pizza Burger, which offers enough beef to top a 9.5-inch sesame bun, along with pepperoni, mozzarella, Tuscan pesto and marinara sauce. It’s scheduled to debut in September only at the chain’s Whopper Bar in Times Square.

The NYPB has already been nicknamed “The Fat Bomb” thanks to its 2520 calories (the recommended daily intake is 2500 calories for men and 2000 for women), 144g of fat, and 3780mg of salt, more than double the daily limit for adults.

Burger King’s vice president of global marketing protested to Sky News that the monstrosity is “intended to be shared.”

So what’s with these heart-attacks-on-a-bun (or on two slabs of fried chicken)? Are they meant as a “laugh in the face of atherosclerosis” challenge to the repeated concerns over the nation’s food-related health issues? A test of manliness for the fratboy “I can eat anything” mentality? A come-on to connoisseurs of kitschy cuisine?

No one’s forcing us to eat any of this stuff. But on one of those late nights, when thoughts turn to grabbing something to eat, the mere knowledge that these things are out there.

Naaahh. Tofu, celery and some sparkling water will do just fine.