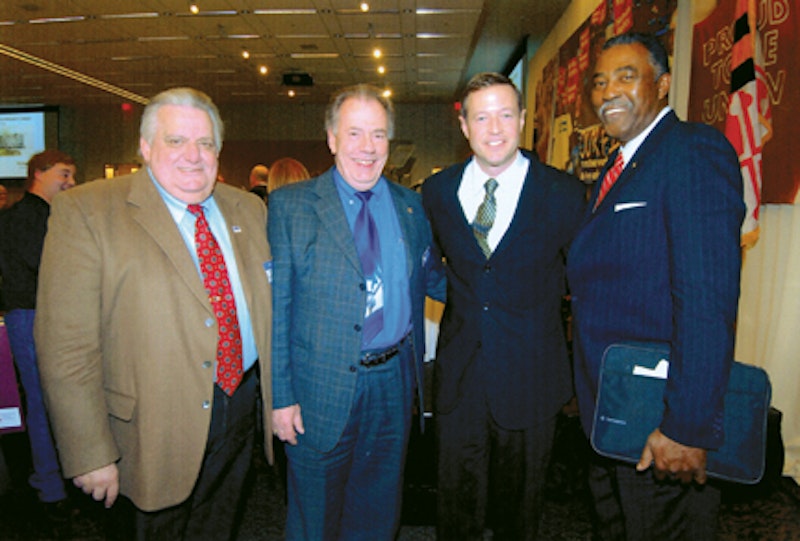 It appears to be the oddest of odd-couple arrangements: The Maryland wing of the AFL-CIO is supporting gay marriage. And in doing so out of simple social justice, organized labor is performing a possible political disservice to Barack Obama, the organization’s presumed choice for president. Maryland is overwhelmingly Democratic, heavily Catholic and one-third black. The Catholic Church opposes gay marriage and already has cautioned Gov. Martin O’Malley (D-Catholic) to put his religion ahead of secular law. Black clergymen have fought attempts to legalize gay marriage as destructive to the family and a sinful redefinition of the traditional union of man and woman and they intend to renew their pastoral fight this year. But strangely enough, labor unions, the Catholic Church and black churches have been locked in synchronicity on many social issues, especially the dignity of labor as outlined in the populist papal encyclical, Rarum Novarum. These days, though, religion is more about sex than salvation and redemption. Labor’s endorsement of same-sex marriage begs the question: Is the leadership speaking only for itself or does the rank-and-file share the sentiment?

As irony would have it, Fred D. Mason, president of the Maryland State and District of Columbia AFL-CIO, is black, religion unknown, and his endorsement of gay marriage is an aberration from the black churches. Mason has a son who is gay, according to The Washington Post. But what about all of those hardhats, steeplejacks, riveters, steelworkers, riggers, bricklayers, building tradesmen and other card-carriers who form that amorphous blue-collar brigade that used to be called the Reagan Democrats and are now classified as swing voters? Especially active in the engagement is the SEIU 1190, whose membership is majority black and represents mainly hospital workers whose loyalties could be torn between union and church. “When push comes to shove, union members, regardless of their personal views, stand on the side of social justice,” Mason was quoted as saying. “This is certainly a major issue for Maryland, and organized labor will not stand on the sidelines.” Okay.

What appears to be an unnatural alliance between organized labor and the gay community may unite Democrats in the State House but it could alienate them at the voting booth. If same-sex marriage becomes law in Maryland, it is likely to be petitioned to referendum by the same group that forced Maryland’s version of the Dream Act, which would grant in-state college tuition to certain illegal immigrants, to a choice by the voters on the November ballot. The twin issues would attract the very voters who are hostile to Obama and could cause embarrassment to O’Malley in his home state just when he is attempting to expand his appeal to a broader audience as chairman of the Democratic Governors’ Association. As a practical political matter, O’Malley and the supporters of same-sex marriage ought to consider delaying their expectations until the 2013 session of the General Assembly and forestall any potential referendum until the 2014 general election for governor. Whoever would win the Democratic nomination no doubt would be a supporter of same-sex marriage and be unbothered by the issue’s presence on the ballot. And there doesn’t appear to be a potential Republican candidate for governor who could exploit the emotional issue.

The black population, union or not, is not the monolith that many portray it to be. The great divide over the same-sex marriage issue begins not in the voting booth but in the pulpits and precincts, especially within the black community. In Baltimore, there has always been a cultural as well as an economic divide between the East side of the city and the West side, with blacks on the West side considered more privileged than those on the economically depressed East side. Another sub-set within the city’s black community is that women are the most consistent and assertive voting bloc as well as a matriarchal force that dominates moral as well as family integrity. Same-sex marriage could be a wedge issue within the city’s black community. There is a secondary issue over same-sex marriage within the black community as well. Many black leaders resent comparing the push for legalization of gay marriage to the civil rights struggles of the 1950s and 1960s and they are determined to separate the two to preserve the historic significance of the bloody battles and marches on the streets of a half century ago.

While the Baltimore’s black population stands at about 68 percent, Prince George’s County’s is even larger at 73 percent and along with it a fast-growing Hispanic population. Again, there is a wide economic and cultural gap between Baltimore blacks and PeeGee blacks. PeeGee blacks are more directed toward the District of Columbia, where same-sex marriage is legal, and they gather their news and views in a separate and much larger media market. The paradox is, however, that it was the black clergymen—and in PeeGee there are black mega-churches with congregations as large as 20,000—who rallied their members and their legislators to help block gay marriage legislation last year when it was pulled in the House of Delegates for lack of a handful of votes after passing the Senate. Yet again, there is a sizeable black presence in Howard County where many of its black residents are well-educated and high-salaried professionals who might have a more nuanced view of same-sex marriage than lower income groupings. Baltimore County, too, has a large black population which, at a time, was the fastest growing black population of any non-black county in the nation.

In 2008, Obama carried Maryland by more than 25 percentage points over Sen. John McCain, propelled largely by the black vote in Baltimore and PeeGee. Obama’s statewide total was 1.629 million votes (61.9 percent) while McCain’s was 959,862 (36.5 percent.) Obama carried Baltimore by 214,385 to 28,681 votes. He romped in PeeGee by 332,376 to 38,833 votes. With Maryland’s growing minority population and two-one Democratic registration, and Obama’s hopes for a blue-state victory running high, any electoral performance short of 2008 could be interpreted as a setback for Obama and an embarrassment for O’Malley.

Organized labor and Maryland Democrats have always had a cozy relationship in the State House. And unions have even enjoyed a happy co-existence with Republicans a half-century ago because of the strong labor presence in Western Maryland and the influence of former Western Maryland legislator and later Congressman, David Lewis, co-author of the Social Security Act and other worker-protection laws. Labor unions deposited their money and their muscle behind Democratic candidates and state officials, especially the Board of Public Works, responded with billions in public works projects such as the Baltimore Metro, the two sports stadiums, collective bargaining for state employees, the prevailing wage and other tangible rewards. And traditionally, a ranking representative of organized labor was given a visible patronage appointment to the Department of Labor, Licensing and Regulation. The current beneficiary is Ron DeJulius, former official of the Building Trades Unions and husband of former Sen. Connie DeJulius. If politics does indeed make strange bedfellows, the coming together of organized labor and same-sex marriage is about as strange as politics gets. But in a bizarre way maybe it makes sense.