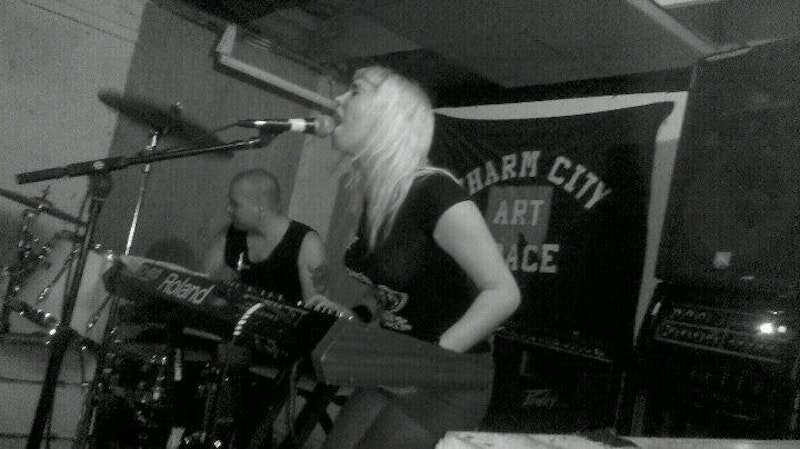 There are two distinct modes of behavior among show-goers, they either move to the music or they stick to the floor. On their eponymous debut Curse, Baltimore electronic-doom rockers Jane Vincent (ex-Abiku) and Logan Terkelsen (disclosure: I played in a short-lived band with him) implore each archetype to cross over into the other’s state of mind.

The record is really about foils. A mythical landscape drawing by Baltimore illustrator Zoe Burke hints at music drawn from a highly personal treetop world in the stars. It’s an effective image for setting up a study in contrasts. The moment lead track “Dog Catcher” hits the midpoint you’ve crossed over from histrionic sludge metal into Earth-like doom pacing that ends in 1980s synth pop crescendos. While the arrangement is laughably absurd in theory, on record the duo make it work.

The middle of an album is dreaded territory for most bands, but this is where Curse achieves its most gorgeous, abstract, and future-thinking moment. On the track “Untitled,” a simple piano and distorted guitar arrangement evokes the best of the Christian Fennesz and Ryuichi Sakamoto collaborations records. Where most would plow sonically through difficult terrain Vincent and Terkelsen stop to meditate on its significance. It is a mature mile marker that is eons removed from any rock or dance-centric associations.

With such grand sounds and ideas it is important to note that the record triumphs in its ability to sound like a live band recording with very little post-production involved. Drum reverb aside, you can hear it in the claustrophobic spacing of the final mix and you can feel it in the shotgun changes that occur throughout the arrangements. The product is reminiscent of the ecstatic-ness of fellow Baltimorean Dan Deacon’s live performances with the appropriate theatricality of a doom metal band. At the end of Curse one is left again to ponder the artwork and its tree house in the stars. It becomes familiar as you realize how fitting a place it would be for archetypes to learn to coexist with their foils, silently watching the expansion and contraction of the world.