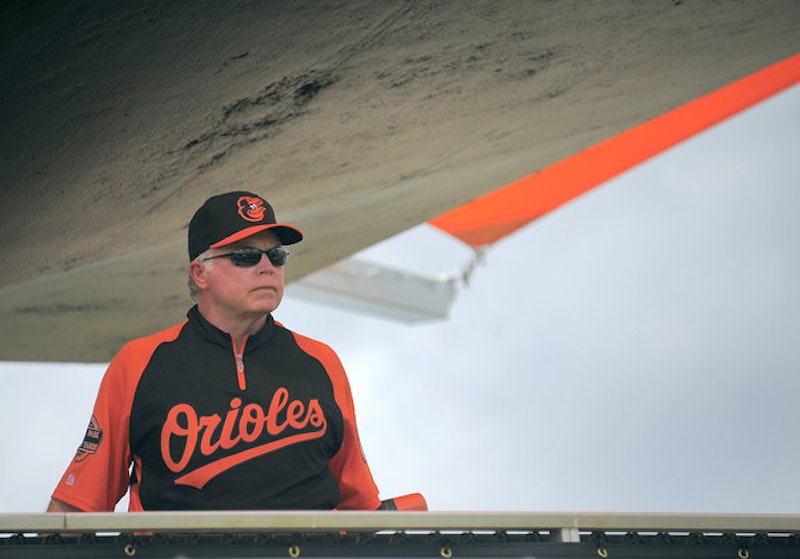 The Baltimore Orioles finally emerged from the baseball wilderness in 2012. Much has been written regarding the franchise’s failures of the previous 15 years but the seeds of the success the ball club experienced in 2012 were planted when Buck Showalter agreed to manage the O’s.

Showalter’s hire came after months of speculation. Rumors swirled that the Orioles were interested in Showalter or Bobby Valentine, both of whom were ESPN studio analysts at the time. Many favored Valentine, including myself, for his somewhat volatile personality and often amusing antics. If Valentine’s Orioles wouldn’t be any good they would at least be interesting. That prophecy came to fruition in Boston last season where Valentine bombed in a veteran clubhouse and was hastily shown the door.

Showalter arrived in Baltimore with a reputation as a taskmaster and a striking resemblance to Hall of Fame manager Earl Weaver. For years Baltimore fans and media had clamored for the return of “The Oriole Way” which was centered on homegrown talent, sound fundamental baseball, and the constant development of young pitching. Unfortunately the club’s woeful player development record, which dated back to the mid-80s, rendered “The Oriole Way” a long forgotten bit of baseball lore.

Showalter’s Orioles went 34-23 down the stretch in 2010 thanks to stellar pitching performances from several members of “The Cavalry,” a term coined by former Executive/GM Andy MacPhail to describe Baltimore’s stable of young starting pitchers. Fans hoped that the strong finish to the 2010 season was a harbinger of good things to come.

The Orioles bombed in 2011.  Most of “The Cavalry” were tossed from their horses early in the season. The club struggled to a 69-93 finish and the prospects for 2012 seemed bleaker than ever. Exit Andy MacPhail and his “Grow the arms, buy the bats” slogan. Enter the once discarded Red Sox GM Dan Duquette.

Duquette and Showalter set out last offseason to create competition amongst the 2012 Orioles. Duquette didn’t bring in any high profile players but he did add considerable depth to the upper levels of the organization. The message was clear: the free ride to the big leagues was over. Pitchers, regardless of their prospect status or draft round would need to produce results if they wanted to keep enjoying the post-game spread and chartered flights.

The true benefit of “The Oriole Way” all those years ago was that young players had to earn their shot at the Major Leagues. Some of them had to earn it over and over again. Players like Bobby Grich, Doug DeCinces, Storm Davis, Don Baylor, Mike Boddicker, and Mike Flanagan all had sustained minor league success and several quick call-ups to Baltimore before claiming a significant role. Even Jim Palmer pitched out of the bullpen for half of his rookie season before going on to have a Hall of Fame career.

But the arrival of Showalter, and also Duquette, has signaled a shift in organizational philosophy. The Orioles on field plans and marketing materials will no longer be dependent upon Baseball America prospect rankings or some trumped up claim to “Come See the Kids Play” as they tried several years ago. Showalter has made it abundantly clear that’s he’s all for watching the kids play if they can actually play (i.e.: Manny Machado).

When Brian Matusz and Jake Arrieta continued to struggle in the early months of 2012 they were sent packing for Norfolk with Chris Tillman and the unknown Miguel Gonzalez taking their place. When Nolan Reimold went down with an injury and Xavier Avery proved he wasn’t quite ready for the big leagues the Orioles summoned former All Star Nate McLouth from Triple-A to play left field. When Zach Britton posted back-to-back lackluster starts in early September Showalter sent him to the bullpen and relied on newly-acquired veteran lefty Joe Saunders down the stretch.

The Orioles under previous regimes would have been content to let Matusz and Arrieta “pitch out” of their funk. They would have allowed Avery to hit .216 in left field because, because what difference would it really make? The Orioles of the past 15 years wouldn’t have dreamed of taking starts away from the promising Britton in favor of Joe Saunders, and there’s no way they would have sent Matusz to Triple-A before his bobblehead night. Showalter’s revolving door at second base may be the best evidence of the organization’s new philosophy. He rotated four players through second base at various times during the season; sometimes opting for offense over defense, or vice versa, dealing with injuries, and riding the moderately hot hand.

Dylan Bundy, Kevin Gausman, and Jonathan Schoop may all be able to help the Orioles next season, but only if Showalter deems them worthy and they perform under pressure. Machado got his shot and latched on to the opportunity. Tillman finally made good on his immense promise. Arrieta, Matusz, and Tommy Hunter earned their way back to the big leagues via the bullpen. Baseball’s biggest surprise of 2012 may have some staying power thanks to a budding, and long overdue, meritocracy.