Remembering Ron Smith One Year After His Death

Baltimore’s talk-radio personality would be aghast at the events of 2012. 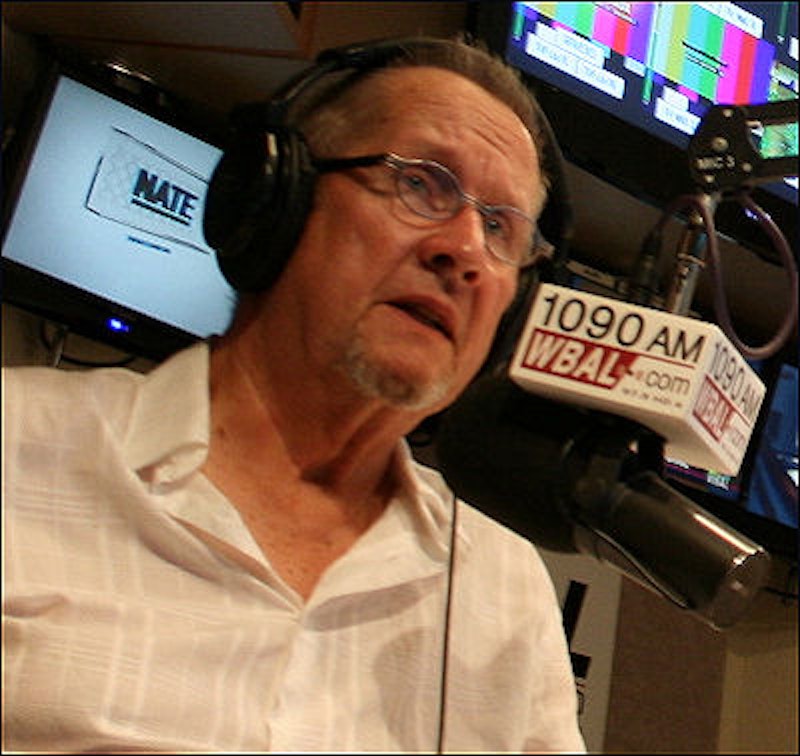 It’s been a year since Baltimore’s self-appointed “voice of reason” was silenced by pancreatic cancer. The world has probably changed more in those 365 days than in the 25 years that Ron Smith was performing his daily ode to pessimism as resident grouch and know-it-all on WBAL Radio. Ron had a simple core belief, the Second Law of Thermodynamics, which roughly translates: sooner or later everything turns to mulch.

Elections have consequences. Same-sex marriage? Legalized marijuana? Obamacare? Fiscal cliff? Obama reelected by a landslide? Obama might appoint at least two Supreme Court justices? The head of the CIA shtupping his biographer? Foreigners awarded cut-rate college tuition? European style socialism? The Arabs and the Jews at it again (or still)? Smith’s man-crush, Ron Paul, departing from public life and leaving his loopy ideas behind with his Senator son, Rand?

This smorgasbord of political palaver, to his fans and followers, is the dystopia that Ron Smith bequeathed us. In the one-man think tank called Smithville, the list is much longer as it lives on, but the point is unmistakable. Democracy is built on chaos. And nobody agonized over it more than Smith.

Even more of a shock wave to Ron’s belief in the “hunters and gatherers” myth, there are now 20 women in the U.S. Senate and 81 in the House of Representatives. So much for the kitchen and the bedroom. This stuff wasn’t even on the apocalypse detector when Ron was last heard from. So what would Smith be thinking now as his compressed little bubble of a romanticized and idealized world appears to be undergoing another of its entropic cycles?

Political taxidermy is risky business. So, too, is necroflackery. Smith, usually laboring under a very dark cloud, would be thinking, and talking, as he always did, as if the end were just a day or two away, sucking the joy out of the room with his Armageddon-y wails of doom and heaven’s foreclosure on life as we know it.

At first, the cantankerous rant resembles schtick or a put-on to tease the audience into a telephone ring-a-thon, which is the oxygen of talk radio. Ron was a terrific mimic. Often it sounded as if he was mimicking himself. But after a few minutes, it’s obvious that Ron was serious. America is going to hell in a handcart. Ron had his own private encounter with the raptures.

Heavy is the head that commands the microphone. Smith was conservative to the innermost layer of tissue. He was often under the influence of the last book that he read from his stack of doomsday volumes. When the book 1992 was published, Ron was convinced we were hurtling back to the Stone Age at whiplash speed with nothing left behind but the detritus of failure (to take his advice). Ron took much of the criticism against him as personal rejection. When Black Swan appeared, Ron believed the end had, once and for all, really arrived. But Ron had a facile mind as well as an expansive vocabulary that could make even the most outrageous proposition sound convincing, especially when his listeners didn’t know what the hell he was talking about.

Ron believed that America was careening toward the same fate as Rome. He often referred to the massive tome, The Decline and Fall of the Holy Roman Empire, as the kind of parallel conflagration that America was destined to follow into the hellfire pit.

But Ron’s aim was slightly off and far to the right on that, too. Gibbon, in his largely unread but often misquoted book, attributes the decline of Rome to the commensurate rise of Christianity and not to Ron’s coded catalogue of bloodsuckers such as Democrats, deadbeats, socialists, deviants, welfare recipients, blacks, foreigners and anyone who opposes Ron Paul’s nostalgic longing for a return to 18th century economics and the gold standard. In America, the reverse is true: Faith is on the decline. Smith and his fellow travelers got it backwards, but that’s what made his show fun.

To Ron, contemporary life, in its unpredictably wondrous evolution, was a total upheaval of the natural order of things. Natural law, it must be remembered, is the last refuge of conservatives. It was inbred in Ron Smith’s brooding nature to contort why we’re here and what we’re doing other than hanging out. Life is about journeys, not destinations. Life is about the ride, so fasten your seatbelts. “Better to travel hopefully than to arrive,” Robert Louis Stevenson observed. But for Ron, every setback, spend bump or detour was the last stop, the end. Thththaaaaat’s all folks!

But Ron got one thing absolutely right. He often characterized the Republican Party as the “stupid” party. The evidence to support Ron’s description accumulates daily. He would delight, of course, in the auto-da-fe of UN Ambassador Susan Rice for no discernable reason, other than that she is, after all, a woman, a Democrat, a liberal and, as they say in police procedurals, a person of color.

There’s a whole new electorate that Ron and his conservative listeners would fail to acknowledge, though it causes a bad case of heartburn, a cohort of blacks, women, Hispanics, Asians and young people. Even labor unions, whose members abandoned Democrats to align with Ronald Reagan several decades ago, are back in the ranks. None of them, for crying out loud, would be Ron’s primal scream audience.

The Republicans in Congress are further alienating the very same constituencies they talk about enlisting to regain and rebuild the GOP into a competitive national party beyond a regional party of the South where it was nearly out-voted on its own turf. President Obama came ever so close to capturing several Southern states, while winning Florida. Smith would have argued, of course, that the Democrats would never, could never, retake the South. But even Texas is on the edge of becoming blue in another election cycle or two.

So now comes Ron’s “stupid” Republicans attempting to dictate the agenda on the “fiscal cliff,” blissfully unmindful that they have just lost an election to Obama in a majorly embarrassing way, lost House and Senate seats while a majority of Americans say the GOP has a tin ear for the voice of the people: 51 percent of the voters chose Obama over Mitt Romney; 60 percent of Americans favor raising taxes on incomes over $250,000; and 67 percent say keep your money-grubbing hands off Social Security and Medicare. Vox populi is in harmony with Obama in the polls and on the issues.

At this point, Smith would meander off on an arcane lecture about the debt and the deficit, the two protective shields of the GOP when, in fact, neither is relevant in the short term where interest rates on borrowing are near zero and jobs and growth are front and center above all else.

Especially irksome to Ron would have been Obama’s forceful campaign pledge to raise taxes, probably the first since Walter Mondale’s suicide promise in 1984, and a rub against Ron’s belief that a person is worth only what he contributes to society and earns by his sweat or intellectual heft. How dare the voters agree with the President and not side with Ron? With Ron, it was not so much ego as the conviction of ideas, right or wrong.

Smith was no Republican, mind you, at least not late in life. He was registered as a “decline,” or independent, but his heart and mind were more attuned to the libertarian entry in the ledger, whatever indefinable political flavor that is. Or was he actually the last Tory disguised in a t-shirt and shorts? But one point Ron would have applauded was Speaker John Boehner’s (R-OH) appointment of all white males to the 19 major House committee chairmanships (see “hunters and gatherers” above.) He had little regard for women in high places that belong, by tradition and Ron’s misogynous dictate, to men.

If Smith had written many of his thoughts and notions as a straight man for Saturday Night Live or The Daily Show they would have been translated as social satire.

To be sure, Maryland Gov. Martin O’Malley (D) would have been held up for special scorn and disdain for his success in advancing gay unions and the state’s version of the Dream Act, the first a redefinition, in Ron’s words, of the sacred institution of marriage, and the second, subsidizing foreigners to displace American kids from a limited number of available college slots. If even Ron’s praise could turn the air blue, think how dark his proud and profane Marine barrack’s curses on those issues would be.

In death, as in life, being Ron Smith is a heavy burden because he lives, unforgotten, long after his work was done here on earth, in a world where he was physically comfortable but his restless mind and his time in the continuum of history can be measured in a single word: unforgiving. Ron Smith’s is an unquiet grave.

—Frank A. DeFilippo was Ron Smith’s liberal sidekick on WBAL Radio for 22 years.