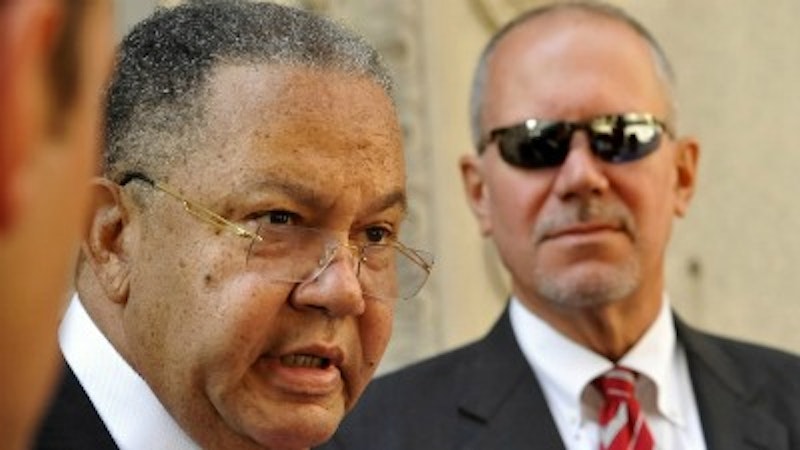 Smart politicians don’t lay out their devious little schemes in writing. Nor do they discuss them on cell phones or in e-mails or any other device that leaves electronic fingerprints. In the bad old days, they simply strolled to the men’s room, activated the plumbing and conspired behind a protective roar of flushes and gushes that defied audible detection. So in case anybody hadn’t noticed, Paul Shurick was convicted of fraudulent practices which amounted to voter suppression under a law that was enacted in 2006 following deceptive practices by the campaign of former Maryland Gov. Robert L. Ehrlich Jr. (R), which Schurick also managed. Now maybe the message will go out to the 14 states that have enacted 25 laws aimed at depressing the vote of minorities, senior citizens and young people who don’t carry driver’s licenses or other official photo documents of themselves. Those states are engaged in the same form of deceit only with the imprimatur of the U. S. Supreme Court, which has upheld the validity of photo ID requirements.

In Shurick’s case, though, the prosecutors had the goods. They had memos. They had cell phone records. They had e-mails. And they even had the doodling of an aide to political consultant Julius Henson that said, “suppress black vote.” It was the aide’s voice that recorded the robocall that was directed to 112,000 mostly minority voters in Baltimore City and Prince George’s County that was described as “counter-intuitive”—telling voters to relax, the election was over and won. Henson’s verbal somersault supposedly would excite them enough to go out and vote for Ehrlich in jurisdictions that are nine-one Democratic. For this flim-flam, the Ehrlich campaign was paying Henson $16,000 a month with a promised bonus of $30,000 if Ehrlich had won the 2010 campaign to reclaim the governorship that he lost to Gov. Martin O’Malley (D) in 2006. Henson had originally proposed an elaborate $600,000 scheme of voter deception which Shurick claimed to have rejected. There was also a campaign document labeled the “Shurick Doctrine” which outlined a plan to confuse and otherwise discombobulate voters. But in the final desperate hours of a losing campaign, records show that Shurick gave in to Henson’s nonsensical notion of how to deliver the vote by twisting the language into bizarre garble. Henson will be tried separately in February. It’s also a twist that Ehrlich himself rejected Henson’s services in 2002 after Henson had a falling out with the campaign of Kathleen Kennedy Townsend over his description of Ehrlich as a “Nazi.” At the time, Ehrlich characterized Henson’s proffer as “blackmail.” Politics does indeed make strange bedfellows.

The Maryland law is very clear. It says that a person or campaign cannot “willfully and knowingly… influence or attempt to influence a voter’s decision whether to go to the polls to cast a vote through the use of force, fraud, threat, menace, intimidation, bribery, reward, or offer of reward.” The law was adopted after the Ehrlich campaign attempted to mislead voters by circulating flyers stating that the election was on Thursday (instead of Tuesday) and suggesting that Ehrlich had the support of black officials in Prince George’s County (which is 75 percent black.) The law was originally vetoed by Ehrlich. Shurick’s attorneys now say they will execute the old dipsy-doodle by transforming the conviction on voting rights fraud into a First Amendment appeal of protected speech. The final twist of the blade will be if Henson’s trial has a different outcome than Shurick’s.

President Obama stood behind a 21st Century podium and used early 20th Century symbolism to lecture on the failure of 19th Century economics. Obama has finally found his voice. In his speech in a small Kansas town in the middle of America, Obama drew the sharpest contrast yet between the policies of Democrats and the trickle-down economics of Republicans and laid down what certainly will be the battle lines for the 2012 presidential campaign.

“This is the defining issue of our time,” Obama told the audience of 1200 in the Osawatomie High School gymnasium. “This is a make-or-break moment for the middle class and all those who are fighting to get into the middle class. At stake is whether this will be a country where working people can earn enough to raise a family, build a modest savings, own a home and secure their retirement.” Obama has finally taken possession of and, in fact, has won the debate over middle-class tax cuts, which is reflected in his rise in the polls and in the GOP maneuvering in Congress to seek a face-saving compromise. By contrast, the latest Gallup Poll reveals that 76 percent of the respondents say that all members of Congress should be voted out of office.

The town and the tone were borrowed from Roosevelt, only this time Theodore, a Republican president, who 101 years ago chose Osawatomie to deliver a speech called the “New Nationalism” in which he argued the case for a strong central government.

Obama’s speech was designed and timed to resonate with the sudden surge of populism on the streets of America and in cities around the world where demonstrators are protesting injustice and inequality in the distribution of income and wealth. He even borrowed the street-chant, “99 percent,” to flavor his address with the voice of the people. And it came at a time when Obama is battling Congress over the extension of jobless benefits and payroll tax cuts, which expire on Dec. 31. Obama also used the occasion to markedly demonstrate how far the Republican party has strayed from its taproot in Lincoln and Roosevelt to a party of tax cuts for the rich and deregulation for business. What’s more, President Herbert Hoover’s adherence to supply-side economics plunged American into the Great Depression of the 1930s and President Ronald Reagan’s approach to trickle-down economics in the 1980s racked up the largest debt and deficits in history up to that time.

“Their philosophy is simple: We are better off when everyone is left to fend for themselves and play by their own rules,” Obama said. “Well, I’m here to say they are wrong… We shouldn’t be weakening oversight and accountability. We should be strengthening them.” In fact, virtually every Republican candidate for president has made its campaign hallmark to point out which federal departments would be eliminated and which regulations would be abolished, mainly education, environment and energy. It was the systematic deregulation of government that began under President Ronald Reagan and continued under President George W. Bush that helped contribute to the near collapse of the economy three years ago. Not a single person has been prosecuted for the abuses that were committed by the nation’s major financial institutions.

As if to underline Obama’s speech and his criticism of the Republican theory that more money at the top creates more jobs at the bottom, a new Federal Reserve report, released last week, documented that household net worth dropped four percent in the July-September quarter while corporations amassed cash and profits of more than $2.1 trillion, proving once and for all that trickle-down economics doesn’t trickle down, it trickles up.

Maryland Gov. Martin O’Malley is on a roll. To where nobody knows, but it certainly massages the ego. His fellow Democratic governors, all 20 of them, took the unusual step of electing O’Malley to a second consecutive term as chairman of their association. Normally the job would rotate after a year to the Democratic Governors’ Association understudy vice chairman, in this case Gov. Beverly Perdue (D-NC). But she faces a tough campaign next year. The assignment falls to O’Malley, in which he delights, to raise funds to help elect other Democratic governors and candidates in 2012. Eleven states, eight of them now in the hands of Democrats, will elect governors next year. This year, under O’Malley, the DGA raised an unprecedented $11 million and was two-for-two in governors’ races, winning in Kentucky and West Virginia while losing in Louisiana and Mississippi, which were already under Republican control.

O’Malley’s back-to-back elections as DGA chairman give him a strong national voice in Democratic politics and access to the national media, especially the talking-head television programs, moderated by many who are his constituent-residents in the Maryland suburbs around Washington. Already O’Malley’s being labeled an attack dog, and his favorite target has been New Jersey Republican Gov. Chris Christie. “I think people have arrived at a different point in our collective discussion about our economy,” O’Malley was quoted as saying in The Washington Post. “The genius of our country has been capped, sold short and grossly undercapitalized in the name of concentrating wealth in the top one percent… we need to focus on the 99 percent when we make policy—we are all in this together.” If anyone has a sudden attack of echolalia, refer back to the section on Obama’s Kansas speech.