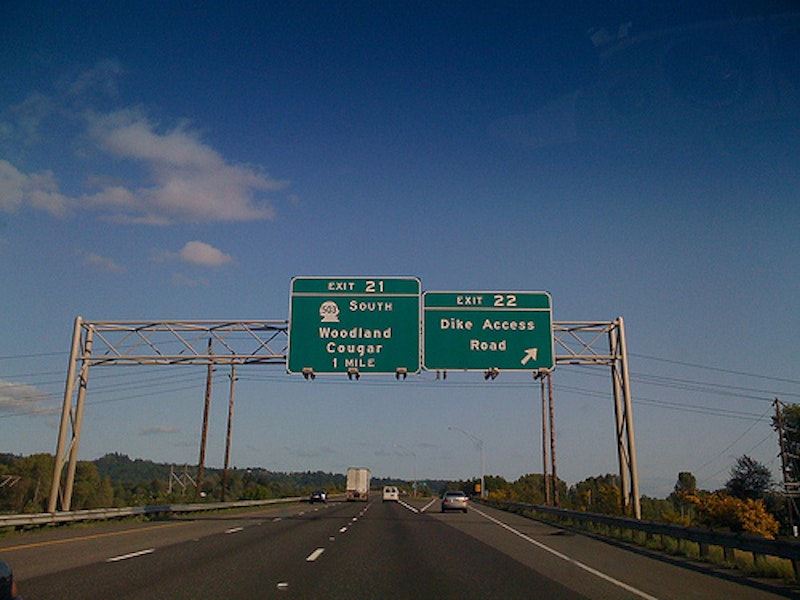 Pedal to floor on I-80E towards Lincoln, Nebraska at one a.m., endless dark stretches of cornfields occasionally lit by a passing trucker rest stop or distant farm house, trying to close out a 14+ hour drive from Utah, north of Salt Lake, I thought of jerking the wheel hard to the left, slamming the car into an oncoming embankment. The crash would be glorious. Fiery wreckage thrown across the expressway—a charred arm here, part of the rear fender there. The romantic dream of the open road can fray and wear thin in the early morning hours: empty cigarette packs thrown across the dash, near-crazy from amphetamines, cheap energy drinks, shitty gas station coffee, a PMS-ing ex-girlfriend next to you, who when you'd met up with her again earlier that week (nearly two years to the day in fact since you'd broken up) it was immediately obvious why it hadn't worked out. The next eight days would be spent wondering how you'd remained on good enough terms to undertake this damn trip.

But let's back up: I flew into Portland, OR on a Monday, leaving Baltimore mid-afternoon and landing on the west coast sometime after nine that night. The ex-girlfriend picked me up from the airport and we headed to a near-empty dive bar close to her apartment called the Triple Nickle, home to cheap PBR tall boys and free darts. The Modest Mouse songs blaring from the jukebox convinced me (after enough PBR) I should ask around, try to get an address for Isaac Brock's house. I'd knock on his door, offer up a big bag of shrooms, and talk him into taking me around the city for a day. We'd end up in Stephen Malkmus' basement at four a.m., taking huge rips off a bong that James Mercer had left there last Halloween, spinning Ramones records and talking about how faggy Vampire Weekend is. Sadly, I found out through MySpace that Brock was out of town, touring the mid-west. Instead I spent the next day getting high, driving around listening to The Lonesome Crowded West on repeat, hitting up record stores for CDs by local Portland bands, going coffee shop to coffee shop for free Wi-Fi.

Walking down Hawthorne St. I was stopped by a hot twentysomething Greenpeace worker, a theater major from Ohio State who had moved to Portland after graduating, took up jobs stripping and waitressing to pay the bills before apparently realizing her true calling was to join the fight against destructive mining practices in the Oregon Rockies. After she talked me into donating $20 a month (have to remember to cancel that) I asked her where she used to strip, and she gave me directions to a place called Sassy's in the SE district. I was told by more than one person that Portland has more strip clubs per capita than any other city in America (same with coffee shops and small breweries). If Sassy's is any kind of indicator they also have more hot-ass fucking strippers (industry term) per capita as well.

This was, somehow, unaccountably, my first time in a strip club. They're odd places, like the sleazy old-time triple-X porn theaters, except the social contract is still in place. There's something bizarrely Puritanical about the whole thing—the "look but don't touch" rubric: The naked body is not itself a sin; "deceitful lusts" (Eph. iv. 22.), however, are. I've had my fair share of tits bouncing around right in front of my face and the first instinct has never been to take another sip of Bushmills and fumble through my pockets for a dollar. Getting you worked up isn't really the point though.

After a while I was the only one left sitting up front, so the girls wouldn't so much come out and dance provocatively as they would come out, undress, and talk to me. "How do you like Portland?... I've been to Baltimore once... You should really check out blah blah blah while you're here..." It's hard to know what to tip for this. One of the girls went by the name Luscious, after a stripper in Russ Meyer's 1966 pseudo-documentary Mondo Topless. She told me she was an aspiring filmmaker who had a B.A. in film and television studies from UCLA. When she found out I was from Baltimore she went on and on about how much she loves John Waters. I gave her $40.

It takes at least six hours on I-84E until you're out of Oregon, winding along the Columbia River most of the way, past small towns with names like Hilgarde and North Powder that look like they're made up of a gas station, a McDonald's, and a half-dozen or so houses. The thought that kept coming back during most of that first day of driving—roughly 12 hours from Portland to Ogdon, Utah—was, "Who the fuck lives out here? What could you possibly be doing out here?" Do you have to be in born in a town like North Powder (pop. 489) and then just decide to stay put? Or was Baker City (pop. roughly 10,000) maybe a little too cosmopolitan for you and you wanted some peace and quiet for once? I guess having been born on the East Coast I'm a little confused. I too grew up in a small town: Smithsburg, MD (pop. 2500). But with Baltimore and D.C. both an hour away my experience of country livin' is probably a little different than someone who grew up in Durkee, OR. Oregon itself is almost eight times the size of Maryland. It would take me far less time to drive from Smithsburg to downtown Manhattan than it did to drive across Oregon. And for a drive where you could go an hour and see only about a dozen other cars, the number of "Tune To 1620AM For Traffic Info When Lights Are Flashing" signs is astonishing. Trying to imagine scenarios for when these signs might be useful could last you most of the way through Wyoming. (Stage coach jack-knifed into a herd of bison?) I thought of the long stretches of highway in front of me—3000 miles in five days, up through the Rockies and on into the mid-Western plains—and the friends in touring bands from back East who must have made this drive more times they can even count by now. I lit a cigarette, turned up the radio, and settled in.