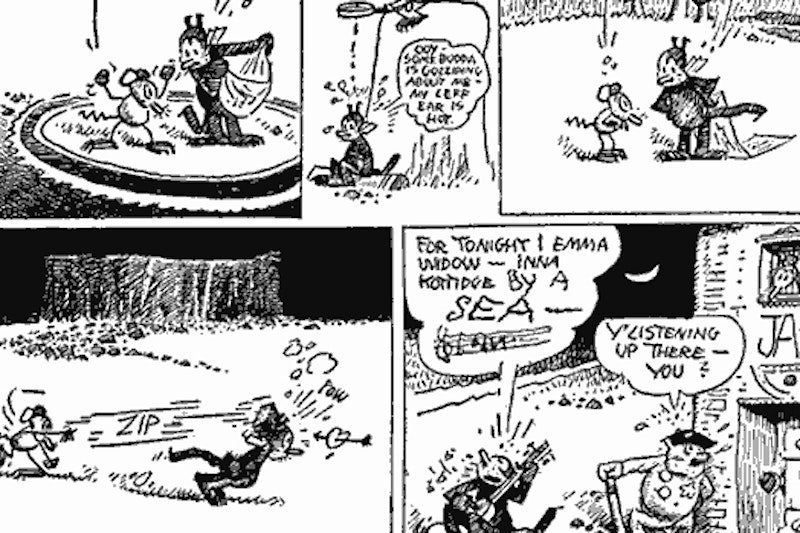 Jay Cantor wrote Krazy Kat in 1987, before Michael Chabon wrote The Amazing Adventures of Kavalier and Clay and before Jonathan Lethem wrote Fortress of Solitude. Krazy Kat contains no superheroes, since Cantor has borrowed most of his characters from Coconino County, home to the titular Kat and setting of the celebrated comic strip. Drawn by George Herriman, the strip ran in the Hearst newspapers from 1913 to 1944. It bears little resemblance to our contemporary comics. The action in Coconino County took place on a full page, and the characters had room to do and say more than, say, Garfield or Beetle Bailey.

The core cast was small: Krazy Kat, a natural philosopher and great mispronouncer of words (before Family Circus made the practice nauseating), Ignatz Mouse, who paid no attention to the law or to Krazy, and Offisa Bull Pupp, a bulldog cop who kept the peace in Coconino. Krazy, it so happens, loved Ignatz, and Offisa Bull Pupp loved Krazy; Ignatz, however, did not reciprocate the love of the Kat. He preferred to hurl bricks at Krazy's head. Krazy took this as a token of affection and Bull Pupp took it as a crime. Many strips ended with Ignatz locked in Coconino's jailhouse.

Cantor uses Kat & co. as a cast, letting them loose in five vignettes. The technique is academic. We see Cantor's various themes through the opinions of the Kat, the mouse, and the bulldog: character steps in for theory. His themes too have an academic resonance, and Cantor aims high: he begins with Krazy reacting to the development of the atomic bomb (which coincided with the end of the strip's press run), passes through Freudian psychoanalysis and revolutionary theory, skewers the culture industry and ends up in an intense consideration of the link between violence and sex.

Cantor doesn't just decorate his novel with these themes: his characters literally live through them, like performance artists. In the section on psychoanalysis, for instance, Ignatz gives a virtuoso reading of Freud by treating Krazy's neurosis—it's edutainment and I love it.

Krazy's neurosis, which she picks up in the first chapter, drives the plot (which scarcely matters because the characters and images are so dazzling). Krazy and Ignatz have been out of work, and Ignatz, always meddling, takes her to see the atomic bomb tests at Alamagordo—after seeing the horror of the bomb Krazy changes; a piece of fallout burns a patch of her perfect black fur white.

After this, Ignatz's bricks begin to hurt, raising stars of pain rather than hearts of foolish love. Coconino County is a plastic place, and Cantor paints its shifting landscape, mesas blurring into clouds and clouds precipitating into cactuses; cartoon Krazy stands still against the backdrop, but after the tests she has to change, she cannot repeat her triangular drama with Ignatz and Bull Pup. No wonder Ignatz reaches for Freud.

So the rest of the book details Krazy's efforts to become a person, what she calls "round," as opposed to flat, like a cartoon or movie. Ignatz suggests that sex might be the best route to this, though he has only a hazy idea of what sex is; "I think they pee in each other," he writes in a letter to Bull Pup. Since Krazy starts out as a full-fledged, interesting character her change works as a classic psychological narrative—she may think of her transformation as change into a new person, the fallout "giving her an inside," but really she is becoming more herself, emerging rather than transforming.

Despite all its melting landscapes and intense theoretical involvement, Cantor really devotes his novel to character; Kat and mouse both grow and change throughout the narrative, but because they are cartoons Cantor can let them act these internal changes out in arrestingly direct ways. Krazy, for instance, goes rigid after some traumas (Ignatz compares her to "a Danish Modern coffee table"), and Ignatz has a chance to try his crackpot theories, playing psychiatrist, producer, and revolutionary in turn.

Cantor does eventually shift away from the cartoon in the final chapter, "Venus in Furs," which he originally published on its own in Playboy. Krazy appears here as Catherine Higgs Bosun, patient of Doctor Ignatz and daughter of a prominent physicist—a woman, not a Kat. Ignatz and Kate (Krazy Kat's new-minted name) waste no time in transgressing the doctor/patient relationship and plunge into a sexually inventive affair.

In this final chapter the Kat is no longer strictly speaking a cat, Ignatz no longer a mouse, and Coconino resigns into Boston. We're definitely still in a cartoon, one that stings and saddens the reader but in places lets the candy colors and startling lines of Herriman's original vision shine through. Kate and Dr. Ignatz are cartoonish in the manner that most people I know are cartoonish—they fight, mock, and joke ferociously but not unrealistically. When Kate, drunk in some horrible bar and separated from her mouse, leaves Ignatz messages on his answering machine we smile and cringe at the same time, but we never doubt that Kate the Kat would taunt him so:

"I'm in Paris and I miss you terribly, darling, I wish you were here with me. Why couldn't you have turned a new leaf over, so your baby could be your slave? Oh Ignatz," she snuffled, "Why couldn't you behave?"

Ignatz, still a lover of technology, replays the message to search for "French-sounding static."