The Indian security complex is a frightening beast. 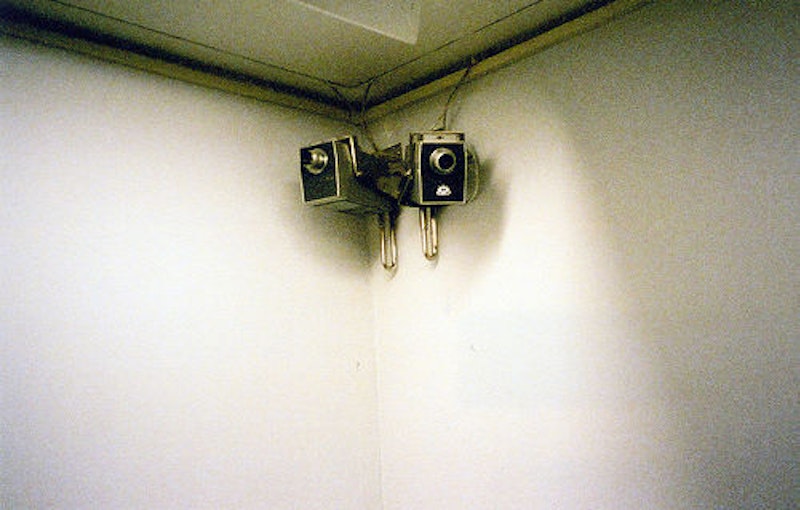 The bureaucrat opened the envelope, looked up, and said, “You have four days to leave the country.” My American friend was devastated. After a week spent in the vicious grasp of Indian red tape—waiting in hours-long lines only to be told he needed one additional form, waiting several more hours for that form, no one able to tell him where to go, muddled regulations and procedures—he thought he’d had finally straightened it out. He was given an envelope in one office to take across town to a different office. At the final office, they brought out the verdict and told him he was deported. He spent a week of his life accidentally kicking himself out of India.

Figuring out the day-to-day laws of life can be frustrating and confusing, but it’s the security side of the law that is most imposing. When you go to a country like, say, Israel, you expect security. You get grilled by security before you can even check in for your flight, you are constantly passing through military checkpoints throughout the country, and metal detectors are seemingly built into every entrance. You know you will see it, you hear about it all the time on the news, and Israel—above all else—is probably identified by its wars and security concerns. India, though, doesn’t evoke quite the same imagery. Despite a recent highly visible massive terror attack—the Mumbai killings in late-‘08—security isn’t the first thing that people are worried about. Before I left, most people were rightly more concerned about the disease content of the food I’d be eating.

The Mumbai terrorism, where a dozen or so people held the nation’s economic engine and largest city captive, seems like evidence of a state whose attentions were focused elsewhere. Indian security can certainly seem inane. There are the puzzling new laws about not returning to the country for two months after exiting. Another friend had to say goodbye to his American girlfriend for two months as she was forced to up and leave the country due to the new regulations. I haven’t figured out exactly why this is supposed to make India more secure, but I have friends that are seriously concerned about their booked-before-the-law-went-into-effect travel plans.

Silly though it may be, Indian security is certainly not absent. There are Israel-levels of security in places, especially here in Delhi. Every mall is guarded by soldiers and metal detectors, a friendly pat down awaiting at each entrance. Security guards stand outside every quality restaurant and bar, even if their presence seems more to ensure the establishment is filled with the “right people” (read: foreigners, upper-class people). Middle class neighborhoods and above are heavily gated fortresses, with police and private security watching the entrances. Hotels have massive concrete barriers, and fairly intense security that checks the trunks and undercarriages of cars and pats down everyone coming in. You’re not allowed in the airport without a boarding pass or itinerary and a passport, checked by armed military guards.

Most of this security is a joke—theater and little else. Probably 60 percent of the metal detectors are noticeably off, unplugged, or broken. The security guards’ pat down is largely ceremonial. As a foreigner, it’s as if I’m not a threat. I’ve set off metal detectors and simply been waved through, I’ve received noticeably gentler checks, I’ve been allowed to keep my wallet in my pocket when those around me have had to empty theirs.

Most of the security is a farce, but—mirroring the stunning duality of most aspects of Indian life—there are two Indian securities. The first is the occasionally unmanned, often unplugged, and likely broken wooden metal detector at Qutb Minar. The second is the military lockdown of the Metro stations. Riding the Metro is fascinating—I wasn’t even allowed to bring my empty soda bottle with me (and, as there are no trashcans, I had to go upstairs and exit the station just to find a proper—albeit overflowing—trash receptacle). Armed military send you through a real metal detector, pat you down heavily, wave the wand over every inch of you, send all your bags and belongings through an X-Ray, and are stationed at key points throughout the station, keeping a watchful eye.

Given the size and scale of the nation, the thought of India as a security state is bizarre, and the strong presence is sometimes unnerving. When the security is real—like in the Metro—it’s very real. A couple weeks ago, I went to the Republic Day parade, held in the heart of New Delhi’s administrative core. Within a mile of the parade, all of the streets were completely empty and shut down—an odd site in a city bulging with traffic. A mile before the closures, there were additional police barriers set up, checking IDs and every car that came through, including a very thorough check of my drivers license and credit cards, a rarity given my foreign-ness and, honestly, a pleasant surprise.

Once my friend and I got to the parade area, we were stopped with the security I was used to, a brief pat down that required an inspection of my cell phone. I thought we were home free, but we walked two feet into a metal detector and then had the wand waved over us. Of course, they then found our cameras, which were apparently prohibited, and had to go all the way back to my apartment to drop them off (they suggested we drop them off at a nearby snack stand, but, uh, I declined).

When we finally made it back, we made it through pat down one, made it through the metal detector and wand shakedown, and I thought we were finally through. But no, to get onto the sides of the boulevard (where you could see the parade) you had to go through yet another round of military security. This time, it was even beyond airport-level restrictions. I was forced to leave behind my gum and hand sanitizer. I got a pat down the likes of which I’ve never received before—a truly invasive groping that, honestly, is the only way to do a proper check. People had to remove their hats and headscarves, baggy clothing was rung tightly, scarves were closely inspected—they even went through my wallet, to make sure I wasn’t hiding anything in the fold.

The Republic Day Parade was one of the occasional reminders that India lives in a dangerous neighborhood. The security was, of course, the most visible reminder, but the parade itself was a bizarre display of military pride and power. The festivities kicked off with a rather strange ceremony granting medals of honor to a small parade of military men that had—in operations with various Hindi names—“killed terrorists” in the past year. Most of the operations took place in Kashmir, but there was a sense of incredible distance, a 1984-like groupthink where the death of far-off enemy “terrorists” was the pinnacle of patriotic service.

This segued into the oddest display of military power I’ve seen in person. I don’t know if it’s a remnant of the socialist legacy or some sort of obsession with technology, but the entire military arsenal was trotted out in front of the cheering crowds. Imagine going to an American parade and having the entire cadre march past you. Our parades come into two varieties: the commercial, like Macy’s, and the hyper-local (where, yes, you may see a veteran here or there, but the marching bands are made up of 15-year-old band geeks instead of armed soldiers). If you saw pictures of China’s recent celebration, you have an idea of what I saw.

With the announcers describing in lengthy detail the production and function of each vehicle, everything went past us. It wasn’t just the impressive tanks, the fighter jets on the backs of trucks or the humvees—it was really everything: random communications trucks, RADAR trucks, missile launchers, giant missiles, everything. Amid the war machines, a dozen or so units—dressed in colorful, traditional, ludicrous-looking uniforms (a cross of British starch and a whacked-out Indian headdress)—marched in unison, military marching bands leading the way. The chatter around me was fascinating. Everyone knew the names of the units, the names of the jets and tanks, and the names that they didn’t know made their way through the crowd as a murmur after they were announced, as if being committed to collective memory.

It’s easy to forget how quickly this corner of the world is militarizing. India has lengthy, disputed borders with China and Pakistan, borders over which multiple wars have been fought. The threat that one of these three nations provokes the other is always real. However, the word “threat” needs to be emphasized here. The public health concerns like diseases and stray dogs are not threats—they are real issues that are killing people. Seeing ballistic missiles trotted out a mile from the slums is a truly dissonant experience.

And then, there’s my friend. If you plan on staying in India for longer than six months at a time, you have to register within two weeks of entering the country. My friend planned on leaving before the six months, but ended up getting a new internship in the last few weeks. He tried to extend his stay—before the six months were up, obviously—and embarked on his journey into Indian bureaucratic hell. He was spit out, racing around the city, tying up his loose ends, and getting ready to go home early. Here is someone who came here to work for free in the service sector and provide help to a population that could really use the extra hands. And now he’s gone in the name of security.