The Nexus of Worlds 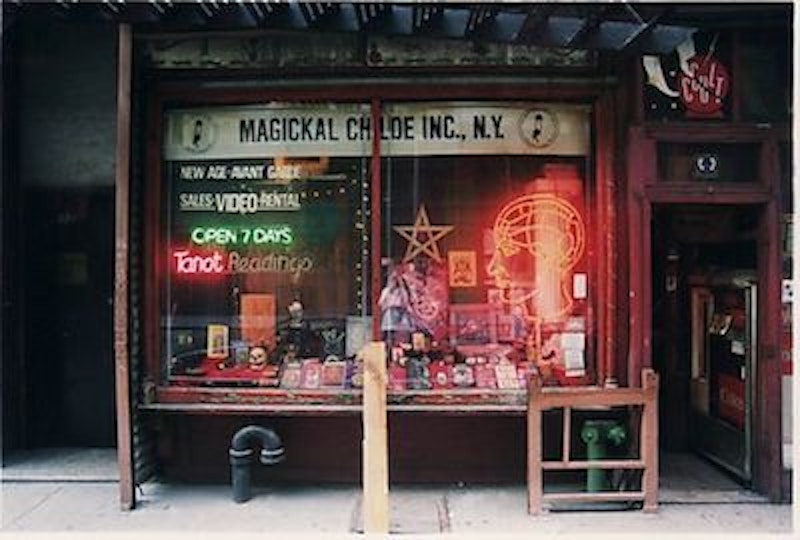 Forty years have passed since I first set foot in the Magickal Childe, Herman Slater’s legendary occult emporium and bookstore. I’ve had a lot of weird jobs in my life, but my on-again, off-again tenure working for Herman was definitely the weirdest. That shop was the nexus of worlds, something out of a science fiction/fantasy novel, where all lines converge. It was the one-stop shop for every essential tool, ingredient, or text related to sorcery, voodoo, hoodoo, wizardry, witchcraft, and thaumaturgy. Absolutely nothing about the place was even remotely normal. In retrospect, it feels like a dream.

I’d been searching for Aleister Crowley’s Ordo Templi Orientis. I’d started on the Crowley thing with Llee Heflin’s Island Dialogues in 1974, and I rapidly dove right into the deep end of the pool, reading every bit of Crowley and Crowleyana I could. At the time, there were four primary competing groups claiming to be the authentic successors to Crowley’s fraternal pseudo-Masonic enterprise. I was in correspondence with all of them when I came across an ad on the back page of the Village Voice announcing that the OTO would be performing their public ritual, the Gnostic Mass, in the back room temple at the Magickal Childe.

Herman was an irascible flaming queen with a heart of gold. He’d had an out-of-the-body experience in his early-20s while hospitalized with tuberculosis of the bones, and it resulted in a lifelong fixation on the occult. He had a wall-eye and a sort of rolling gait owing to lasting hip damage from the tuberculosis. He tended to growl more than speak. He was a trueyenta, in every sense of the word, right down to the matchmaking. He had a real knack for connecting people. He was the Medici of the occult explosion in NYC in the 1970s. He had no time for the Church Of Satan, he called it “a cheap carnival scam,” but all other groups were welcome to strut their stuff in the back room temple. No form of bigotry was tolerated.

The clientele was astonishing in its diversity. The best customers were the little old voodoo ladies from Harlem, the ones that dropped flyers in the subway offering to remove obstacles and lift curses. He paid me cash off the books, $35 a day. At least once a day, one of those women would come in and drop upwards of a $1000 in cash on herbs, candles, and essential oils. They tipped lavishly, never less than 50 bucks, often more. They were consistently charming. Bedside manner is very important in that line of work.

The next best were the Crowley/Golden Dawn crowd, but they never tipped. They tended to be white, and male. Some wannabe Magus would come strolling in looking for a particular Crowley title, and by the time I got through with him, he’d be at the register with a dozen books, a $15 bottle of AbraMelin oil, a $75 ceremonial sword, a $35 robe, and a $25 plaster statue of Baphomet. It was that easy.

The boundaries of acceptable behavior were as wide as Siberia. We were stoned all day. That back room temple saw more crazy sex than Plato’s Retreat or the Anvil. Herman encouraged us to be rude to anyone who lingered more than 15 minutes without buying something.

The Santeria crowd hated me. I was severely proto-Goth, every item in my wardrobe was black, I wore mirrorshades and knee-high black Chippewa boots, and was openly contemptuous of anything involving animal sacrifice. “You can’t ‘sacrifice’ anything that doesn’t belong to you,” I’d say. “One good well-directed orgasm is more efficient than slaughtering a whole coop of chickens.”

He fired and hired me three times. His appetite for rough trade street hustlers caught up with him in 1992, when AIDS killed him. He left the shop to a few employees who somehow managed to avoid pissing him off. Unfortunately, he also left an accountant’s nightmare. The accounting consisted of several grocery bags of receipts, and he’d neither charged nor paid any sales tax. The shop closed a few years after he died. It was irreplaceable, as was he. It all vanished, like snow on a river.

I met my wife there. She left me right around the time the shop closed. Memory is a funny thing. It’s all about magic and loss. I strive to focus on the magic. Focusing on loss is pointless.