On fallen Jesus, Elfis, and the passage of time. 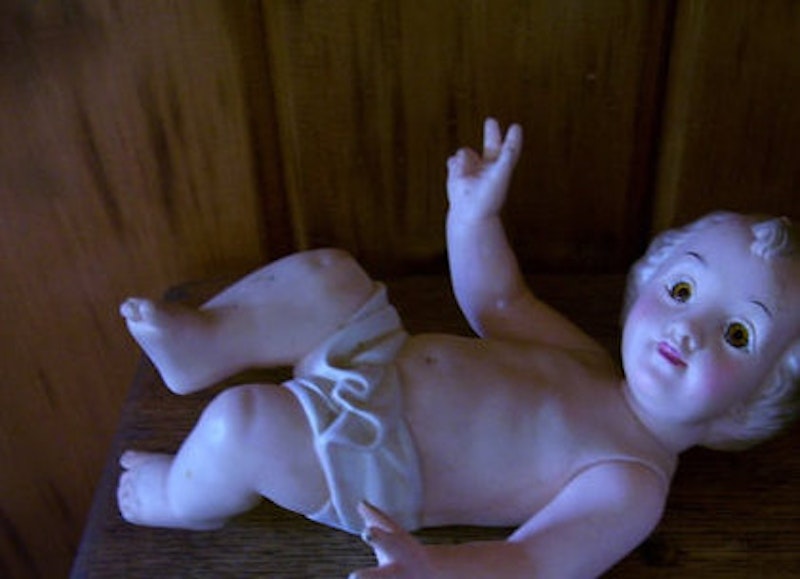 When my daughter was three, she was chosen to be Mary, Mother of Jesus, in the Christmas pageant at the church-based preschool she attended. It was a typical altar manger setup, Charlie-Brown-Christmas style; some kids were shepherds or wise men, animals or the angel. The kids entered in a procession, singing a song, from the back of the church. I remember her walking down the aisle solemnly, cradling her plastic fake baby Jesus with great care, occasionally looking down at him, ever the actress from the start.

The kids reached the altar, spread out into their traditional arrangement; a narrator read the usual “bringing tidings of great joy” stuff. Then, they started up with a rousing version of “Go Tell It on the Mountain.” As a mother with one child (who happened to be the Mother of God at the moment), I was in the front row taking pictures of my daughter in her blue veil and white dress, cradling Jesus like a pro. At one point in the upbeat spiritual song, the kids all started clapping. I watched her. She was torn. No one had told her what to do in the part of the song where she clapped, and her hands were full. She watched the director (her teacher) enthusiastically clapping with eyebrows raised at all the kids: this is when you clap. She made the split decision in an instant.

I wouldn’t say she threw Jesus on the ground, exactly, because that would be an exaggeration. She really didn’t even drop him hard enough that had he been a real child he might have been brain-injured from the fall. She sort of slid him to the ground quickly, slightly jutting her leg out to provide a sort of Son-of-God sliding board; the kind of motion you might use if you were gently dropping a ball to roll across the floor to a nearby puppy. The Lord’s swaddling came undone and behold, the cloths lay on the church floor and a naked plastic baby now lay face down on the hardwood. Polite laughter rippled across the church. Jesus may be the reason for the season, but when it’s time to clap in the song, it’s time to clap in the damn song.

When the song ended, the three-year-old Blessed Virgin Mother casually picked up the cloth and then the plastic Messiah and tucked both under her arm. She arranged him back into the cradling position and resumed her solemn motherly glances down at him as though he hadn’t just been face down on the cold manger floor.

Since that year (this is her 20th Christmas now), I’ve attended more than a hundred school Christmas pageants, choir concerts, plays, band concerts, and classroom holiday parties for my four children. This week, my son/youngest child was an elf in his Christmas school play “Elfis and the Sleigh Riders,” in which a kid wore an Elvis wig and custom-made white cape did an adorable “Thank you very much” impression that I’m sure his mom videotaped and will remember forever. My son never smiled on the stage: he looked like he was concentrating on getting the lyrics and dance moves right—when he entered the auditorium and I smiled and waved at him, he shook his head as though to tell me it was game time and there would be no playing around and waving back.

Prior to the performance, I felt the familiar exasperation: a very crowded gym, how long would this take, when-can-we-get-outta-here feeling. But then I saw a friend in the audience who also has four kids; her #3 girl is in my son’s class. When I caught her eye, I made the shooting motion at my head, universal sign for shoot me, these things are awful.  She whispered, “Last one, though, right?” and smiled.

I didn’t burst into tears openly, but in my mind something clicked. I thought about my middle daughters who’d been a penguin and a seahorse on this same stage in years past. That’s right, I thought, he goes to the older third-fifth grade elementary school next year. This is the last year for one of my kids in the younger school in our town. The last true Christmas pageant. Wow. How’d that happen?

Granted this isn’t truly my last holiday performance ever. My high school marching/symphonic band player and choir member middle daughters ensure years of renditions of live holiday music in the future, and my son will participate with his classroom in holiday concerts at the school across town. But “Elfis and the Sleigh Riders” would be the last time I heard those sweet voices of lispy little kids who have to stand on tippy-toe to reach the microphone, the last time I’d see the homemade felt costumes made by moms, the tinsel-garland background created by the art teacher.

So I sat back, smiled, took pictures of my unsmiling son, and enjoyed the performance with a tear in my eye in awe of how quickly the years go by; it seemed like only yesterday that my little Mary dropped Jesus on his head.