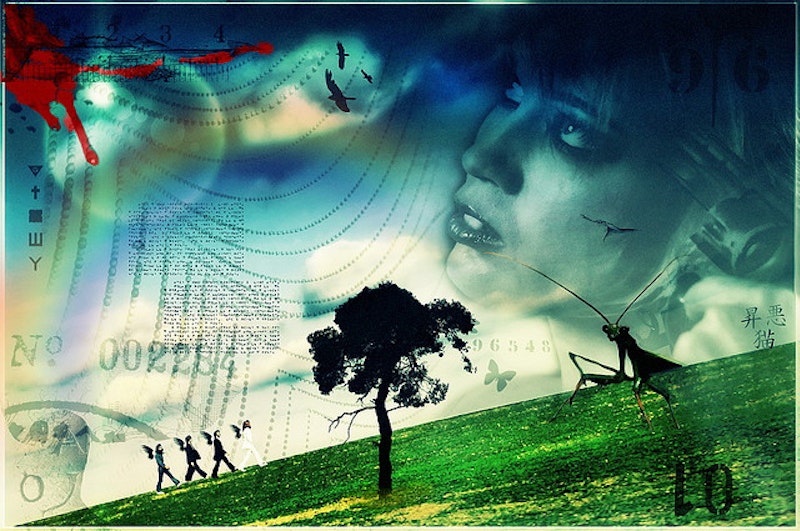 Last week I was laid low, clobbered, by a combination of influenza, bronchitis and a mystery third infection, and in the early morning before receiving medical attention, I spent three hours flopping in bed, alternating between chills and a fever that was around 104 degrees. Slipping in and out of a hallucinatory haze, I’d no idea what time it was, except that it was still dark outside and the birds hadn’t begun their celestial dawn harmonizing.

I wear a nifty Baume & Mercier snap clasp watch—a Christmas or milestone birthday gift from my wife many years ago—and it’s a real treasure, groomed for heirloom status. Only trouble with the watch is this: like an Italian sports car, maintenance is not convenient or cheap. So, when the strap wears out, it takes at least six weeks to replace; a glitch in any other mechanism could result in a back-up timepiece for four months. Currently, if I move my hand a certain way, the watch stops, and on this morning of my haunting reveries it was continually 3:45. At one point, parched, I went downstairs for a jug of water, and it felt as though I’d been hit by a car; my bones all creaky and legs like rubber.

(That’s a rather common description of the flu, but as it happens, back in ’84, on Prince St. in Soho, I was knocked flat on my back by an MTV van, the driver not looking behind him as he accelerated in reverse to leave a parking spot. I was sore for a couple of days—my body that is, although also at the sloppy motorist—and briefly entertained malicious notions about the entirety of Manhattan for the first time in my 29 years as a living, breathing, bronchitis-catching human being.)

A longtime associate of mine—a swell guy to shoot the breeze with about current events, but an unrepentant and wicked asshole when it comes to business transactions—and I had a long discussion about flu-related hallucinations at a bar, Milano’s, on Houston St. in 1988, and we agreed that it wasn’t an entirely unpleasant state. I might add that this fellow, along with his sleazy cousin, got bored one night in that same year, and hiked over to the Lower East Side so they could buy some crack. When I expressed some mild concern—he was an employee—he explained that curiosity had just overwhelmed him, that after a year of reading about and seeing crackheads in New York, as well as soiling shoe leather by stepping on spent vials, he wanted to see what the fuss was about. Not a whole lot, he said, and, that itch quenched, moved on to a new, and healthier, hobby: schvitzing in the local Turkish baths with old Jewish men who reminded him of his grandparents.

I’m meandering, but tough toenails: these are my hallucinations and you can simply stay or go. Oh, forgot: the first time I’d had such a weird series of dreams due to illness (that I can recall) was when I was but five years old, tossing and turning in bed one night, clad in green cowboy pajamas, and I remember standing knee-deep in sand at Brown’s Beach in Huntington, unable to swallow for the excruciating pain. Along came Jesus, dressed in traditional flowing garb, with the hippie-length hair (and since this was 1960, there was no jazz about J.C. being black, female or trans-gendered), and he touched my forehead, stuck two fingers down my mouth and removed a splinter the size of an immense oak tree. Good thing I was a youngster at the time; otherwise I could’ve delivered sermons about the devilish flu from a pulpit. I don’t think I’ve ever had such a vivid or dramatic hallucination—not even during my teen years under the influence of mellow mescaline or Mr. Natural squares of chemical mischief—and it does make the sequence (described below) from last week seem a bit tepid by comparison.

Nevertheless, before I drifted into semi-consciousness, teeth chattering, I was thinking about, of all things, a Nicholas D. Kristof column in The New York Times from March 12. Kristof’s the forgotten Times op-ed anachronism—oh, and can we all join in a joyous hallelujah and say amen! on the recent announcement that Sarah Palinologist Frank Rich is leaving the Times for the less-trafficked but presumably greener, cash-wise, pastures of New York magazine?—and though he jets around the globe generally freeing sex slaves in godawful countries, certainly a noble pursuit, I’m betting even Bob Herbert or Ross Douthat can claim more readers than the earnest Nick. But, shoving along, Kristof wrote a shilly-shallying essay about teachers, pegged, obviously, to the unpleasantness in Wisconsin and Ohio and Michigan over unionized public employees.

Mushy liberal weasel that Kristof is, he claims he’s not a “fan of teachers unions’” and correctly points out that it’s “difficult or impossible to dismiss teachers who are ineffective.” Bulls-eye, old bean, although I’d have been a bit more harsh and called the tenure-protected lot often borderline illiterate. It would follow, then, that Kristof might agree that stripping this particular union of seniority privileges would lead to a higher quality of teachers. But no: the very idea of a union—now, in some cases, rather theoretical and utopian—trumps practical matters, for who among Kristof’s crowd wants to face the ire of Joe Hill?

Nonetheless, there was one quite amazing revelation in his piece, at least to me: in New York City, in 1970, a first-year teacher earned just $2,000 less than his or her freshman counterpart at a “prominent law firm.” Kristof suggests a dramatic pay hike for starting teachers (without addressing the union bugaboo), a move that would attract young and intelligent college graduates, and to compensate for the increased outlay of money, perhaps make classes larger, aping the educational structure in Japan, for example.

That all sounds sensible: pay more, which would remove the profession’s stigma, and award raises based on merit and performance. But, frustratingly, Kristof won’t admit that the teachers’ union has to be neutered to make his scenario plausible.
Anyhow, thinking about teachers trebled my headache, since it not only reminded me about college tuition bills, but also the eighth grade English teacher my younger son was saddled with who jettisoned a class assignment of A Tale of Two Cities because she told her impressionable charges that Dickens was boring and hard to follow. And then turned on Oprah. So, after a fruitless exercise of trying to name the Red Sox pitching rotation of 1986 (in the spirit of the occasion, an exercise in self-flagellation), I drifted off once again into a 5-D netherworld and entered a busted-up and impossibly gaudy Southern county fair where I happened upon an odd pairing of pop music stars. There was Billie Joe Armstrong, listening to advice from the dead-as-a-doornail Gram Parsons, who instead of being preserved in his 26-year-old junkie body had aged as if he’d lived, not unlike Edward Norton at the end of Spike Lee’s vastly underrated 25th Hour.

Billie Joe strummed an acoustic guitar and sang “Mother Mary” to an unimpressed Parsons, who then, even though he was 64, countered with his heartbreaking vocal of “Hickory Wind,” the finest song the Byrds recorded in 1968. I knew, even in the feverish mind game, that this was a reference to the famous Dylan/Donovan footage in Don’t Look Back, but the scene was so vivid, the smell of pine trees so real, it didn’t really matter. When Parsons sang, “It’s a hard way to find out/That trouble is real,” his voice nearly trembling, the whoosh of the cosmic country legend woke me up with a start. I thought of the pop stars who died in that era and figured that Parsons alone might’ve continued making vital music in the succeeding decade. After all, Brian Jones was legally dead two years before drowning in ’69; Janis Joplin and Jimi Hendrix seemed spent by 1970; Jim Morrison, a tub of lard found in a Paris bathtub in ’71, could never match “Strange Days”; and Jim Croce, well, he never got off the phone with that damned operator.

Six days later, the strong antibiotics and codeine-laced cough syrup having largely accomplished this old duffer’s recovery, life at home returned to normal. Last Saturday, one of my sons called out to the rest of the family, “Is everyone else as blown away as me by the awesomeness of the allied airstrikes in Libya? And how cool is it that Sarkozy gave Obama a spare set of balls?”
Had to agree, and was mighty glad this was no hallucination.