I See The Promised Land 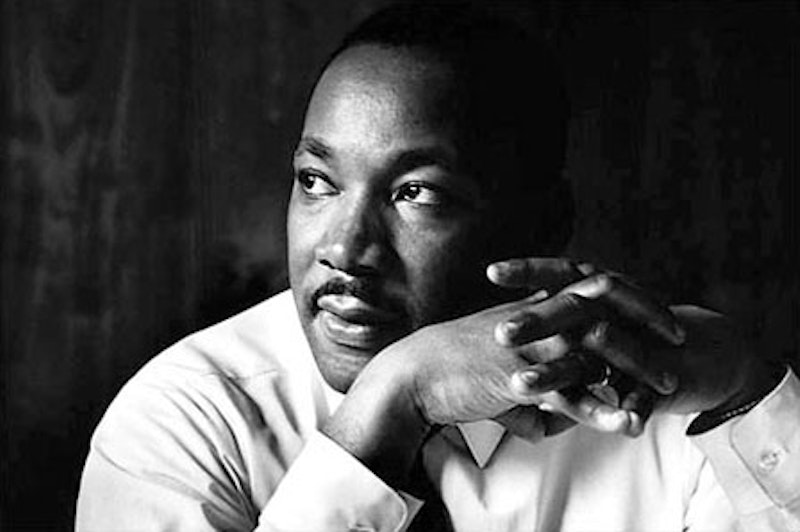 Dr. Martin Luther King Jr. might be the subject of more biographies than any other man, and justifiably so. Amazon returns 1454 results when you search for “Martin Luther King biography”, although one of the top results is the Great African Americans Placemat, apparently written by M. Ruskin (known for his extensively researched placemats, one would assume). So, when you set out to re-re-re-re-re-tell the life of MLK, you need to do something to set it apart. Something more interesting than a dramatic, exclusive, trivial factoid about the peculiar nature of his left big toenail or an interview with a guy who served him coffee once. What’s left to tell?

Author Arthur Flowers, an English professor at Syracuse U, realizes this conundrum, and his solution is a bizarre one. It’s not that he chose to retell MLK’s story in graphic novel form (Amazon results: 18 books, with one on vampire hunting), but that I See the Promised Land is told using traditional Bengali scroll art: a wrenchingly art brut, completely disparate medium to tell the story of a very American movement. The combination of the two is incomprehensible, though the book’s afterword tries to shed light on the synthesis:

“This was the basis of our project: to nudge [the scroll painters’] work into exciting, more contemporary contexts.”

It’s not a biography about King as much as it is an example of scroll painting made weird, but not weird enough. It’s hard to argue that the art is exceptionally beautiful or serves to tell the story with any greater effectiveness than something less “outsider.” When protesters are seen, all with the exact same face, holding up signs written in Bengali, the discontinuity drives itself home. It’s like a bishoujo manga retelling of the presidency of George Washington, or Spider-Man delivered as a musical. Sometimes the medium just doesn’t match the message and acts as a disservice to both. It’s an idea that hovers just far out enough to generate curiosity, and open up the potential for more creative interpretations of known stories, but it just doesn’t reach the impact of the Lego Bible.

This isn’t the only strange choice. Instead of being told in articulate, clear language, the book employs a kind of pidgin English. Flowers considers himself the “heir” to African oral tradition, so perhaps this is his attempt at embracing it in written form. It’s an uncomfortable mélange of language: leaving out articles and messing up verb tenses, and throwing words like “acquiesce” into the mix seems completely unnatural, but I’m willing to accept that it’s a dialect that I’m just not familiar with.

“But by the time setting up come round you owe the man so much for this and that you never get out from under and you totally submissive...”

With the legendary articulation of King at your disposal, telling his story as someone who struggles with the English language seems like another counterintuitive choice, but it’s not an isolated creative decision for someone who also wrote De Mojo Blues: De Quest of Highjohn de Conqueror, according to his bio page on the Syracuse University website.

It’s all a very altruistic, culturally-forward effort, and that’s worth a lot of respect. It attempts to generate awareness of many different traditions, all in the familiar framework of MLK’s struggle for civil rights, but the conglomeration of so many things ends up feeling asphyxiating, and the transmission of actual information is lost in the art of it all. It’s a noble work, but one is left with the feeling that sometimes, tradition shouldn’t be tampered with.