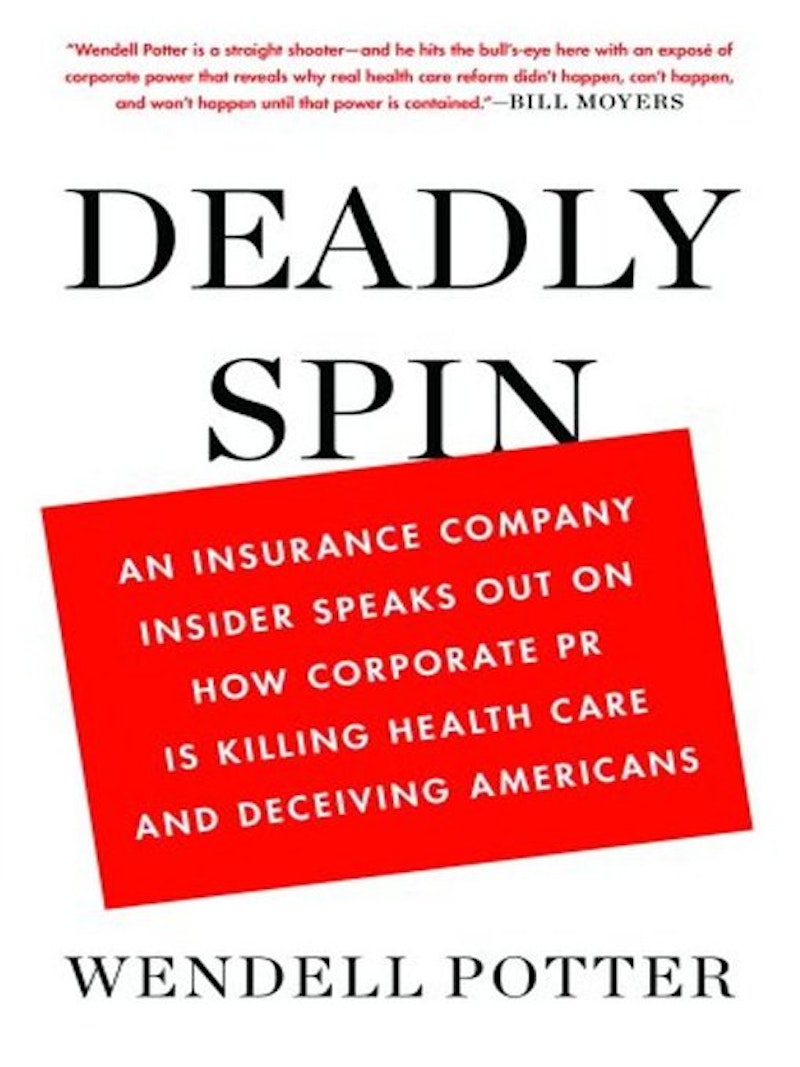 If you want to understand how the corporate system works, read Deadly Spin, by Wendell Potter, a former PR executive for CIGNA turned whistle-blower. As a health insurance insider, he confirms admonitions by Noam Chomsky and Chris Hedges, among others, that corporations spend virtually unlimited sums of money to manipulate the public and shape policy through sinister, subtle lobbying and advertising schemes. Deadly Spin is thorough, well-written and gut-wrenching, walking the reader through “the playbook” of deceitful PR strategies saturating America.

More than an authoritative exposé, Deadly Spin offers a poignant story about self-reflection and repentance. The book opens with some startling facts: “Forty-five thousand people die in America every year because they have no health insurance … the United States ranks 47th in life expectancy at birth, behind Bosnia, and 54th, behind Bangladesh, in ‘fairness,’ a measure of the extent to which the best care is available equally throughout a country.”

Unfortunately, the for-profit health care industry’s corporate PR machine obscures these facts. As Potter explains, America is the only developed country that does not have universal healthcare. But polls show that over 80 percent of Americans consider their coverage good to excellent, and many think we have “the best health care system in the world.” Millions perceive President Obama’s reform as a “government takeover,” as if that were a bad thing, mainly because of “spinmeisters” who work behind-the-scenes and employ psychological techniques to shape our desires and perceptions in ways that most of us probably don’t realize.

Indeed, Potter himself was largely unaware of the harm he was causing while working for the insurance industry for two decades. He would habitually lie to reporters, “but in such subtle ways that I could never even acknowledge to myself that I was purposely trying to mislead. At the time, I was unaware that I was feeding the media and the public false information, and so caught up in the industry’s swirling spin machine that I was oblivious to it.” He was only dimly aware for a reason. Like the rest of us, he was enmeshed in a corporate structure that instructs its subjects not to ask about consequences but instead to focus solely on generating maximum short-term profits.

But as Potter climbed the corporate ladder, he became increasingly disillusioned and discovered that he was a cog in “an evil system built and sustained on greed.” “The health insurance industry today,” he writes, “is dominated by a cartel of large, for-profit corporations. By necessity and by law, the top priority […] is to ‘enhance shareholder value' […] [Y]ou are motivated more by the obligation to meet Wall Street’s relentless profit expectations than by the obligation to meet the medical needs of your policyholders.” Even non-profit institutions are being forced to follow suit, lest they get shut down. This adheres to what Chomsky describes more broadly in Hope and Prospects as “a core doctrine of corporate law,” which holds that “the directors are legally obligated to pursue only material self-interest. They are permitted to do ‘good works,’ but only if that has a favorable impact on image, hence profit and market share.”

This paradigm permeates the entire corporate structure, “from big tobacco to the military industrial complex, and now to health-care,” according to Potter. The rise of modern corporate propaganda can be traced to the early 20th century. Ivy Lee, widely considered the father of modern PR, transformed John D. Rockefeller Jr.’s image from “the biggest criminal of all time” to “the great benefactor of society.” Edward Bernays, another pioneer, molded an entire generation of female smokers on behalf of the American Tobacco Company.

As Chris Hedges explains in Death of the Liberal Class, Woodrow Wilson’s fateful decision to enter World War I revolutionized the corporate system. He created programs such as the Committee for Public Information, popularly known as the Creel Commission, which was the “first modern mass propaganda machine.” It was designed not merely to muster support for the war but to discredit all dissenters by feeding the press pro-war information; even The New York Times joined the campaign to demonize pacifists and “radicals.” So impressive was the effort that Bernays wrote in his 1928 book Propaganda, “It was only natural, after the war ended, that intelligent persons should ask themselves whether it was not possible to apply a similar technique to the problems of peace.” Thus a “new business of manufacturing public opinion” was born.

By the time Potter entered the health insurance world, corporate PR had become so deeply embedded and powerful that it was virtually an unstoppable force. This is why Bill Clinton could not pass his modest reform in the early 1990s. It is also why President Obama had to fight to merely to patch up a dying health care system. Nevertheless, Potter supported the Affordable Care Act because if the insurance industry had killed the bill it would have felt even more emboldened and secure in its grip over Washington and the public. He also feels Obama truly fought the insurance corporations and earnestly wanted radical change via a single-payer program—the whole debate was not a charade orchestrated by an industry that knew beforehand that the White House would obey, in other words.

It’s nearly impossible to know if this benevolent perspective is based in reality, though I’d like to believe it is. In any case, Deadly Spin illustrates in great detail why we will never have an adequate health care system until the for-profit structure is overthrown. It is a monster that devours lives, premium dollars and tax dollars. And it is protected by a PR fortress that can be defeated only by an informed public demanding radical reform.