Or, another typical Manhattan morning. 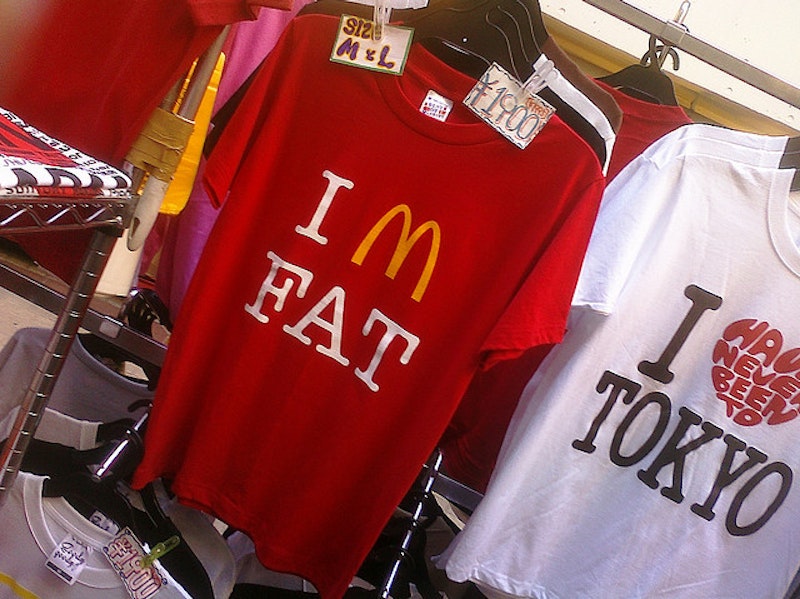 I recently read that a staggering 34.4 percent of American adults are obese.

Other than raising healthcare costs for everyone and knocking my national pride down a notch, I didn’t consider how this statistic affected me on a daily basis. Then, one Wednesday morning on the 2 train in New York City, this happened: I was seated at the end of a row of four bucket seats. The entire row was taken, save for one unoccupied seat in the middle.  At 14th St., an approximately 400 lb. man in a suit and tie got on the train and attempted to squeeze his hundreds of pounds of suited lard into the small vacancy. In doing so, he sat on the woman next to me.

“Excuse me sir,” the startled woman said, “but you’re sitting on me.”

“Then move over!” replied the large man, gruffly.

“Obviously I can’t!” said the woman, palms turned up and looking to me and other passengers for affirmation.

“Alright bitch!” he said, “I’ll stand.” He flung his tie to the side, stood up and grabbed the overhead bar.

“I’m not a bitch,” she contended, “You need to realize your size.”

Just a typical Manhattan morning I suppose, but the incident left me pondering the intersection of the American obesity epidemic and proper public transportation etiquette for hours. How should the obese be regarded on public transportation such as the subway? Many airlines deal with the issue by making obese people purchase extra tickets, http://current.newsweek.com/budgettravel/2009/04/obese_passengers_on_full_unite.html but in the subway, no assigned seating and no present authority figures makes it impossible to impose any such regulation. So, should the obese be categorized with the handicapped, pregnant and elderly? Would the proper etiquette be to give up your seat as you would to a pregnant, elderly or disabled person?

My initial reaction—which I’m sure is the same reaction as most New Yorkers commuting to work—is hell no. It’s your fault for getting that big, now you deal with it. But really, what does it matter whose fault it is that one is in a handicapped condition? Would I not give my seat to someone with a broken leg because he or she stupidly decided to do a ski jump they knew they couldn’t do? No. How would I know whether they did that anyway? Regardless, it wouldn’t change the fact that the person was there at that moment with a broken leg and no seat. By that logic, whether or not a person is obese by their own fault is, at that moment, erroneous.

What are the reasons we give up our seats to the pregnant, elderly and disabled? Because it’s painful for them to stand? Not always, but sometimes. Is it out of respect or pity? Or both? Is it painful for obese people to stand? Should I feel compelled to give up my seat out of pity?

I thought some more about who was to blame and how to handle this situation, and decided finally that ultimately, it was the guy who was at fault and not because of his weight. It doesn’t matter if the guy was obese because he chose to be or because he had a medical condition that’s out of his control. It’s the fact that he got on the train and assumed that he was entitled to special treatment. The guy wasn’t a douchebag because he was overweight, he was a douchebag because he thought his condition entitled him to sit on others or force them to get up. I am sure that if he said, “I’m sorry, hate to be a pain, but would you mind if I sat down?” the woman would have said, “Sure.” I know I would have. Instead, it seems his logic was, “I’m fat, I’m entitled to seats I don’t fit into, and I can treat anyone however I want in order to get my way.” It’s bad enough that this country has the fattest citizens in the world. But citizens who feel their girth entitles them to special treatment and even infringing on the rights of others? That’s just slob-like.

Maybe the issue is manners. Consider this scenario: What if instead of a fat man walking onto the train, it was a little old woman with a cane. What if she didn’t see any open seats and decided she wanted mine. What if she poked me with her cane and said “Get up!” Should I get up? I wouldn’t, and I don’t think anyone in that hypothetical position should. Someone’s unfortunate condition does not give them the right to bully you, and in a population where 34.4 percent essentially have a “handicap” on public transportation and senior citizens are soon to be the largest demographic, this is an important thing for commuters across the land to keep in mind.

Americans are fortunate to live in a country that has the technology, tolerance and common decency to accommodate and appreciate people of various physical circumstances in all sorts of ways. But no one is exempt from manners, and even if you have a special condition or need, you’re not entitled to a sense of entitlement—especially one that involves bullying and belittling others.