Impress friends, woo the opposite sex, and increase self-esteem with these wholly unnecessary vocabulary enhancements! 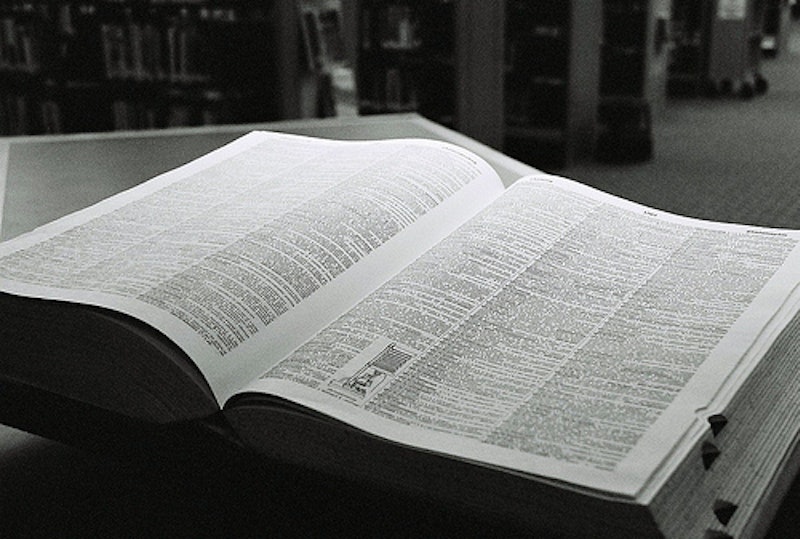 Last year I wrote an article begging the reading public to cease using certain words and phrases. This became something of a hit on Digg.com and also occasioned a huge number of literate to semiliterate responses taking me to task for being a jerk, being wrong, being a wrong jerk, and being wrong about the word "data," which I said should be used as a singular noun rather than plural. (I also said that neither usage was grammatically incorrect, a nicety that many of my detractors did not absorb.)

To my ear using data as a plural noun ("the data show that...") suggests insecurity and the desire to identify oneself with extremely precise and technical people; it is of the same spirit as referring to an emergency room as an ED ("Emergency Department"), and it represents the same basically pitiable desire to demonstrate exclusivity and expertise through tossing off phrases that, though technical, are only very slightly obscure. Choosing unusual jargon instead of clear, common English words veils one's purpose and forces additional effort on one's listener. Why would anyone desire this, or feel that it somehow exalts the speaker?

I suppose that this attitude is inconsistent, since one of the greatest joys in my life is writing articles on ephemeral topics in which I use needlessly complicated words that I have had to look up on more than one occasion. One might even call it hypocritical; but you shall enjoy the fruits of this hypocrisy as you consume the following list of ridiculous words, some very rare, some commonplace, but all useful for the discerning fop, sybarite, jongleur, raconteur, pettifogger, didact, or popinjay.

Insouciant - adj. Careless, with a connotation of childlike indifference to consequence. Its noun form, insouciance, trips off the tongue even more readily than its already melodious adjectival version.
Examples: "Did you not see before you all of those pies that you ruined? I find your insouciance incredible!"

Nonplussed - adj. Extremely surprised. Within a few years this word will "officially" mean cool and indifferent, since its "non" prefix seems to confuse everyone into thinking it means the opposite of its formal definition. It is vain and rash for me to wish that people might take up the word in its correct usage and fling it in the face of those who have not gone to the trouble of looking it up, frowning, and saying "Oh, huh!" Yet the Internet is, if nothing else, a stage on which the vain and rash desires of people who know how to type may strut and play for an audience of at least dozens, so here we are.
Examples: "I was nonplussed by your insouciance!" "The explosion left the members of the fountain pen appreciation club nonplussed."

Disingenuous - adj. In the Oxford English Dictionary's words, "insincere, morally fraudulent." Not an especially rare word, but an indispensable one. I find myself saying disingenuous frequently, perhaps constantly, as I read the opinions of various pundits. Picture me in front of the computer, as I croon "disingenuous, disingenuous, disingenuous." If you plan to consume any political reporting or turn on a television you should probably arm yourself with this word. See: Orly Taitz, Pat Buchanan, almost every single argument propounded by Jonah Goldberg, Bill Maher, Arianna Huffington's environmentalism, etc.
Examples: "Boy was that ever disingenuous!" "Spare me your disingenuous insouciance! I know that you introduced that unpleasant paste into those pies, we have surveillance camera footage!"

Snuggery - n. A small, snug, comfortable room, perhaps where, if you were a mouse or gnome, you might sip tea from an acorn-top or recline on a marshmallow. The word borders on twee, but I believe it produces a delightful effect when shouted in exhortation.
Example: "Let's all retire to the snuggery to drink Zima and eat individually wrapped cheese slices!"

Quincunx - n. a pattern like the face of a die with five pips, that is, four corners of a square and the center. Actually I am just kidding; no one should ever use this word.

Catafalque and special bonus cataphract - n. and n. It appears that these words, though similar-sounding, are not etymologically related, but let's not let that stop us! A catafalque is an open hearse, usually reserved for state funerals (it can also mean a platform used to display a very important dead person). A cataphract is a suit of very heavy mail armor, and metonymically a very heavily armored horseman. One must struggle to drop these terms casually in conversation, but I assure you that it can be done.
Examples: "Oh, that? It's just a picture of a cataphract that I left lying on my coffee table, which was originally a catafalque. Can I get you another Zima?" "I can't believe that you stayed so insouciant after those cataphracts rammed into the catafalque!"

Catachresis and Solecism - n. and n. If you should ever need to make the people around you certain that you are a condescending asshole, you may employ these terms, which are close to one another in meaning but not synonyms. Catachresis is the misuse of a word, while solecism has a broader meaning, indicating a lapse in grammar, usage or etiquette. Thus a catachresis is a solecism, but a solecism is not necessarily a catachresis. Solecism derives from the ancient Greek city Soloi, which was apparently inhabited by ancient Greek hillbillies.
Example: "Pronouncing ‘insouciant' ‘in swee sant' is a solecism, but falls far short of catachresis."

Louche - adj. From French, this word has gained currency among people who might know the names of Danish designers or would at least like people to think that they might know the names of Danish designers. It means sleazy or seedy and can apply to people and places equally. Ideally you should use it to refer to places that are not really in the least sleazy by global standards, as in "Well the restaurant is a little louche but the braised rabbit and Greek olive medley was okay, and Yves really enjoyed his steak au poivre."

Harridan - n. An obnoxious woman (see also: termagant, virago), with connotations of age and impressive physical power (not necessarily weight, but a certain rawboned, ropy strength). There are few comparable terms for men, although capon and martinet come close.
Examples: "Your insouciance will not get you past Mr. van Houten's secretary; she is a harridan and generally intractable." "Get a load of that harridan!"

Incunabula - n. From the Latin for "cradle," this word refers specifically to printed texts predating the year 1501, and more generally to examples of something still in its infancy, although one practically never hears it in reference to contemporary technology ("Oh yes, those dot-matrix printers are the incunabula of the desktop publishing boom") or, in fact, to anything else. I really can't recommend using or knowing this word; if you have absorbed the definition I encourage you (to the precise extent necessary to avoid exposure to legal action) to hit yourself on the head until you forget it.