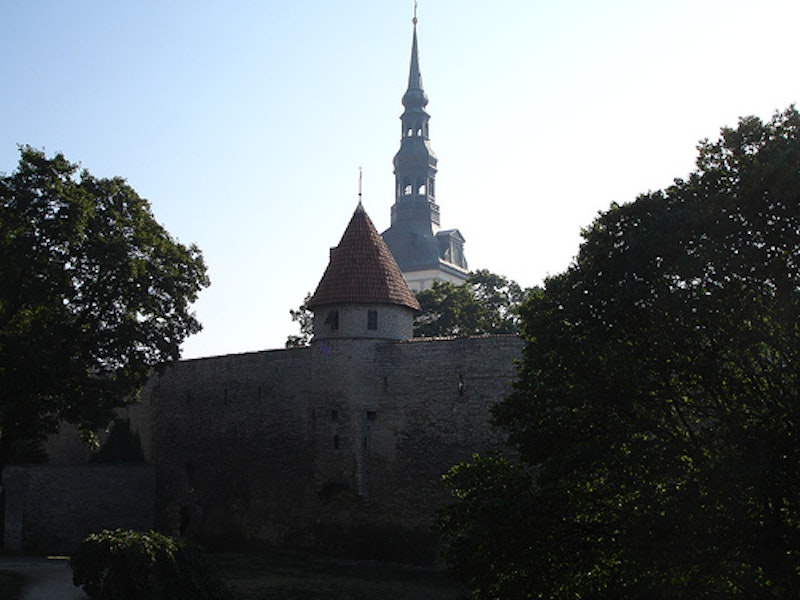 While passing time early one afternoon in an Amsterdam coffeeshop, I struck up a conversation with a young Australian, in the fashion one does when traveling alone and heavily narcotized. He told me he was at the end of his trip, that he had been traveling for a few weeks. I asked him to inform me of his previous destinations and he responded in a slow, stoned Tasmanian drawl, "Pretty much everywhere. Spain, France, Germany. Pretty much everywhere." I kept silent, in no state to quibble with his geography even had etiquette allowed for it, but I couldn't help silently remarking that my newfound Aussie companion was working off a damn small map.

But then all of us set different diameters for our atlases, extending or compressing, shading out the borders and scrawling "here there be dragons" in the margins, a fact which two days spent at the Uus Maailmin in Tallinn, Estonia set off to me in vivid detail. A decaying mansion in a semi-constant state of renovation just southwest of the old city, the Uus Maailm operates as a communal living space, offering shelter and board to comers of all nationalities, ages and descriptions. A dozen-odd quasi-permanent inhabitants reside in a warren of back rooms set above an irregularly furnished kitchen and living area. Those travellers who manage to find a spot sleep in the attic, a cavernous structure papered with old concert posters and spray-painted slogans, half-inch cracks in the rotting wooden walls leaking in the chill Baltic air on the 10 to 20 wanderers calling it home on any given evening. Dinner is served at seven, an improvised affair prepared by anyone interested in making the attempt and open to all in exchange for a modest contribution to the house's coffers. The fridge is well-stocked with a selection of local beers, again available for an at-cost donation.

The residents of the Uus Maalim, both constant and temoporary, are the sort of people that make my limited ramblings—six months in the far east and a scattershot selection of western nations—seem nothing more adventurous than a quiet walk to the corner store. Couch surfers, train hoppers and veteran hitchhikers, real new-school Neal Cassady types, who casually toss out stories of slipping the border between Egypt and the Sudan, of nights spent in the unfriendly company of Siberian border guards and the best places to squat in Samarkand. The wild-haired British man blowing a jazz clarinet in the corner spent six months rambling through Turkey, breathing fire as part of a travelling circus. The 60-ish Finn taking up the sleeping bag next to mine is trying to set up a self-healing center in Helsinki, and insists he once cured an Indian epilectic through the time-honored (although scientifically condemned) practice of trepanning, his holy-fool eyes bright above a two-foot long beard that forks off into a half-dozen dreadlocks at the end. The one other American in the place regales me with stories of his year and a half on the road as he mends the collar of his shirt with dental floss. These are folk for whom the map is very wide, who have gripped the corners of it with both hands and stretched it like a child with a sheet of silly putty.

All of these urban nomads share a selection of abilities and attitudes that mark them as distinctly outside the flow of their sedentary neighbors. Their skills—the best way to thumb a ride, how to identify buildings that might offer shelter for the night, scavenging and foraging for foot, how to knit, properly pack a bag, fast talk a customs official etc.—don't seem hard to master, given the appropriate effort. It's their demeanor one suspects would be more difficult to adopt.

Foremost amongst these dispositions is an understanding of time and hygiene which knows no counterpart amongst settled peoples. The single shower in the house gets frequent use, split though it is between the bodies of 20-30 inhabitants, but all these people display a willingness to forgo those comforts which the rest of us take for granted. Warm floors and hot water, fresh sheets and clean plates—none of these are absolutely crucial to the continued survival of the race, but all are part of the daily joys that make up for eight hours in a cubicle. The hardened wanderer cares little for these comforts, seems to recognize only vaguely that they have abjured what the rest of the world counts as integral to their existence. They scorn the comforts of the domesticated as their bare feet grow calloused and their hide thick against the cold.

The second forbearance, all the more pivotal to the average citizen, is a rejection of the constant and disciplined interest in the passing of time. Hundreds of hours spent waiting by the side of the road for a friendly motorist to pass has given them a quiet contempt for the slavish fascination with the ticking of the clock common to the rest of us. They'll get to Slovenia, but that's as far as they're willing to allow. Whether they hit Ljubljana Wednesday afternoon or Saturday morning is of no great account. For the rest of us, our lives ruled by hourly deadlines, the 48-hour period between Friday and Sunday evenings the closest we have to freedom, this is a perspective almost impossible to fathom, let alone share. My few weeks traveling have done nothing to shake it, hurrying to the bus station in the early morning, frantically checking the clock on my iPod in anticipation of my upcoming journey.

For the hardened traveler, the road itself long ago eclipsed any particular locale as their primary source of excitement. The joy of the average tourist, arriving somewhere previously unforeseen, is one that they are no longer able to experience. Ask a rambler to describe a particular city, to recount a destination, and their noses crinkle up with confusion, minds working hard to distinguish one half-remembered cityscape from another, Riga from Paris, Cairo from Cardif. "It was okay." But ask for details on the best hitching spots between Belorus and Romania, or how to dumpster-dive in Amsterdam and their eyes light up wondrously, and a steady stream of suggestions and anecdotes runs forth from their smiling mouths.

The folk drifting through the Uus Maalim are not incompetents. By and large they seem intelligent, and even talented. One holds a Master's in architecture, another a B.S. in engineering. Several are software programmers, picking up freelance work when they need to make a few dollars to get to the next town. Even those without a clearly marketable skill set have a certain jack-of-all-trades industriousness, installing toilets and fabricating furniture. Turning their back on mainstream life is a choice made freely, not one thrust upon them by a society whose standards they were unable to meet. These are dropouts, not burnouts.

Could I be like them, I wonder? Jump the fence that separates the great mass of humanity from the few that think it best to cut their root system and move about unfettered? Already I have come to adopt some of their mannerisms. When I arrive in city in the early morning, I tend to only have a vague idea of where I'll be spending the night, hoping the friend of the man I met in Stockholm will make good on his asssociate's promise to put me up for a few evenings. Necessity often demands an interruption in my formerly constant self-cleaning routine, although I find it uncomfortable and often discreetly sniff my scent in metro bathrooms, wondering if my odor has progressed from manly to offensive. Is the distinction between myself and the true wanderers fundamental, or am I already in the process of conversion? If I extended my trip a few more months, would that be enough to earn me the glass-eyed stare of the inveterate searcher?

Something suggests to me that it would not, that some intrinsic property of my being renders my ever joining their ranks impossible, that my brief journeys are an interruption of a buttondown lifestyle. A love of leisure, a want of courage, a preference for a comfortable bed over the gravel of the road, who knows? But some gulf separates us, and I think it's unlikely I'll ever be adopted into the fraternity of itinerants that includes so many of my companions in the Uus Maalim attic.

In the end I'm not much different then my Tasmanian acquaintance. We both wade as deep into the river as inclination allows, dipping our toes in the foam or wading in up to our collarbone, and having reached our limit declare the depths plummed, and that anyone heading deeper or staying longer is a madman and a fool.

Still, buoyed by my contact with the people at Uus Maalim I resolved to skip the cost of a bus ticket on the next leg of my journey and see if I couldn't hitch a ride with some magnanimous coachmen. After 30 minutes on a highway leading from the outskirts of Tallinn, with the sky growing dark and my pack weighing heavy on my shoulders I started to think about packing it up, throwing in the towel on this whole absurd experiment. As I stood debating my prospects, a blue compact left the long line of apathetic commuters and pulled off onto the dirt shoulder.

"Where you heading?" The driver asked.

I put my bag in the back and climbed into the passenger seat.

"You traveling?" He asked, accelerating forward.