Back is a haunting later work by Henry Green, one of English literature’s great forgotten talents. 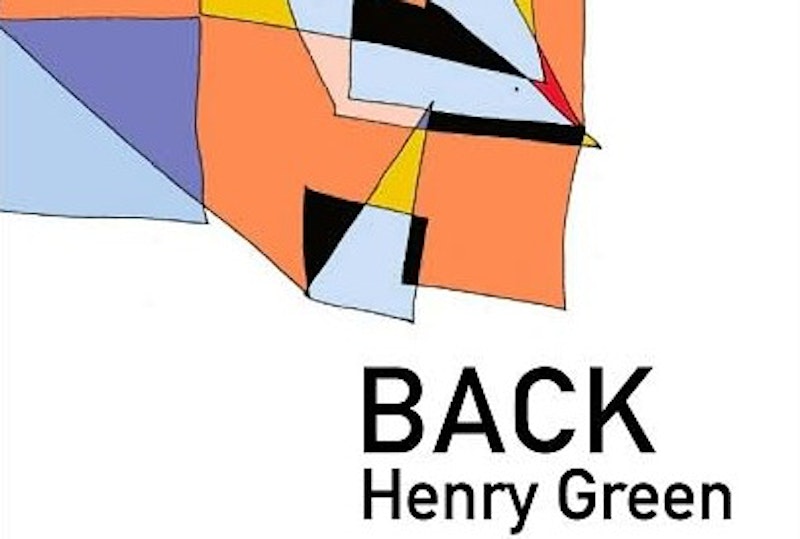 Though different in tone and topic from his earlier, relatively better-known books, Back, originally published in 1946 and newly reissued this month by Dalkey Archive, is in many ways an ideal introduction to Henry Green’s work. By largely jettisoning his preoccupation with class differences and sharpening his oblique prose into a more immediate narrative voice, Green was rarely this accessible. Back concerns a disabled British World War II veteran’s first months home after internment in a German P.O.W. camp. It is simultaneously an intimate character study, a sensitive reflection on the war’s rippling societal effects, and a worthy introduction to one of the most underappreciated English writers of the 20th century.

Green, born Henry York, was a late Modernist both in circumstance (he published his nine novels and a memoir between 1926 and 1952) and style—his multi-character books flit from high society to servant classes, with a cinematic flexibility and expressionist language that recall Joyce. In Living, his second novel from 1931, for instance, the contrasting worlds of a Birmingham foundry’s employees and owners are differentiated by the language used to describe them; beyond the Dickensian working-class vernacular, the very prose in Green’s blue collar sections is gruffer, with fewer adjectives and less punctuation than the relatively flowery descriptions the wealthy ruling class. Language is mutable and strange in this book, as well as in his 1945 masterpiece Loving, about the residents and servants an Irish castle during World War II; Green could be a master of flowing, observant imagery, but more often he lets the comma-less rhythms of speech and observation flow over his reader, not unlike Faulkner.

Green differed from his modernist contemporaries, however, in his relatively joyful conception of the world. Love triumphs in his short novels—not without struggle, distractions, and cynicism, but eventually nevertheless. He never explicitly played with stream-of-consciousness in the Modernist vogue, and instead allowed the collective energies of his scenes and settings to express individual characters’ virtues, like the Renoir of The Rules of the Game or the Altman of Nashville and A Wedding. Even more so than Joyce, who helped bring the first movie theater to Dublin before his writing career accelerated, Green’s books feel overtly cinematic, particularly Loving, which is almost entirely free of internal monologues and narrative omniscience. Instead we have sentences like “Charley appeared to find it suggestive because he whistled,” which place us at an odd remove from the characters in question. Our ears perk up at a sentence like this; in fiction, we often expect to be told how a person feels about their surroundings, or what conclusions they draw. Instead Green leaves us with pure observation, a circumstance that arguably recreates the actual experience of living better than typical fictional omniscience. Hence his novels’ titles—Loving, Living, Doting, Party Going, Concluding—which imply ongoing motion rather than finality.

Back, as its title makes clear, is more about the past than the teeming present, and it concerns one man where Green’s earlier books often drew their power from the collective experiences of large groups. Charley Summers is the English soldier whose immediately post-war reentry into society gives Back its title and plot. He’s also still obsessed with Rose, an old childhood friend with whom he had a passionate affair right before the war, and who died while he was away. Each chapter is built around a different conversation that Charley has with people who were directly or indirectly related to Rose: her suffering parents; Rose’s widower, whose son Charley surmises might actually be his; her doppelganger half-sister Nancy; and Middlewitch, who was in the same wartime hospital as Charley and who distracts himself from typical ex-soldier anxieties by chasing every woman he sees.

The characters slowly come together in a small web of relationships and romance, yet the focus remains steadfastly on Charley. He observes how each person is somehow haunted by a lie or a transgression in their past, until his own PTSD troubles seem relatively straightforward in comparison, at least to us. The rampant observation and dialect-filled speech of Green’s wilder books has been dialed back, making this relatively straightforward book—set in pubs and quiet drawing rooms—feel even more stereotypically English than his others. The slightly austere tone and subject matter in fact feels more like Ian McEwan than anything else from Green’s modernist contemporaries and his more Beckett-like experimental period.

As a portrait of one man’s experience, Back is a quiet, beautiful book that ends, despite the interpersonal chaos throughout, on a gently optimistic note typical of Green’s work. Charley’s obsession with Rose and the drizzly English setting recall Graham Green’s The End of the Affair, another wartime story of guilt and misunderstanding. But I was even more reminded of a book that bears no stylistic or moral resemblance to Back: George Simenon’s Belgium-set noir nightmare Dirty Snow. Green’s cautious optimism and perennial belief in love couldn’t be farther from Simenon’s unbelievably bleak novel about a whorehouse during the German occupation, but both novels, despite their plots and the complete absence of battle scenes or politics, are books about war. Every plot point and in both novels is entirely reflective of wartime societal unease, something that Green perhaps addresses even more explicitly when he indulges longer descriptions:

It rained all the August holiday. The Philips’ home in which Charley had last known Rose, was on a main road just off the village street. Convoys of American army trucks shook the old house, the whole day. Often Dot had to yell to make herself heard. The three of them even had difficulty in getting across to the pub opposite, where darts, at times, were shaken off the pig bristle board.

Here we see Green’s concerns made manifest: the war encroaching upon and dismantling typical signs of English society. It’s an observation that other writers, particularly those after World War I, have made before, but by cloaking his social concerns in the story of one minor soldier’s personal suffering, Green’s point is more haunting than it might be otherwise. We see through Back’s construction how war seeps into even the tiniest cracks of society and individual experience.