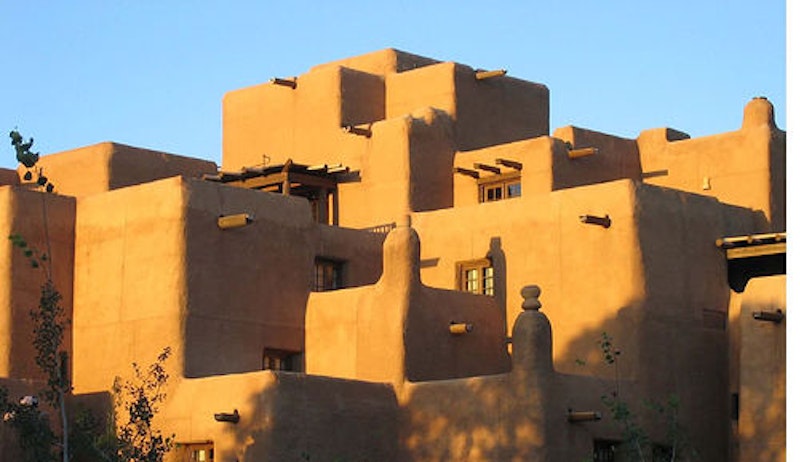 Santa Fe! Lovecraft called it the City of Ten Thousand Pillars. Borges visited and pronounced it “A++++ GREAT CITY WOULD VISIT AGAIN!” Bob Dylan immortalized it with the classic lines “Santa fe/doo doo doo doo doo Santa Fe.” Accessible by an apparently secret airport, a train which runs perhaps three times a day, and by some shuttles with non-trust-inspiring names, Santa Fe has many things to offer a visitor, although on closer inspection these many things are merely idiotic variations on one basic theme.

The People
The people of Santa Fe are a poorly dressed and indolent breed. They possess an artless directness that a visitor from crueler climes might mistake for rudeness; it is in fact nothing more terrible than an ignorance of the dissimulation of faster-speaking and thinking people. If you ask them, for instance, if their breakfast restaurant is open at 10:30 a.m, they will tell you simply “no,” and they will go about their business. A New Yorker, conversely, would either furnish you with blandishments and false apologies or go directly to invective. For a person from the Northeast this behavior is intolerably confusing, as is the glacial pace of the Santa Fean gate and the population's fondness for smiling at strangers in the street.

The City
Santa Fe consists of rounded adobe structures whose fresh innocence and obvious newness suggest the excretions of some monumental mollusk rather than the purposeful art of a mason. The buildings are graceful and their makers furnished them with many redundant loggia, portals and arcades—these provide shade where the weary traveler may rest for a moment and consult his guide to the city (in truth a glossy and attractively laid-out directory of boot stores). On the horizon the region's famous mesas rise; the traveler may gaze as long as he likes on their distant fastness because traffic moves so slowly that even if one were to step insensibly into the road one could scarcely receive anything more fatal than a gentle kiss from the dangling bumper of a 1970s Buick Skylark. The area's fine weather has engendered a blurred distinction between indoor and outdoor spaces. One may step into a dusty courtyard and find oneself in a mall; one may ascend an outdoor staircase and find oneself in another mall, or perhaps the same mall. The city has many malls.

Industry
Santa Fe relies completely on the sale of cowboy boots, tacky jewelry, native handicrafts (blankets and pottery), and tasteless “fine art.” The region's generous governmental patronage allows the municipality to support three art galleries for each permanent resident. The least expensive boots available are $250; many cost as much as $3000, enough to buy a local family several derivative O'Keefe-style watercolors. The shopkeepers generally stock nearly indistinguishable merchandise—one can walk from one end of the town to the other and see repeated in each window the same pastel and turquoise and silver, monotony enlivened only by the periodic intrusion of Japanese restaurants. Competition among vendors is very fierce, and they respond to the vicious business climate by leaving their stores inexplicably during the middle of the day, opening very late and closing by dusk, if not earlier. Santa Fe, despite its reputation for costly goods, is an excellent destination for budget shoppers because most of the time it is impossible to buy anything at all.

Food
The city offers many options to the discerning diner, but only before 7:30 p.m. Afterwards one may choose between the genuinely delightful Atomic Cafe and a tavern whose owner, despite the fact that I had just walked past a row of picture windows that disclosed a nearly empty interior, told me that the restaurant was full and that I could not dine there unless I were joining a party already seated. The Atomic Cafe served an excellent grilled pineapple and pork sandwich and employed a very tall emo waiter who addressed me with all the shy deference of a Japanese maiden in a British stage play. Everything in Santa Fe will come with chipotle sauce, which is excellent if you like the taste of burning cardboard and only middling if you don't.

Lodging
I stayed in the Hotel Saint Francis, a stately place with whimsically decorated rooms and a desk staff who carried the city's tradition of docile incompetence to a masterly conclusion. The desk clerk when I checked in was extremely charming and indulgent but he treated certain deficiencies in the hotel's service as an untutored savage might regard the disasters of nature or a solar eclipse. The hotel suffers under disfiguring renovations that have closed its restaurants and its room service. The construction requires honest-to-god jackhammering, a sound that long residence in Princeton's constantly evolving dormitories has made as sweet as a lullaby to me. My room's windows opened on an alley filled with construction debris and a curiously intact toilet; one of the construction workers must have shared my feeling that the scene was not without a kind of rugged beauty. He consequently spent his lunch break sitting in the alley and discussing his various medical ailments on his cellular phone. I imagine that in more tranquil periods the hotel would be adorable.


Santa Fe’s endless rows of shuttered shops recall the early days of 3-D video games, when a city street's enclosing buildings were like walls with painted doors that would never open. The city’s indifference to visitors implies a suffering and sadness beneath its impassive face. If the city could speak I would hope it would adopt the voice of Tennyson:

The woods decay, the woods decay and fall,
The vapours weep their burthen to the ground,
Man comes and tills the field and lies beneath,
And after many a summer dies the swan.
Me only cruel immortality
Consumes; I wither slowly in thine arms,
Here at the quiet limit of the world,
A white-hair'd shadow roaming like a dream