The Scarlet Library's reissues of classic erotica are the perfect summer reading for anyone who gets off on good grammar. 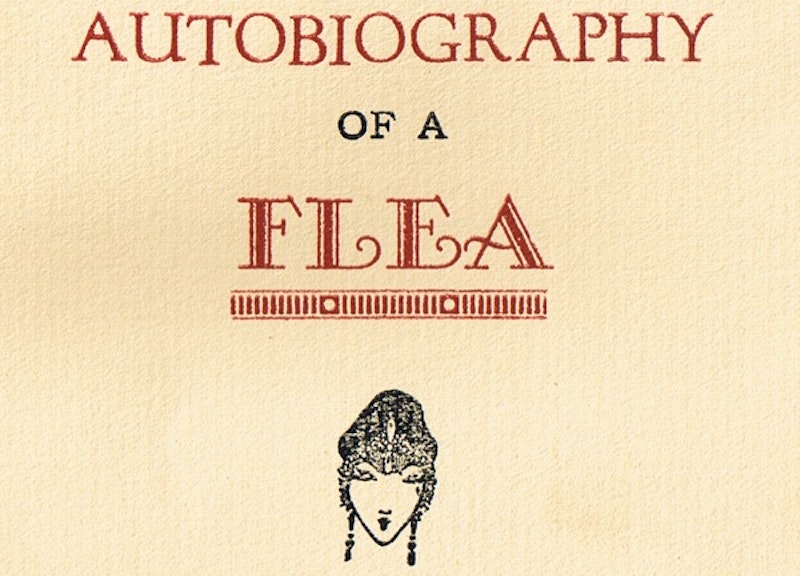 In his Confessions, Jean-Jacques Rousseau refers to certain books that are meant to be read with only one hand. Presumably, he was referring to pornography. I just finished reading Two Flappers in Paris, another page-turner by my favorite author, the excellent and prolific Anonymous. Anonymous is also the genius behind, Maudie and Autobiography of a Flea—two books I once owned, but which have since disappeared from my shelves, stolen, I imagine, by one of my vagabond friends at one of my vagabond parties, which is why I was so excited to come upon a whole table full of similar titles recently, discounted at Strand. Reissued by The Scarlet Library, these and other pornographic classics come bound in black cloth and decorated with a discreet red dust jacket, making them ideal for reading on subways and in public parks.

I perused Strand’s selection for nearly an hour before I decided on Two Flappers in Paris, paid, grabbed a handful of free bookmarks, and scuttled off in the direction of my apartment to give to Anonymous my fullest attention.

Maudie, a classic tale of Victorian erotica, begins typically with a gentleman waking up after a long night of drinking in a mysterious maison to the touch of an oversexed chambermaid, who immediately begins attending him. The Autobiography of a Flea, on the other hand, is quite a bit more modern and takes for its point of view the artful narration of a flea, who for a brief period of time lives in the pubic hair of a 14-year-old nymph. Over the course of the book the flea describes her subsequent rape by her father, her uncle, and her local man-of-the-cloth until, by novel’s end, she is as morally corrupt as her aggressors. My most recent acquisition, Two Flappers in Paris, begins with a device standard in Edwardian erotica; a narrator introduces himself to the reader, while also retaining his anonymity. “Without in any way disclosing my identity—which, indeed, would be of no special interest to the reader—I may say that I occupy a somewhat important position in our Diplomatic Service, and it was in this capacity that I had to visit Paris in the month of 19__.”

All three books are written in impeccable English, which is why they appeal to me. What grammar! What punctuation! The whole of Two Flappers is written with seemingly effortless grammatical rigor, which is a sweet relief from the great majority of contemporary novels of any subject heaped to the bindings with clumsy, error-riddled prose.

In reading Two Flappers in Paris, however, for a few moments I am shielded from further linguistic corruption and the debased feeling brought on by poor syntax and gross misuses of the copula. Anonymous relates his tales with charming precision. Rest your eyes on this immaculate bit of description from Chapter Five, “The Whipping Room:”

What painter, were he at the very top of his profession, could produce that delightful fruit of pink and white flesh, so attractive and so delicate in its development? But even if he did succeed in this task he would only have produced an incomplete work, infinitely inferior to the reality: there would be wanting the life, manifesting itself in those quiverings and tremblings the mere sight of which intoxicate one. There would be wanting above all that imponderable thing, the feeling of seeing, of admiring, a virgin’s bottom, a bottom pure and fresh, absolutely chaste and never yet soiled by the slightest touch. I gazed upon it with an almost religious emotion, with which was mingled, let it be said, no slight admixture of hot desire.

I did not dare to ask Rose to allow me to whip the delightful treasure, but at that moment I made up my mind to use my utmost endeavor to be able to do so at sometime or other; whether my hopes were ever to be realized—this, as Rudyard Kipling would say, ‘is another story’.


Two Flappers in Paris is a delightful yarn about a distinguished English gentleman of middle age with respectable moustaches who, in the first chapter, on deck crossing the English Channel, meets a sweet young girl on leave from boarding school. The two get to talking, our gentleman politely quizzes the girl about her studies and life at the school, and it’s not long before she tells him, quite innocently, how she envies the senior girls, for they know so much more than the underclassman and get to be part of a secret society called “The Lesbian Society.”

By the time the boat docks and this introductory chapter closes, our gentleman has rather benevolently offered to well-educate the girl so that upon returning to school she might impress all her friends with her newfound knowledge and gain acceptance into the society. Chapter Two, entitled “A High-Class Maison Close” has our gentleman picking up the young lady and her best friend from boarding school by posing as her Uncle and bringing them to a brothel where he is “received with open arms,” for he is a regular. Here, he will commence with their education and takes the Madame aside to arrange their afternoon.

“My dear lady,” I said, “I have had the most extraordinary piece of good fortune. I have made the acquaintance of two young maidens, two little flappers who are absolutely fresh and innocent, and I have promised to bring them to your house and to let them see some of your interesting cinema films.” At first she raised loud objections for the adventure seemed to her altogether too risky, but after further discussion, and influenced no doubt by the liberal terms I offered, she began to change her tone and finally agreed to assist in the carrying out of my plan, laying down, however, one condition as indispensable—that the maidenheads of the young ladies should not be tampered with. This she considered necessary in view of possible subsequent troubles; as for anything else, to use her own strong expression, “elle s’en battait l’oeil,” which being interpreted means that she didn’t care a fig.

In addition to its tasteful cloth binding, each Scarlet library edition boasts color illustrations by a different living artist. Two Flappers in Paris features lovely illustrations of gilded spanking scenes by the talented Sophie Alexander and a few charming busts of our gentleman and his moustaches sprinkled throughout the text. It is this careful attention to detail both in the packaging and in the writing that makes these volumes truly something that a collector can be proud of. No more stashing your porn at the bottom of your sock drawer or beneath your bed. The Scarlet Library publishes truly top shelf stuff, and what a relief it is to be able to show off one’s collection. Finally, a book with which one can jerk off in public and not feel ashamed!