Sighing every time the sun came out

Thoughts on The Blizzard of '93. 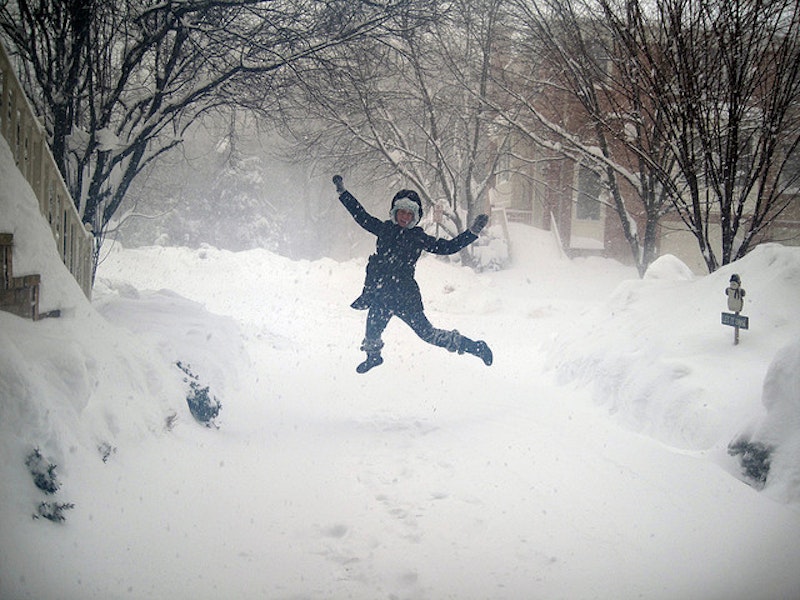 I grew up in a North Carolina town with 3,500 residents, a Hot Spot gas station and a Mexican restaurant with constantly rotating names and owners. Even though winters in the mountains see far more snow than we do in the more temperate region I live in now, people are equally unable to cope with it there. The power goes out with the slightest snowfall. Schools are closed with a dusting of snow as torrential as dandelion petals. The roads don’t get plowed because there aren’t any plows. The one grocery store in town sells out of eggs and bread and American cheese in the mad rush for supplies, as though running out of Diet Coke will lead to a wintery death.

There was one storm, however, that justified our generally over-zealous reactions. The Blizzard of ‘93, known locally as the Storm of the Century, was huge, actually huge, and not just because I was short and could jump into snowdrifts and disappear. It stretched from Central America to Canada, and in places where it’s more likely for popcorn to fall from the sky than snow, people wrapped their hands in newspaper and learned to shape snowballs. The Florida Panhandle got four inches, Birmingham got 12, and my hometown got four-and-half feet. School was closed for so long that we forgot everything we had learned and had to start from the beginning, singing the alphabet and counting on our fingers. The weight of the snow broke trees and downed power lines. We lost water, power, and heat. A neighbor’s house had a wood-burning stove, so my family stayed with them for several days. It was their family of four, my family of five, and our various pets, including a couple of dogs and my brother’s boa constrictor, Sam, who stayed under the heater in a cotton pillow case with the neck knotted shut.

We lived on a hill about a half-mile long. It’s steep—a pain to walk up even when you’re not up to your knees in snow—and really, really fun to sled down. We started from the top, often two or three kids on the plastic sleds cracked from abuse, and sped down, hitting ramps manufactured out of plywood and covered by a compact layer of snow by older kids. We flew off the ramps for a brief second, hitting the ground with a jarring thump, and then walking 20 minutes up the hill and doing it again.

There was one traumatic glitch in our week of powder: a lost puppy. In our neighborhood, a free-range zone for pets, it was common for dogs to wander off for a while. We never owned leashes and never worried about the dogs getting lost. We just let them outside and expected they’d come home when they got hungry, which they usually did. But during the Blizzard of '93, our six-month-old yellow Lab puppy Penny got lost. She was the same color as the snow and she just disappeared into the storm while we were building forts. We hiked all over the neighborhood, calling her name even though she didn’t even know it yet. About a week later, when the snow was turning dirty and the fun was wearing off, Penny wandered back. We found out later that another family had taken her in during the storm and, when it was over, she simply walked home.

In retrospect, the Blizzard of '93 was idyllic: drinking hot chocolate made on a camp stove, sleeping on the floor with all the blankets we could find and then towels thrown on top of them, sighing every time the sun came out, not ready for those inches to melt and for life to go back to what it was.

Snowstorms aren’t as fun when you’re grown. As comfortable as it is to hibernate every once in while, to really be at home, it reminds you that you aren’t young. You hear the shouts of neighborhood children and the occasional adult re-living the easy joy of speeding down hills, and you feel guilty for not joining, for sitting on your couch when you could be breathing hard with laughter. There are so many reasons to stay inside: you’ve got the day off so you might as well clean out your closets, and you’ve always wanted to make bread and there’s plenty of flour in the pantry so you might as well do that instead of getting snow in the cuffs of your pants. There are books to read and papers to grade and endless episodes of Law & Order to catch up on. Besides, you don’t have the clothes for sledding and it’s too cold and you’re just so cozy. So you stay inside but feel a little guilty for enjoying the heated interior of home.

The first storm of the winter just hit in my hometown. Unlike most of the neighborhood, my parents haven't lost power. A neighbor is staying at their house tonight, the same neighbor whose house we stayed at seventeen years ago. Things are different now, of course. None of the kids live at home. We deal with power outages and cabin fever on our own or with new families and friends. Penny is gone now, and so is Sam, and, sadly, terribly, so is Malcolm, the father and husband of that family we stayed with 17 years ago. And this, when the world is still but for snowball fights and sledding children, is what makes me miss the Blizzard of ‘93. Not just because we were all there, but also because the idea that someday we wouldn’t all be there hadn’t yet penetrated our minds. Our world was snow and sledding and finding puppies and, we thought, it would  always be.