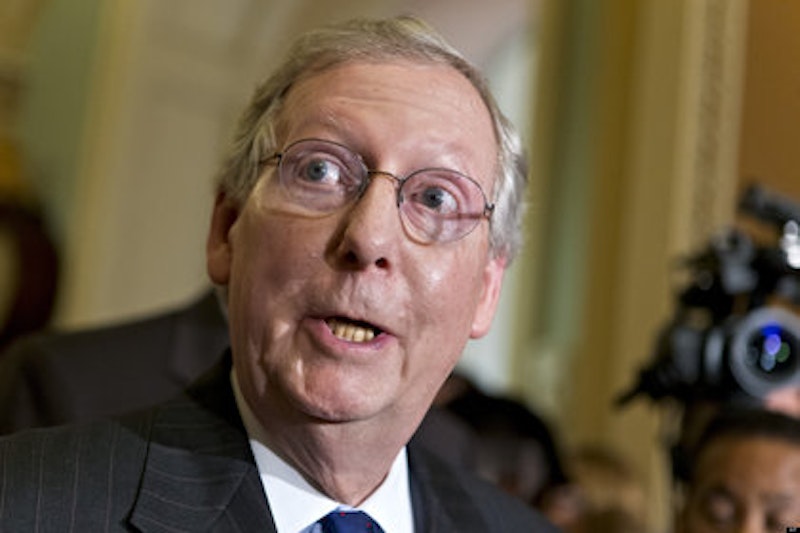 Dear Sirs: “Sen. Bob Corker, R-TN, got so frustrated with McConnell’s presentation of events that he called 'bullshit' loud enough for the room to hear, nearly a half-dozen sources said.” Yes, that's what it's like listening to Mitch McConnell, leader of the Senate Republicans. The quote comes from an account in Roll Call of a recent meeting where McConnell bitched at his followers about the recent filibuster deal.

His “tone” triggered the outburst, the article says: “McConnell’s tone, according to multiple sources, implied that he had been kept in the dark about the talks between some in his own ranks and Democrats.” He didn't make the accusation outright, but he acted it beautifully. He behaved and spoke exactly like a man who has been blindsided and now witnesses the mess his followers have created. No wonder Bob Corker couldn't take it.

McConnell is not a room-filling man, someone with a big personality. But like a lot of Republicans he has a gift for getting across a story about events, and he can do it by implication and almost-saying. The trick is to start form the premise that you are entirely right. Not that you're substantially right as verified by outside facts and allowing for personal subjectivity. Just right, with everything else shorn off. You're right because you're mad and your mouth is open. Start that way and the facts and words arrange themselves. An especially clever man, like Mitch McConnell, can succeed so well that an august senator will want to clobber him. Signed, One who knows them.

Dear Sirs: Anthony Weiner says that since his crotch-pic disaster he has become kind of spiritual, “more mindful of the moment.” Yes, he's running for mayor of New York City, which is quite a ballsy thing to do when you're best known for being a disgraced liar. But in the old days, he says, he would already be “gaming out my State of the City address.” Now he's holding off until he's nominated and elected. I guess for him that's taming the ego. Signed, People live like that.

Dear Sirs: If you wonder why gay rights took so long, watch In and Out. It's a 1997 comedy that stars Kevin Kline (pictured) as a teacher who discovers he's gay. The story's climax is kicked off by a hip young movie star who flies to the teacher's little Indiana town and lectures everybody about gayness and how there's no such thing as gay cooties. “I'm sorry, I'm a little slow,” he says to the school's fuddy-duddy principal. “So, stay with me here, what you're saying is, that because Mr. Brackett's gay, he's going to send out some sort of voodoo vibes or, uh, gay microwaves and make everybody else gay.” This is all in front of the high school's graduating seniors and the townspeople, with everything lit like a commercial for breakfast cereal.

The writer was Paul Rudnick, somebody who produces excellent light essays and feeble screenplays. But the movie star's speech is extra-feeble; it's embarrassing. I imagine Rudnick's brain as being squeezed shut when he typed the thing. Anger and shame crowded him. Basically, what the speech argues is that gays are not sources of contamination, that they aren't in the same category as plague germs and radioactive waste. Imagine having to say that about yourself. So Rudnick falls into a sickly daydream in which the excluders are talked down to and enlightenment drops upon their dull, blunt heads.

Of course, the talking-down is performed by a movie star. When regular America needs its evolution kick-started, Rudnick figures that somebody from Hollywood should do the job. He and the characters all accept that a movie star can walk into a high school graduation ceremony and take over. After Kevin Kline is cheated out of his teacher-of-the-year award, the star (he's played by Matt Dillon) waves an Oscar in the air. “Well, maybe Mr. Brackett deserves something else,” he says, and everybody cheers because nothing beats an Oscar. It's a stunted worldview.

But that's a secondary point. Mainly the scene demonstrates how hard it is to argue that you're not a diseased piece of shit. Put somebody in that position and it's rare that you'll get him at his best. Signed, The times change.