The 1940 Disney version rightfully stands as the definitive American Pinocchio, but a new translation of the original 19th-century book has depths that no movie can express. 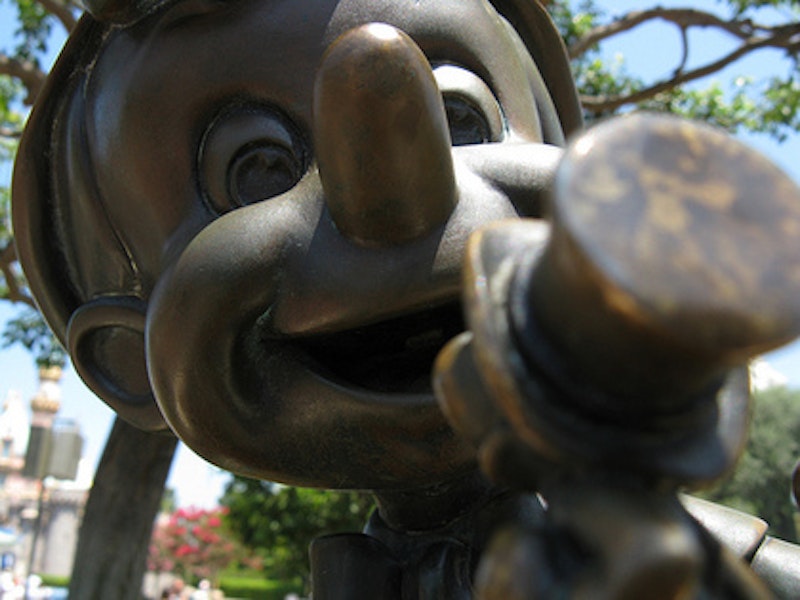 It’s tempting to read Geoffrey Brock’s new translation of Carlo Collodi’s 1883 novel Pinocchio and think less of the relatively sanitized story that Walt Disney brought to life in 1940. Collodi’s vision is satirical and frequently horrifying, whereas Disney’s indelible version is warmly populist and filled with whistle-worthy melodies. In the movie, the company’s second feature, we perhaps see the worst aspects of the Disney empire in embryonic form: a beloved world folk story digested and regurgitated as a mushy children’s tale full of easy moralizing and anthropomorphic sing-alongs. If McDonald’s had existed in 1940, Disney’s puppet would have been a Happy Meal toy (although probably not a popular one; the movie didn’t even recoup its multi-million dollar budget at the box office).

Such a judgment has more to do with our contemporary perception of the Disney corporate monolith than anything in the original film, however, which is one of the great adventure movies this country has produced. Whatever matchless talents the Walt Disney Co. has since shown for self-promotion and branding are more than equaled by the 1940 team’s artistic achievements; among other things, their Pinocchio was the first animated film to give the illusion of a world outside the visible frame, and the first animated film to recreate panning and zoom effects that, at the time, were unavailable to live-action film crews. (In particular, the “shot” that brings us into the village right before Pinocchio meets Honest John on the way to school is an incredible illusion of deep focus and three-dimensional scenery.) Brock’s new Pinocchio shouldn’t be seen as a corrective or refutation of the Disney version—if anything, it implicitly displays Walt Disney’s tremendous ability to streamline a serially published picaresque into an audience-friendly and culturally transcendent (the movie is popular all over the world, including Italy) three-act cinematic story. It also happens to be a fascinating read on its own terms.

Umberto Eco’s informative introduction to the Brock version lists, point by point, a few of Disney’s alterations to the Collodi story. Among the more salient differences is the appearance of the Talking Cricket, who appears early on to chide Pinocchio for his numerous misdeeds and is quickly squashed by a thrown shoe. No tailcoat, no talk about consciences, no “When You Wish Upon a Star”; the Cricket is just one of many small casualties in Collodi’s story of a pernicious wooden “rascal.” Throughout the novel, Collodi’s protagonist remains something of a smartass, not the childlike blank slate of Disney’s conception. Also notable are the puppet’s respective origin stories. Rather than a gift from the Blue Fairy to reward Gepetto’s existing paternalism, Collodi’s puppet is alive at the book’s beginning, as an untouched piece of wood. “Once upon a time there was…” the novel begins,

“A king!” my little readers will say at once.
No, children, you’re wrong. Once upon a time there was a piece of wood.
It wasn’t a fancy piece of wood, just a regular woodpile log, the kind you might put in your stove or fireplace to stoke a fire and heat a room.

The implication, excised in Disney’s telling, is that Pinocchio’s character—grating, stubborn, frequently disrespectful—is a naturally occurring phenomenon, even a human archetype; “I don’t know how it happened,” the narrator adds.

Disney, however, clearly meant for children to relate to their Pinocchio’s struggles: balancing school and rebellion, listening to grown-ups, honoring family. This is more a re-focusing than a wholesale rejection of Collodi’s novel, which, despite having a definite moral thrust for its young readers, never quite settles into a specific genre. The opening refutation of children’s expectations (anticipating Roald Dahl, specifically the evil glee with which Gene Wilder responds to “By gum it’s gum!”) is the first sign of Collodi’s cruel humor. He then subjects Pinocchio to a horrible series of punishments: his wooden are feet burned off, he’s hanged by roving murderers and later robbed, he spends months in jail, he’s nearly fried and eaten, and of course, he turns halfway in to a donkey and is subsequently swallowed by a shark. Such cautionary violence is as old as children’s literature itself, which is why jokester Collodi’s occasional parodies of traditional morality tales pop up, as well. Thus Pinocchio receives plenty of good aphoristic advice:

Woe to any little boy who rebels against his parents and turns his back on his father’s house! He will come to no good in this world, and sooner than later he’ll be filled with bitter regret.

As well as plenty of nonsense:

Pinocchio ran to look at himself in a basin full of water, he was so pleased with what he saw that he began strutting like a peacock, saying, “I look like a real gentleman!”
“It’s true,” replied Gepetto, “because it isn’t fine clothes, you must remember, that make a gentleman—it’s clean clothes.”

In these parodic and self-reflexive moments (at one point a group of boys starts throwing books at Pinocchio, including “a couple… by a fellow named Collodi”), the writer best resembles proto-metafictional works like Tristram Shandy or Swift’s A Tale of a Tub and Gulliver’s Travels.

Scene for scene, Collodi’s version is darker than Disney’s, which is really just a showy way of saying that it’s more violent. This isn’t a point against Disney, however; literature offers a certain imaginative distance between description and visualization that film obviously destroys, and artists in the different media have accordingly different responsibilities to young audiences. And it’s not as if Disney’s version is a lighthearted romp—for every “Hi Diddley Dee” there’s a scene like the one in which the “camera” pans away from Gepetto, who sits in enveloping gastrointestinal darkness and laments, “We can’t hold out much longer. I never thought it would end this way… Starving to death in the belly of a whale.” And when Disney does exploit the visual medium’s immediacy for terror’s sake, his Pinocchio is a peerlessly frightening children’s cartoon, all the more so for the many innocent song and dance routines that surround the dark sequences.

Geoffrey Brock’s new Pinocchio is startling for the book’s differences with the more famous cartoon version, but it’s also a needed reminder of how artfully the early Disney movies repurposed their source material into new forms. For better or worse, it’s the “Give a Little Whistle” Pinocchio that looms largest in our collective consciousness, and we have Walt Disney partly to thank for the continued interest in Collodi’s playful, forward-thinking novel. Brock’s translation is the perfect occasion to discover the original Pinocchio, and to marvel at the universality of its morality and invention.