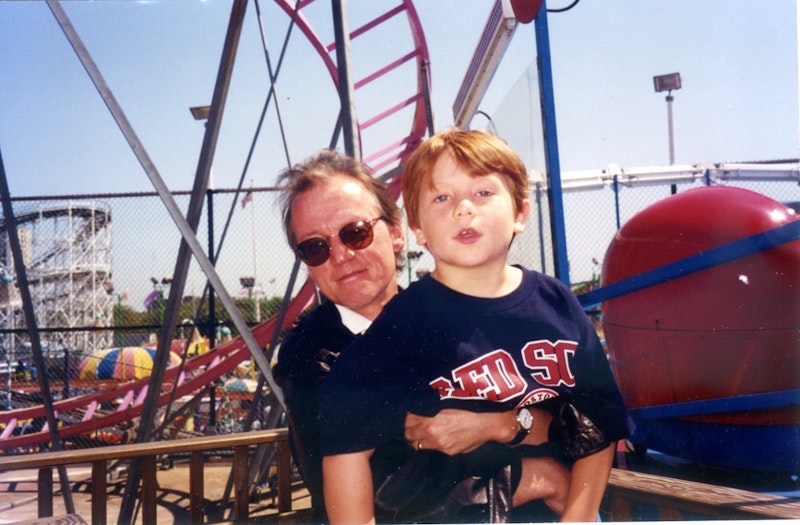 As the final two weeks of MLB’s regular season zip along, Red Sox fans like me are on a perpetual roller-coaster ride (illustrated above from a 2002 Coney Island excursion, me with son Nicky), fretting about the no-pop Sox holding off the Yankees to win the AL East. As a Sox pessimist, I have my doubts: the New York team is far better, at least on paper, and it’s actually fairly surprising they’re still looking up at Boston in the standings. (The Sox, as of Wednesday morning, are three up on the Yanks.) It’s pre-playoff baseball, hanging on every pitch (which I do in April as well, in truth, although one can reconcile a loss with a full schedule ahead), and I nearly chew off an entire finger during exasperating games.

The Sox’s 10-8 win over the Orioles in 11 innings (Boston’s now 15-3 in “free baseball” games) on Monday night was especially gratifying, and surprising, since the O’s knocked out the fading Doug Fister after two innings and at one point led 6-1. De facto captain Dustin Pedroia fouled a ball off his nose and had to leave; 20-year-old Rafael Devers (an offensive star in the making) continued his butchery at third base; eventual hero Andrew Benintendi was shaky in left field; and the mysterious Xander Bogaerts, who hit a key homer, continued his Derek Jeter imitation as shortstop with his flashy, acrobatic throws, often to the detriment of the team. The Yankees had already dispatched the Twins, 2-1, so you know they had to be pissed watching the Sox’s improbable win in their clubhouse. Some fans called the Sox “resilient” and “gritty.” Okay, but as usual, they dug an early hole for themselves.

And on Tuesday night, Boston won again in the 11th on a wild pitch, a final score of 1-0, which says a lot more about the team’s dominant bullpen than it’s struggling offense. That the Orioles, who have sluggers from here to last place, were shut out was fairly remarkable.

The infamous (to Boston fans) September collapse of 2011 isn’t applicable here: this year’s Sox haven’t folded, even though the team is far less talented. I nearly puked last weekend when the Orioles laid down for the Yanks, barely salvaging one game on Sunday, while the Sox took two out of three from the Rays, much more taut games. There was a lighter moment on Saturday night’s game, the Sox winning 3-1, as guest NESN commentator Jarrod Saltalmacchia apparently, for reasons unknown to me, had viewers in stiches telling ghost stories during the game. Sox-owned network NESN isn’t—if not disgraceful like the stations of other teams—so hot, with the very bland Dave O’Brien in his second season taking the straight announcer role (and who’s not still bitter that the excellent Don Orsillo was fired by tone-deaf Kremlin-like Sox ownership and took a job with the Padres?), and with Jerry Remy sidelined by cancer treatments, there’s been a rotating cast of so-so color guys. That’s when the hilarious straight-shooter Dennis Eckersley isn’t available. Jonny Gomes, Jon Valentin, Todd Walker, Salty, and so on.

I got a kick out of Salty on Saturday, not for his Casper tales, but this ridiculous comment, paraphrased: “I cringe when I hear the word analytics [meaning sabermetrics], they just can’t measure a guy’s heart or clutch performances.” I told my son Booker, a sabermetrician since he was about 15, expecting a snort, but he simply smiled, and said, “I like when old-school dolts [or younger ones; Salty’s 33 and still hopes to catch again] say stuff like that; it proves a point.” I’d be relegated to a strictly “old-school” fan, in both years and attitude (I hate the “Utley” rule at second base and “Posey” rule at home plate; don’t care for inter-league play; and approve of pitchers retaliating when one their own was hit by the opposing hurler), but for Booker’s tutelage. So I’m fairly conversant in sabermetrics, don’t care if Chris Sale wins a ton of game so long as the Sox prevail, and know that counting stats like RBIs are a throwback.

In The New York Times on Sunday, Clyde Haberman wrote an “Editorial Notebook” shortie on baseball, maybe a reward for all the typos in his news stories that’ve multiplied since the Times ditched their fact-checkers. Haberman started off with the obvious: the Indians’ recent 22-game winning streak, the Dodgers (West Coast Yankees) losing 16/17 and then wrote the following: “Much of the baseball world’s attention, though, is on a single player: Giancarlo Stanton, who plays right field for the Miami Marlins. He has been hitting home runs at a pace worthy of Roy Hobbs in 'The Natural'—54 of them going into the weekend. This has put him at the center of intriguing debates among the sport’s devotees. If there’s one thing that die-hard fans love more than baseball, it’s arguing about baseball.”

Come again, Clyde? One, I’m a diehard fan, and like many of my fellow Sox followers, I couldn’t care less about anything other than the Sox winning, and failing that, the Yankees losing. Two, aside from the trite reference to Roy Hobbs, I’ve yet to hear a passionate discussion about the Miami Jeters’ (oops, name change next season) Stanton and his chance of topping Roger Maris’s 61 homers, his stated goal. Stanton’s a fabulous player (not in Mike Trout’s league, but no one is), when healthy, and the really interesting debate is where he’ll be traded in the off-season so the Marlin’s new management can pare payroll. Much is made of Barry Bonds’ steroid-tainted home run record, but who’s to say Stanton (and loads of other players) hasn’t availed himself of a new pharmaceutical boost that MLB, always slow on the take, hasn’t gotten wind of yet?