Philip Roth? He Was a Star

A look at a very modern sort of career. 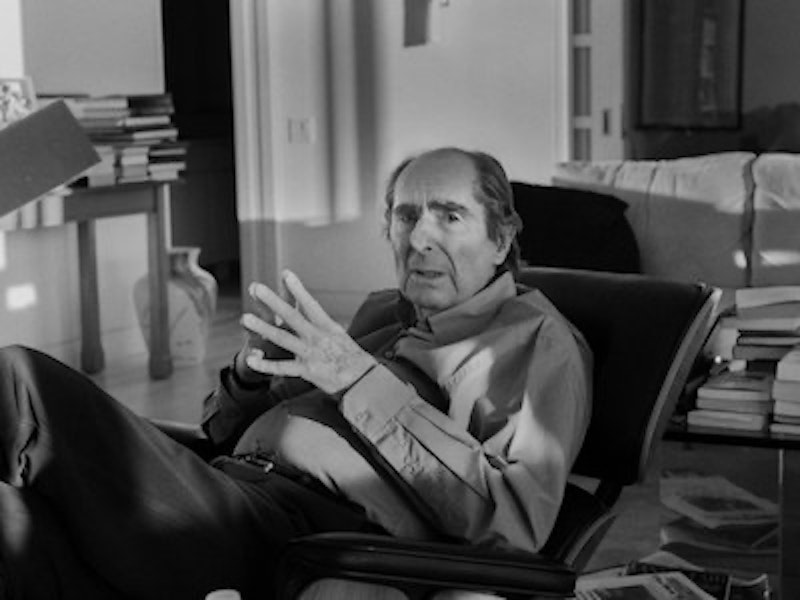 The Ghost Writer may be the acid test. Take it seriously and you can look at the edifice that is Philip Roth and see not a brick out of place. React otherwise and the past 60 years of American lit come off as something of a bluff. I’m one of those that react otherwise. Not that Roth lacked talent. If he didn’t have talent, there’s no such thing. The same for intelligence, the same (God knows) for a sense of mission, for a sense of vocation, for the kind of commitment that’s strong after a lifetime. The man didn’t give us a shelf of books. His books filled shelves, plural, and they were literature, just like the Library of America said. Further, most of them were fun to read and worth the time, and they still are. But they have a deep streak of fatuity, and in Ghost Writer that streak surfaces like crazy. So I see the book as a cut-off point. Take Ghost Writer seriously and you’ll take anything that’s Roth.

I’m on the near side of that line: for Roth but not, shall we say, with him. I think his books are very satisfying if you’re a wise-guy of a young book reader who yearns to mouth his way into landing girls. I think they’re still good if you read them in your 30s and ponder the way lives turn out. And I accept that his late novels are a few steps over from Zuckerman et al., that they’re more of a novelist’s work than a self-chronicler’s. But the man talked about himself and his prose usually tended to sound the same. The Roth voice rang loud and true and very close to one’s ear, and most often what you heard had some reference to the owner’s digestion—no, sorry, to his psychic troubles. Either way his piping was disarranged and he figured you had to hear about it.

To me American Pastoral and I Married a Communist, to take two late-life books, read as if the voice had finally strayed off topic (“So enough about me. How about that suburban Job figure whose daughter became an armed revolutionary?”), but not way off topic (“So enough about me. What if the Red Scare was going on and my bitch ex-wife and her crazy daughter did something really bad to somebody?”). Then, in The Dying Animal and Exit: Ghost, he was back with the interior piping and the alter egos. The Roth psyche owed us a summing up as it approached the ultimate life-stage, or maybe two summing ups. Anyway we got them.

This self-reporting strikes me as attractive but silly. Roth, the ex–grad student in his penny loafers, always wrinkled his nose at the show biz dementia that had worked its way into present-day life; the opening to his old essay “Writing American Fiction” is a neat tune on the subject. But show biz is the business of “Look at me,” and look what he was doing with those Tarnopol-Kepish-Zuckerman books. And finally a Roth book, a hat trick where the fictional stand-in was Philip Roth. Operation: Shylock, the Roth book, may have been the best of the bunch. As a writer, the man didn’t give short weight. But let’s be snobs. If you write literature, can’t you do so without waving your arms and telling people to look you over? If you can’t, your books may still be literature, but they’ll be literature that aids you, the author, in living large. They’ll be an apparatus giving you a magnified self, a billboard self that can be seen for miles and pointed at by strangers. Vulgar? Well, one might say so.

In “Writing American Fiction,” Roth prettily lets us in on the affront suffered by his then-wife’s sense of moral fitness, aesthetic decency, simple probability—the jolt suffered by a sensitive being’s mental gyroscope when the world acts crazy and human values are set in a twist—because she heard the radio announce a contest where kids could win “cash prizes” for writing little television plays. “It is difficult at such moments to find one’s way around the kitchen,” Roth says. The floor rises up, the walls tilt, or so Roth expects us to agree. He wrote the piece in 1962, and by the end of the decade American life had done things stranger still than stage a radio contest for kid scriptwriters.

Fair enough, Roth might say, but I caught where things were headed. Sir, that’s the half of it. You’re also where things ended up. Portnoy’s Complaint came out in 1969 and that was a pisser as unlikely events go. If our human values have to be screwed for kids to enter script contests, doesn’t something have to be torqued pretty bad for the world to end up with a hot piece of lit describing what appears to be your (the author’s) masturbation habits? You’ve got your underwear on the outside, sir. Then you spend decades on the underwear question (how does one like having it out there? does it still itch, and why?). Everything else in the world gets stuffed into one of the deftly sketched backdrops behind you and your fretting. And in this way you create a literary franchise, a series of high-lit novels that show how important an author can be because there he is, front and center. Neat work for somebody who wouldn’t do Cavett.

The Ghost Writer, that slim volume, is the buckle of the franchise, the moment where Roth picked an alter ego (Nathan Zuckerman) and made writing about him his chief business. It’s also a book about the burden and wonder of producing lit—lit, that peel-the-soul-back stuff that must be conveyed in a style purified by monkish decades at the desk. The young writer in the book gets laid an awful lot, including by ballerinas; the old writer in the book also gets laid, in his case by a pretty girl who’s great at writing. The young writer’s sex activities call forth alliteration (“pinned her pelvis to the floor”), and the old writer talks at length about literary masterhood and the deprivation that goes with it. Apparently one misses out on a great deal while at the desk, plus the back pain. Accountants don’t suffer that way, of course. Neither do lawyers. It’s just the creative folk, and there’s nothing that can be done. Don’t, for God’s sake, suggest backing up from one’s navel and taking an interest in the fate of somebody else. Volunteer work in adult literacy? Nah, the hunger artist must do his liver chewing.

Take this line seriously and you can buy the pelvis pinning and the forging of the young artist’s destiny and the rest. Gag over it and you must wonder what Roth was doing. What he was doing, and I think it accounts for the book’s vulgarity and solipsism, was something very modern and perhaps not yet recognized: he was showing how literature, the thing itself, could be made into a star vehicle.