No Homicide for the Holidays

The real meaning of Christmas vacation. 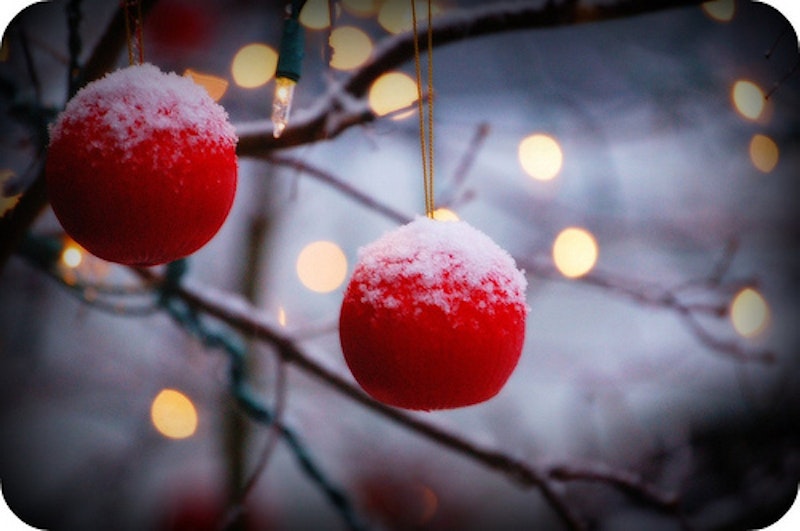 Christmas and family go together like egg and nog. There’s no way around it: you’re probably going to be stuck in a room with cousins and aunts and uncles (whom you barely know) and forced to open presents you don’t want and tell each one of them about your job, apartment, girlfriend (or lack thereof) and before that you’ll be on a jet with a thousand displaced New Yorkers in Los Angeles, or Chicagoans in Miami or Minnesotans in Denver and before that you’ll pay a fortune just to get there.

Every year it’s the forced co-mingling of the generations, the boatloads of booze, the uninspired heaps of food, the half-hearted hugs and the old wounds tickled and scratched. By about December 22 in every airport and bus terminal and Amtrak gateway, the nation suddenly returns to its ice age roots and goes nomadic—a great crush of humanity streams from one end of the continent to the other, zig-zagging over mountain ranges and bounding over rivers, bundled-up blobs catapult from NYC to LAX, fog-brained caravans slide from SFO to ORD, jobless hordes stampede from DTW to ATL.

Each tired pair of eyes blink back the domineering discount diamond sales, sensational shoe showdowns, proper pantsuit pandemonium—and, digesting along the way, a horse tranquilizer dose of holiday movies. There, on the billboard, on the TV, on your in-flight entertainment presentation—fictional cherry-cheeked families hunker down in Victorian mansions to air out old grievances and cook up catharsis in brightly-lit back-lot kitchens—one thing is certain, they come together blissfully at the end, reminding us that yes, it was worth it, wasn’t it, this whole getting together thing.

Was it, really? What are the holidays really about? The season isn’t about celebrating Jesus—let’s be honest, most of us know that Christ wasn’t born on the 25th and that Christmas was a long-established (deliciously debauched) pagan holiday quaintly sanitized by religion and state. It’s shouldn’t really be about spending time with my wild-eyed aunt with bi-polar disorder or my pathological liar uncle, or my bitter bloated grandmother who screams at everyone to diet or my cheerleader cousins who have less personality than well-painted fire hydrants.

For most of us, especially the twentysomething-with-a-job-that-almost-pays-enough-to-live-in-major-US-city adults like myself, Christmas time means you can finally break down and buy that antique spy camera, you can pay back some credit card debt and maybe even save a little, thanks to a volley of much needed checks from parents, grandparents and employers alike. Seriously. Cash. Getting it, spending it or tucking it away. That’s the true meaning of Christmas.

Sure, I love my family. But we’re not the big jolly group in my father’s childhood photo albums, the 20 smiling Italian cousins (six Anthonys, four Bobbys, five Sandras or just pick a saint) who all made their own sleds and slid down the sparkling streets to the Hudson river—nor are we the glitzy group in my mother’s photos, amid the teal waters of Jamaica with the executives and their well-shaped kids, the snowy sands of the Canary Islands with the board of directors of GE. It sounds defeatist but sometimes you just have to admit, Christ, maybe some things like the holidays were better a long time ago.

We learned the hard way a few years back—about getting the whole family together.

We met on an Alaskan cruise: a wonderful, exotic, exciting idea on paper but, as we found out, rather harrowing in practice. When you're on a cruise ship, especially when it’s cold and damp outside, and the whole thing has been paid for with togetherness in mind—you are forced to hang out with people you really don’t like … all the time. After two weeks with these morons who we were supposed to feel a connection to my folks realized that, besides the grandparents (who actually had a sense of humor), you couldn’t pay us to be around these assholes over a precious holiday vacation. They were monsters. This was supposed to be vacation, right?

But isolating ourselves at home created new dangers. By 1993 my mother and father started screaming at each other and breaking various household appliances for no good reason nearly every night of the week. They’d go at it about anything—what type of bagels were purchased for breakfast, who parked the car too close to the sidewalk, what color my mom dyed her hair that month. As it got worse and worse, I soon began to realize that the whole ship might crumble at any moment—soon there were whispers of infidelity, then marital incompatibility, and then mental (father) and physical (mother) instability. It got to the point where my sister and I would camp out by the upstairs heating vent and decide “who was winning” the fight of the night. It was all very exciting and disgusting. We started laying money down. We had point systems and everything. When I went to bed, I would sometimes close my eyes and pray that they wouldn’t murder each other in the kitchen.

On Christmas of ’94, it all came to a head. It was fucked up but true: My dear ma and pa were having a tearful, throat-ripping, heavyweight bout on Christmas Day. Not much joy on this day of joy. That year my mother decided to get my father a sweet synthesizer. When my sister and I came downstairs for our big moment around the tree, we found my mother guarding the keyboard with her life, screeching that he “would have to kill her” to get his mothereffing present this year. By the look on his face I wondered if he wasn’t actually considering it. I mean he really wanted that synthesizer. Instead he stormed off into the frozen rain. My mother retired to her room, weeping.

Taking a criminology course in college I was not surprised to learn that homicide and domestic violence rates often spike around the cheeriest of holidays and that most violent crimes were interpersonal disputes, violently misguided reactions to economic fallout, government corruption, community deterioration and/or feelings of societal or personal isolation.

Perhaps with this in mind, the next year my mother had a novel idea. Let’s get the hell out of town for the holidays. We stared at her blankly. Uh, where will we go, we asked. Anywhere, she replied. Somewhere great. Somewhere new. Arizona! At first my father was skeptical when she presented her grand plan. Arizona for Christmas? It’s dry there. We don’t know anyone. What about the snow? The lights? There’s no tradition. Silence. Exactly, my mother said with a determined grin.

To our immense surprise the trip was a blast. While Chicago was destroyed with 22 inches of snow and ice, we were swimming tranquilly in heated azure waters looking up at the stars surrounded by soaring cliffs, swooping birds and attractive teenagers in bikinis. We took pictures in front of the Grand Canyon, searched for UFOs with our new hippy psychic friends in Sedona’s spooky red rock valleys and rode a Harley into the desert. For the first time in a long time my parents seemed content, excited—even into each other. They went to bed joking around, and held hands as we watched old movies in Flagstaff or ate at a diner in Winona. When we got back, they developed the pictures and applauded each other on the choice of hotel, rental car, day-trips and packing strategies. The vacation, in retrospect, probably saved their marriage.

Long story short, we haven’t been “home” for the holidays since. Each year my mother feverishly plans a new adventure. My folks save money for that trip like squirrels save nuts for the winter. After many years of successful jaunts we found that, deep down, we didn’t need the rest of our family or the snow or the lights—it was all dead weight—we could make new traditions, befriend strangers, friendly people who didn’t come with any baggage: amateur gold panhandlers with their kids in California, surfing instructors and their dread-locked wives in Florida, grizzled brewery owners in Colorado, rodeo beauty queens in Mexico. Unlike our dull-eyed cousins and country-club uncles, these people were fun, well spoken and didn’t care that we were loners. Because we were always new they found us charming and entertaining. They took us in and taught us things. By the time we got home we felt refreshed, not exhausted and used.

Going away for Christmas is not for everyone. In this economic climate, it just won’t happen unless you’ve been lucky enough to save up some cash. But if your family is like mine and you’re a bit cracked, anti-social and you’d rather slam your head against a wall then hang around with most of your relatives, try it. Jump on a plane with the ones you actually care about and see what happens. If 10 days of pure sunshine, some swell shrimp tacos and a few cold beers are the only things that puts a smile on your face over the holidays—maybe the old phrase is true: you have to go a long way to come home better. And if going away is what makes you want to be together and stick together as a family, then to hell with that white Christmas and everyone in it.