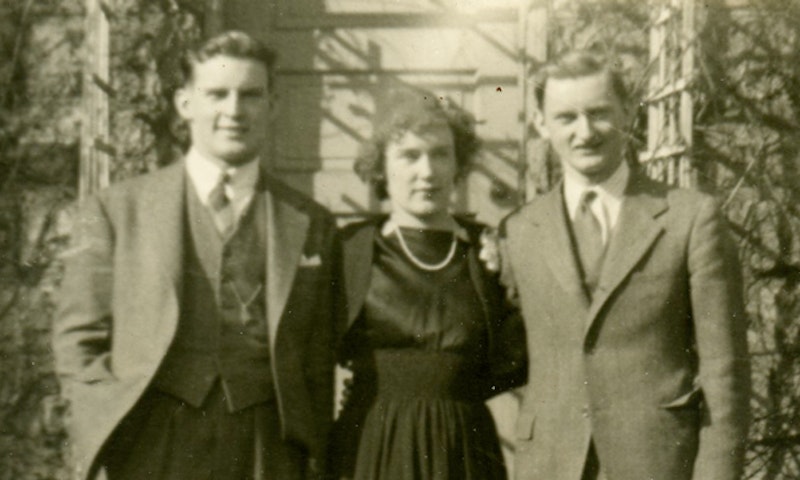 Last Friday evening, stuck on a marooned Amtrak regional train just south of Newark, my mind was spinning, going back and forth between the current chaos around me and a moving memorial service earlier in the day at the Calverton National Cemetery on Long Island, where my Uncle Pete, a World War II veteran, was laid to rest. Pete, one of my mother’s two brothers, was 88 when he finally succumbed to pneumonia, and though it’s always sad to pay final respects to a loved one, especially someone who was instinctively kind and brimming with optimism, there was no denying that his full life and the number of people he touched was one for the books. Yes, I’m biased, but Peter Robert Duncan was not only a great uncle, but also a great man who retained a childlike curiosity his entire life, while at the same time providing a sterling role model for his offspring.

Shortly before he died, my cousin Phil said, “Pop, you did it, beat the system and played by your own rules.” After laying flowers at his gravesite, which followed the elaborate and impeccably formal unfolding and folding of an American flag by two soldiers, who then gave it to Pete’s four kids, we repaired to cousin Veronica’s home in Smithtown, for what my uncle might’ve described as an “Irish clambake.” A dozen or so relatives and friends gave short remembrances of Pete, some hilarious to family members, some simply poignant, and though tears were shed it wasn’t a mournful occasion.

Understandably, that afternoon left me in a reflective mood, and I wasn’t even particularly ticked off when traffic in the Midtown Tunnel prevented me—by two minutes—from catching a scheduled train. Fearing the worst, as in having to pay for a new ticket, I summoned up teacher’s pet manners and was delighted when the Amtrak representative didn’t dun me for tardiness and issued a new ticket for a train that would depart a half hour later. (I’ve been riding Amtrak since the early 70s and when dealing with its employees it’s always a crapshoot; just depends upon who you’re dealing with and what kind of mood they’re in.) As if to punctuate this pleasing turn of fortune, I kibitzed with two of the guards by Gate 7-W at Penn Station, and cracked up when one of them said sarcastically, “Oh yes, ride Amtrak, it’s always on time!”

Against my better judgment, when the train pulled out of New York I struck up a conversation with the guy next to me, who was a world-weary salesman for a group of hotels grappling with today’s confusing advertising environment. He explained how difficult it is to gauge results from buying space with popular search engines, as opposed to years ago when the verdict from a strip ad in The New Yorker or Travel & Leisure was apparent in short order. Upon revealing my occupation as a journalist, he offered condolences. This banter kept my attention for five minutes or so, as did his intelligent, and negative, analysis of Amazon’s Kindle, but as he popped open another Bud Light, I got worried he wouldn’t stop yakking and hoped for that appropriate pause in conversation when strangers retreat to neutral corners.

As it happened, my new best friend was the least of the troubles ahead, as the train suddenly stopped and the electricity shut off. Mind you, considering all the perils of flying today—interminable delays, invasive security checks, lost luggage and about 18 other insults to civility—traveling by train is almost always a breeze. But snafus crop up occasionally, and I’ll never understand the instantaneous mass rage among the passengers, who are nasty and rude to the personnel walking up and down the aisles providing updates on the lousy situation. Granted, one of chirpy conductors got on my nerves as well, relaying erroneous information every couple of minutes—first, the engine needed to be inspected, then a “rescue train” was coming, and finally a new part would be delivered—but it wasn’t her fault that this ancient Amtrak model broke down. And it was her duty to inform customers that the bathrooms were temporarily out of order, as well as the air conditioning, no matter how many catcalls and hoots and hollers followed. During this interruption of service, the young woman was about as popular as Dick Cheney or Harry Reid, depending upon your political point of view.

Then it got interesting. I was poring over that day’s New York Times—shaking my head in disgust that the Nancy Pelosi/CIA dust-up was relegated to page A-20 rather than the front page—when it was announced that non-alcoholic drinks and snacks were available gratis at the dining car. There was a new, and rather appalling, bout of mayhem, as people ran to the café—something for free!—and cleaned it out in less than 15 minutes. Naturally, some took more Cokes, bottles of water and bags of chips than was reasonable, and then boasted about their hauls on cell phones. As I’ve argued before, the “culture of greed” didn’t originate in the past two years on Wall Street, but is a simple fact of life, on both minuscule (such as this stampede to hoard freebies) and grand levels. This is no defense of the crooks who contributed to what’s called “The Great Recession,” just an observation that inhabitants of “Main Street” aren’t, by nature, all that dissimilar to the men and women who looted so many financial institutions.

The train did finally get moving, lumbering onto stops at Metro Park, Trenton, Philly, Wilmington, Aberdeen, Baltimore, BWI Airport and finally Washington, D.C., and in the final hour of the protracted journey I dozed, a bit pissed that my younger son would be asleep by the time I got home, and reflected back to the memorial service. After my four cousins spoke and reminisced about their dad, it fell to my three brothers and me—the “Smittys” as Pete called us—to stand up and offer a few thoughts. As the youngest, I went last, and so some material was already used, but there was one anecdote that summed up, at least to me, the essence of Pete’s combination of generosity and Peter Pan-like curiosity.

It was the fall of 1970, and two buddies and I walked the several miles from Huntington to Cold Spring Harbor, where the annual fair was being held that day. I was 15, wearing the hippie uniform of light orange construction boots, jeans and a BVD blue t-shirt, and we were sorting through the bins of used clothing and records when someone tapped me on the shoulder. It was Pete, by himself, and when I asked what brought him from Queens to this neck of the woods, he laughed and said, “Rust Pal, you think I’d turn up my nose at one of the great events of the year?”

I introduced him to my friends, who almost immediately accepted him as “cool,” and the four of us went over to the cider press, batting away the yellowjackets buzzing around the rotting apples, drank up, and then Pete escorted us to the firehouse where a ham and turkey buffet was the centerpiece of the fair. He picked up the tab, which was great, but also engaged my friends in conversation about their favorite rock bands, opinions on the war and Nixon, and their embryonic plans for the future. He told them about his own kids, and the puppet and magic shows he performed at community centers in the Bronx, and then excused himself, saying he was on a mission to find some comic books for his youngest daughter.

On our hike back to town, Mike and Andy, normally cynical, and, as was the custom at the time, leery of anyone over 30, told me that Uncle Pete was one “righteous cat,” and really, there was no better stamp of approval. That’s what I thought about my Uncle Pete, and was tickled that I got to show him off, even by coincidence, to my friends. And as I played back this reel from nearly 40 years ago while the train made its way to Baltimore, all the uncharitable thoughts I had about the grubby passengers around me dissipated and I felt calm and chuckled to myself.