The author of The Brief Wondrous Life of Oscar Wao wonders whether Elvish is more "foreign" than Spanish. 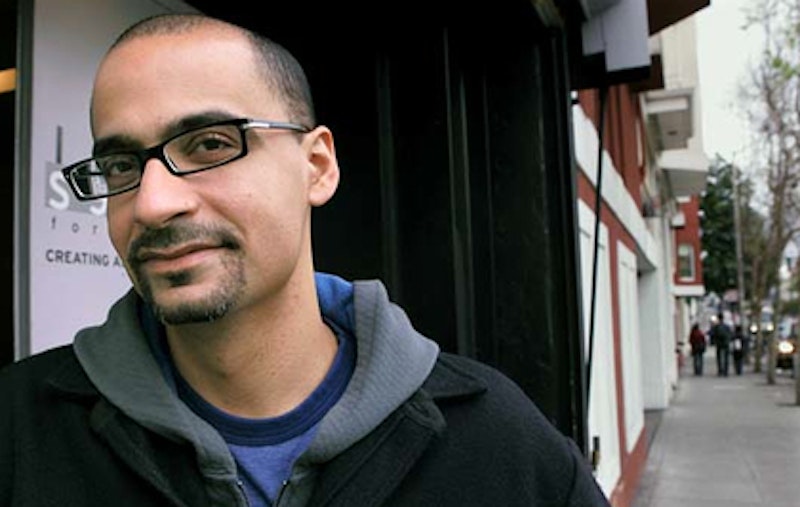 Junot Diaz was born in 1969 in the Dominican Republic and immigrated to New Jersey at the age of six. His first book, the story collection Drown, was published to immediate critical acclaim in 1996. A collection of highly autobiographical stories, Drown was written in spare, lean prose and included plenty of Spanish along with the English. It took 11 years for Diaz to publish the follow-up, but once The Brief Wondrous Life of Oscar Wao appeared last fall, the novel was hailed as an achievement on par with his earlier work. Splice corresponded with Diaz about Oscar Wao, during which time the book was given the 2007 National Book Critics Circle Award.


SPLICE TODAY: Yunior, the narrator for the majority of Drown, reprises that roll in Oscar Wao, although the narrative voices couldn't be more different. In the older book, he seems a little overwhelmed by the circumstances—poverty, adolescent sexual longing, family problems—that surround him, yet in the new book, he's found (like Oscar) some solace and confidence through literature. Why revisit his voice for your second book?

JUNOT DIAZ: Yunior in some ways is the perfect foil for Oscar. Yes, he’s grown in both narrative power and intelligence and he’s grown also in having to grapple with the consequences of some of his choices. But look at Oscar: he’s the kind of character than can imagine almost any possibility and yet he’s utterly incapable of passing for anyone but himself. Yunior is the exact opposite. He’s very honest in his writing but in his real life he has a thousand faces and seems utterly incapable of showing his true ones to those who would benefit the most from such an act of intimacy. Yunior in the novel tries to transform Oscar into a Yunior Light but it is Oscar in the end who transforms Yunior into an Oscar Plus.

ST: Your recent story, “Alma,” explicitly addresses the relationship between experience and art: as the story's teenage couple breaks up, the boy tells the girl, “This is part of my novel.” Are you asking your audience to read these works autobiographically, or toying with the expectation that they would do so anyway, like Philip Roth or Paul Theroux?

JD: Just that we deploy both stances as a way to obscure what is really us.

ST: Your prose is primarily English but also contains Spanish, which you've explained in interviews is natural for any person who coexists in Spanish- and English-speaking cultures as you do. Still, critics tend to mention it whenever they discuss your work, perhaps because the Spanish is mixed right in to the dialog and not merely set aside as an epigraph or quoted from some other book. What audience do you have in mind for your fiction? Do you envision your readers as needing a Spanish dictionary to parse the untranslated sections, or are they bilingual?

JD: Again I think it’s interesting that the “foreign” language that rubs mainstream folks in this novel is the Spanish when in fact the nerd-speak is more prevalent. It’s America’s long tradition of anti-Hispanic bias and nativism that makes Spanish so problematic and yet all the nerd-speak, which is where the book really reveals its intentions, doesn’t even get a second glance! I assume that this book, like all books, is a new world, and a good immigrant, when faced with a new world, pays close attention and tries to learn all the words he or she can. And the only way you learn is by asking other people. This book, like most books, is not a new world that can be tackled alone. That’s what’s beautiful about literature. It requires a collective to wrestle it into any kind of coherence.

ST: Certainly there’s more “nerd-speak” than Spanish, but you must understand that the average American reader might need clarification for Spanish and not for X-Men or Tolkien references.

JD: Again, I’m not so sure your claim is true. The “average American reader”—I have no idea who that is. But I know that there is a ton of Spanish spoken everywhere every day, and that in every school in the country there’s at least person who is an expert in Spanish. But where can you go to get an explanation of the Omega Effect if you’re not already in on the nerd cultures?

ST: Where did your initial contact with "nerd culture" happen? Were comic books and Stephen King considered normal reading for a young Dominican immigrant when you were growing up? Your novel would tend to say otherwise.

JD: I would argue that Oscar Wao shows that not only are the genres normal for third world peoples like Dominicans—they’re inevitable! Turn on Spanish-language television anywhere in the Americas and there’s a greater preponderance of the genre than in mainstream U.S. TV. In fact, my first experience with comic books was in the Dominican Republic when I found myself watching Spider Man cartoons dubbed in Spanish. Dragonball Z was a bigger hit in Mexico than in the US. The third world doesn’t only get inundated with the first world’s crap—we also get inundated with its genres. But because they are emblematic of the other, “better” world, they shine in ways they don’t in the U.S.

To be honest, nothing I did as a Dominican kid growing up in NJ during the 1970s and 80s could have been considered normal. I was the first of my cadre. There was no precedent. Everything was weird, including my love of hip-hop. To my parents and their generation that was more bizarre than reading sci-fi or Stephen King. It's the fate of the immigrant that he's viewed by everyone as out-of-the-ordinary, and that in many ways is what Oscar's problem (if you can call it that) is all about.

ST: Oscar Wao brings together and subverts a number of literary genres—immigrant family saga, Latin American "dictator novels," coming-of-age story, even oral history of a tyrannical regime—and this indebtedness to storytelling tradition is echoed by Yunior and Oscar's constant allusions to other writers. Do you feel that a multi-ethnic writer like you or Yunior has reference points in numerous cultures, or has the reading world globalized to the point where those kinds of distinctions seem unnecessary?

JD: The more “global” a culture becomes, the more diverse and fragmented, the more obsessed it becomes with the dream of cultural purity and the dream of cohesion. The world is so huge that it’s only by throwing every bit of language you have at it that you can hope to equal its stupendous complexity. Yunior’s ability to deploy all these languages says more about how a place like the Caribbean has historically survived than anything else, I would argue.

ST: You purposefully avoided labeling Drown a "story collection" or "novel" even though the stories share a similar tone and often the same narrator. Oscar Wao, however, is definitively stamped "A Novel" despite its equally fragmented structure and different narrators. Where does that distinction get made in your mind? Why was Drown simply "Drown"?

ST: To what do you attribute the change in your writing style between the two books? Drown is very spare and clean in its prose, yet Oscar Wao has the footnotes and a more aggressive voice. Was there a different set of influences for each book, or was it an increase in your confidence as a writer?

JD: Beyond getting better as a writer and striking out in new directions, Oscar Wao had completely different interests than Drown. Oscar is about dictatorships and how narratives can make and break us and about the terrible danger of “the one voice alone that speaks.” Yunior’s narration was fiercer because Yunior had survived tremendous things and had witnessed the deaths and defeat of people he really loved. It might have been interesting to render that story in muted tones but Yunior wasn’t having it. He was mad at himself and the blindnesses that allow such tyrannies to prosper: on the page, in the world, in ourselves.

ST: The Dominican dictator Rafael Trujillo looms over all the storylines in Oscar Wao, even the contemporary ones. Clearly there's a point being made about the persistence of historical violence throughout generations, but I'm curious about something you said in an interview, that your novel "required a Dark Lord." Can you clarify what that meant?

JD: This is a novel, in my head, that’s about authority. It’s also a fantasy novel of the classic kind. And such fantasy novels need their Dark Lords, their Saurons. Trujillo played the Dark Lord in this novel but in the end others are happy to take up the mantle. This novel argues that there’s something about humanity’s longing for authority that has parallels in a reader’s longing for authoritative narratives. I can’t say much more without tipping my hand, I don’t think.

ST: Could you recommend a book?