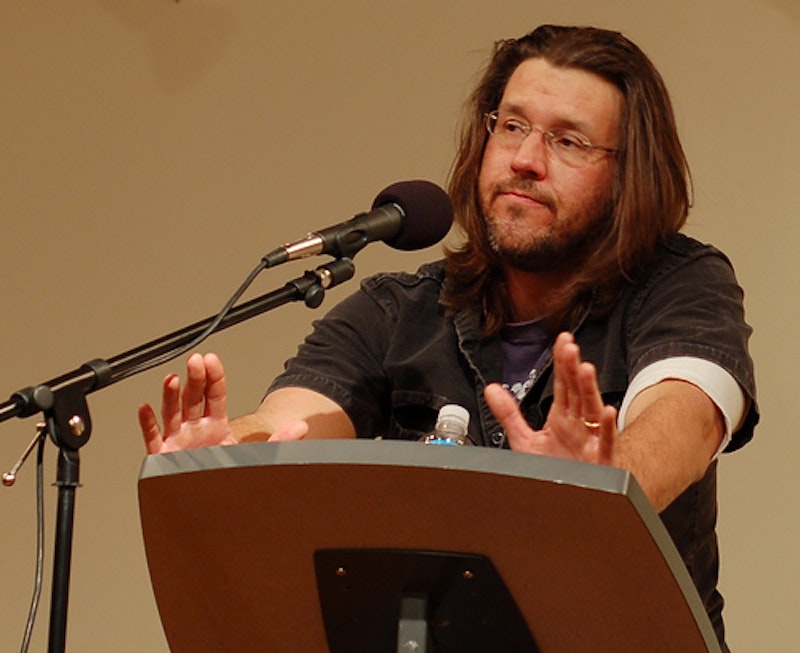 The first writing class I ever took the teacher wrote on the board, “I received 500,000 discrete bits of information today of which maybe 25 are important. My job is to make some sense of it," and then “DFW” just below. DFW is David Foster Wallace. DFW was a good writer. I argue good writing is boring, and so is the act itself.

David Foster Wallace’s latest/last, post-suicide cluster of a novel, A Pale King, is about boredom. It’s also about blah blah blah ever-lasting sentences blah blah mind-pick of the cultural hegemony blah blah blah depression’s cousin blah. Sorry, had to do it. A Pale King is a novel about boredom, as previously stated. And boredom is a good thing.

One source of boredom is an unassuming unidentifiable relation dealing with a really dry topic. French philosopher Henri Lefebvre speaks about boredom in reference to modernity:

The history of industrialized society is leading us towards the ultimate pleonasm: obsessive repetition in the flimsy, artificially sustained and illusory guise of permanent renewal, stagnation beneath the mask of frenetic agitation, news without newness and without a new life. The ‘worldwide’, the ‘planetary’ are already synonyms for the world of boredom, where the maelstrom of technicity leaves human relations and everyday life in its wake like so much stagnant jetsam.
Boredom will become more commonplace proportional to the level of technology’s autocracy in our industrial marketplace and artistic trends. Basically, the mechanical overthrow pre-apocalypse will be very boring. By the way, pleonasm means using too many words, I’m just saying. Lefebvre’s big stigma of ‘modern’, with an emphasis on the fallibility of history and our world’s fascination with technology, is the constant turn around of what is defined as "modern." "Modern art." "Modern literature." "Modern fashion." Is DFW just a modern interest?

If I were to ask you, you’d probably say, the opposite of boring is interesting, right? It sounds right. Of course, Lefebvre has his own two cents.

Unfortunately, interest is a short-lived phenomenon. It is quickly exhausted. The interesting becomes boring. As soon as it is no longer topical, as soon as the brief, orgasmic instant during which it disguises boredom is over, it too enters the realm of the boring, making way for boredom in all its unpasteurized purity.
So, boredom is simply the shed skin of interest? Maybe. A type of boredom, this type, the desensitized type, creeps in after over use. You can only get high off one hit for so long. But there are other kinds of boredom, the kinds that never were interesting, at least not to us in the ‘modern world.’ Math, to quite a few ninth graders, is boring because all the day-to-day quantifiable problems falling anywhere along the simple to complex spectrum are solvable on a phone’s calculator. Also outdated to most ‘modern teenagers’ are physical puzzles, ink-staining newspapers, and husbandry. The interest of ‘modern works’ is a fleeting thing, and in other cases, technology has rendered interest obsolete, old-fashioned, unneeded. So yes, I guess it is. Let me try to explain it again.

We as the 2.0generation-whatevers get bored easily. Quick posts. Tweets. Updates. No one would say our world is slow. I remember back in day I was taught that the most important line of an article is the first. All the information should be in the opening. The rest of the article is just for those interested. And for those that aren’t, they at least got the gist from the beginning. Here we have something.

Lefebvre said interest is fleeting, implying a timed life, while the boring dregs are left to race the sun to event horizon, or, in other words, are outside of time. If an abstract idea, whether true or not (required either/or junk), is of the big forever breed (in the case that it’s true, pending the above philosophical identity), and if we pretend to see forever at points quantifiable — imagine a forever rotating ruler with marks on both sides — then the ‘interesting’ parts of the looping ruler, because interests periodically flare up just like those annoying canker-sores you get after eating too much candy and therefore have multiple parts in terms of time, are small and the remaining parts, the boring, are vastly in the majority.  When dealing with infinity, the majority of infinity is, strangely, infinity. If the abstract thing is false, no one cares in the end. Interesting things may turn out to be true, but only time, and the subsequent boredom, will solidify that purity.

David Foster Wallace argues at multiple junctures that those that chug through the boring, e.g. people who audit all day, are courageous. And the rest of us? We try to escape boredom with the interesting. “[S]omething that’s dull or opaque fails to provide enough stimulation to distract people from some other, deeper type of pain that is always there, if only in an ambient low-level way, and which most of us spend nearly all our time and energy trying to distract ourselves from feeling, or at least from feeling directly or with our full attention.” This, meaning this hidden insecurity/drama/problem, may or may not be true, but let’s assume it is.

Open A Pale King at your local non-corporate bookstore and you’ll see some of that boredom I’m talking about. Tax code, IRS lingo, serial numbers with letters and that funny double ‘S’ symbol you thought you shook after calculus decorating the inside cover. THE INSIDE COVER! Fucking bore-ring. Try to read two lines and you’ll fall asleep, unlike the special caste of protagonists inside the book who,

did not read a page of say, dull taxpayer explanation about the deduction of some item and then realize that they’d  actually been thinking about the apple in their lunchbag and whether or not to maybe eat the apple right here and now until they realize that their eyes had passed over all the words (or, given the venue here, perhaps columns of figures) on the page without actually having read them at all – with read here meaning internalized, comprehended, or whatever we mean by really reading vs. simply having one’s eyes pass over symbols in a certain order.
So but what does this mean? Boredom is tough, but we need it. A little horizon looking never hurt anyone. Mathematician Bertrand Russell says boredom is needed in order to survive our exciting world of sensory overload. “A certain power of enduring boredom is therefore essential to a happy life, and is one of the things that ought to be taught to the young.” Russell believes in a controlled medium between excite and bore, and he continues on about teaching children the importance of boredom. “A boy or young man who has some serious constructive purpose will endure voluntarily a great deal of boredom if he finds that it is necessary by the way.” Hey wait; didn’t I say at the beginning that good writing is boring? That’s right, I did. Boring writing is the equivalent of constructive purpose, distending a goal to make it that much sweeter. You can’t just bust out a classic scroll hyped up on coffee and amphetamines. Well, not everyone can.

David Foster Wallace’s quote about sifting through the wash of information to get a few clean gems is what good writing is all about because it is boring. It is easy to just look at shit all day. Current life is full of NEW SHIT and OLD SHIT. But to have a constructive purpose, i.e. to live outside of, gasp, nihilism, is to sift through the boring, maybe even do something that is boring, and maybe you too can make sense of those 25 important things.