Flouting Convention in the 1960s 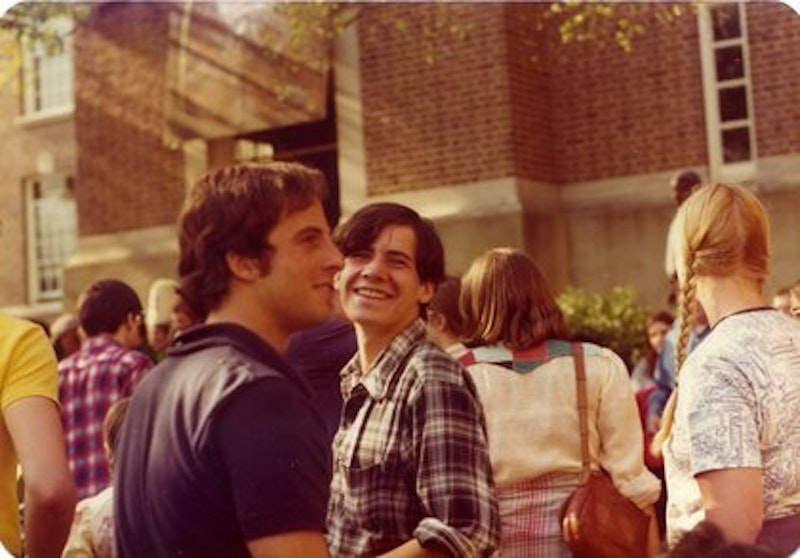 Minutes before arriving at Johannesburg’s airport in 1988, after a brutal overnight flight from London, my eight-year-old niece Bronwen asked me a question. “Rusty,” she said, “Do you think our hotel will be ready?” I lowered my glasses, and in a mock-stern voice, replied, “Bronwen, aren’t you forgetting something?” She blushed, and quickly corrected herself: “Uncle Rusty.” In fact, I didn’t really care one way or another, but to this day, Bronwen, now an adult professional in Manhattan, still addresses me as “Uncle.” (Not that her older sister and brother follow suit.)

I was reminded of this last week when reading Diana Kapp’s Wall Street Journal article “Children Put ‘Mom and ‘Dad” on a First Name Basis.” Apparently it’s a current trend—kids calling their parents by their first names—and Kapps does her due diligence, collecting a couple of anecdotes and the requisite quotes from several therapists who say exactly what you’d think. Kids testing boundaries, Boomer parents attempting to be “friends” with their offspring, adolescents acting out during “awkward” years, and so on.

Our sons have never addressed my wife and me as anything but Mom and Dad, although a few nicknames get tossed in. And Booker, like his cousin Bronwen, uses “Uncle” and “Aunt,” as well (and for the hell of it, never swears, taking a page from my dad and two oldest brothers). It’s not the biggest deal in the world, but I’d be taken aback if either boy called me by my first name. It’s just a case of manners; although I didn’t mind when most of Nicky’s friends, as teenagers, called me Russ. One of his buddies forced my hand: Alex, every time he came over to the house, did a relentless Eddie Haskell routine (undoubtedly without knowing it) and I finally told him to dispense with “Mr. Smith.”

I’m taking a circuitous route here, for what Kapp’s brief article really stirred up were memories of the Nadjari family in Huntington, NY—Howie was my age, and soon after he moved to the neighborhood from a Nassau County town in eighth grade, we became close friends, strengthened no doubt by also attending the same college. The stately Nadjari home on LaRue Dr. was a frequent meeting ground for our crowd—unlike my own, since my mother, who had little interest in housekeeping, strongly discouraged visitors—and I spent countless after-school afternoons there. One time, in 1970, my mom called to tell me that Jimi Hendrix had died—she was tickled to give me scoop, saying “Rusty, one of your rock stars overdosed, guess which one!"

Howie’s parents were delightful and very kind to his, and sibling Doug’s, friends. And here’s what was so odd, at least to me: although fairly conservative politically (Howie’s dad was a high-profile district attorney and then special prosecutor in New York City), their kids addressed them as “Maury” and “Joan.” I was floored, especially when they asked me to also call them by their first names. Remember, this was the late-60s, when such familiarity was, at least in my experience, extremely rare. It was a quirky family, and I mean that affectionately: although Jewish, neither boy was required to attend Hebrew school—which meant they didn’t cash in on a bar mitzvah, but Howie thought it was an excellent trade-off—and there was whiff of Bohemia that enveloped the household.

Joan was relaxed (I saw more of her than Maury, who was usually at work, save the weekends) and eager to talk to her boys’ friends, engage in real conversation, but knew exactly when to back off. In other words, she didn’t fit today’s model of parents who attempt to be buddies with their offspring. I suspected, or at least hoped, that Joan, before getting married and raising a family, was a 50s beatnik, maybe a regular at Greenwich Village coffee houses and clubs, drinking espresso and be-bopping to John Coltrane or losing herself at poetry readings. Now that I think of it, I’ve no idea why I never pressed Howie on her background, but at this point it hardly matters. Like me, Howie will turn 60 next year, but when we chat on the phone, or trade emails, he always assures me that his parents are in fine health, at least for a couple who must be in their 80s by now.

The difference between Joan and Maury and the eager-to-please parents Kapp spoke to for her article is that the former lived by their own rules, ones that came naturally, even though their behavior was considered strange in the context of American society nearly half a century ago. I still can’t quite get over it.