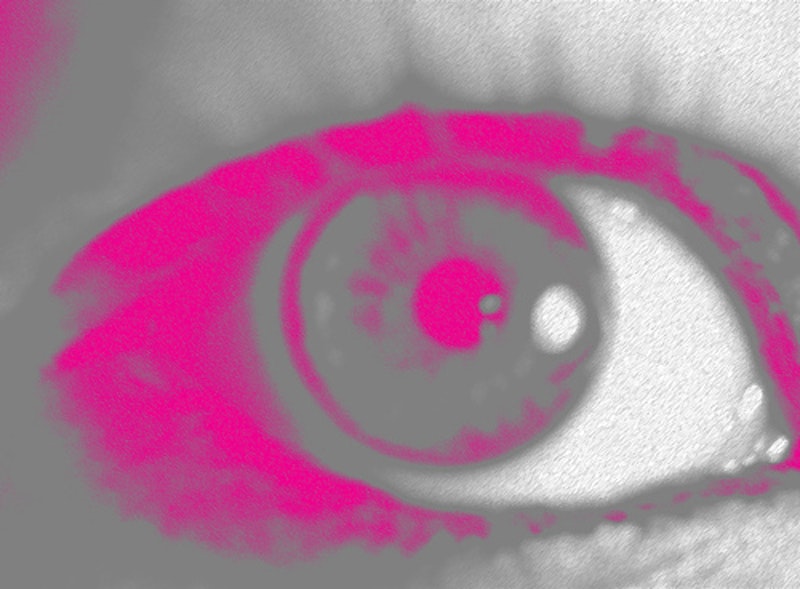 Day 4:
I opened my eyes to a heel wedged uncomfortably in my back, and an odd itchy sensation around my eye. I called him from the bathroom, where I stood before the mirror inspecting the affected area. “I think I got your weird eye disease,” I said as soon as he picked up.

“You’re such a hypochondriac!” he said.

“Fine,” I calmed down. “I guess I have a tendency to jump to conclusions. Wanna make out tonight? I think I’m falling in tolerance with you.”

He said he’d call me back but the phone didn’t ring for hours. Regarding the dormant phone every now and then between movements—I was trying to transpose Bach’s Fugue in C for the Gazoo—a familiar suspicion crept upon me as the day progressed. I sensed this to be the beginning of the fizzle.

Worse still, as my heart began to grow cold, my eye was becoming more enflamed. Finally, late in the night, roughly half way through my “Teach Yourself Salsa” VHS recording, I got a text from him. It was composed as if no time had elapsed and conversational with regard to the progress of a football game he was watching. He was clearly trying to gaslight me, and I might’ve been fooled had I not made such productive use of my day. “Bastard! You gave me your weird eye disease!” I texted back.

“Bastard? That hurts my feelings,” he replied.

I responded, “You hurt my eye,” “Bastard!” I added in a second text, mostly for the aesthetic.

Day 5:
The next day my eye was even itchier, and he still hadn’t called. Fast approaching the jetty of heartbreak, I felt myself torn in crossed purposes. Do I call him and get my hands on his medicine, or play hard-to-get and wait for him to call me in the hope of capturing his heart? Finally, I texted him. “I need your medicine!”

The day waned and every time my eye itched, I was reminded of the phone’s silent aria and the tiny fissures of rejection drawing a map across my heart. “Why can’t I at least get laid, contract Chlamydia, and THEN have a guy not call me back like a normal girl?” I thought as I tilted my head back to funnel a can of Natty Ice, and the tears began collecting at the corners of my eyes. This chaste bit of pink eye is so unnecessarily humiliating.

Concerned I might go blind should my condition go untreated, I called my friend Jacob who had recently undergone a Cerebral Meningitis scare—it turned out it was just a hang-nail—to consult. He suggested I check into the emergency room at St. Vincent's. “Theirs is the best for sexually transmitted eye diseases,” he explained.

Reluctant to pay for a hospital visit without any form of insurance, however, I put off the decision and instead looked up “pink eye” online. I came across a host of horrid photographic illustrations of advanced cases and, in a panic, I called him again, crazed and desperate. “Ahh,” I screamed into his voice mail, “This is not about you or me. My eye! My eye! Call me back immediately!” I hung up and took up a volume of Mallarme poems, in an effort to distract myself.

The phone rang eventually later that night. “What the hell is going on with my eye?” I said, before he had a chance to get a word out. I cringed, afraid to hear the details of my fate.

“What, who is this? Have we met?” he said bewildered. He wasn’t fooling anyone. Guys pull this shit on me all the time. Finally, he confessed to remembering our date and when pressed, it turns out, he had no eye disease at all. He had lied, he told me! The spot was, in fact, from a bodega fight late in the night a few weeks ago. He’d been arguing with the produce man over the increased price of blueberries and slipped and fell on a banana peel, which the man had placed on the floor for comic relief. He didn't want to create a bad impression, he told me, so he’d made up the skin infection. It was all in my head, he said.

“Yeah,” I said incredulously, “I suppose the lockjaw is all in my head too! Right?” I said feeling my jaw suddenly tight and trying to move it back and forth without it making that awful clicking noise.