The first part of a week-long series. 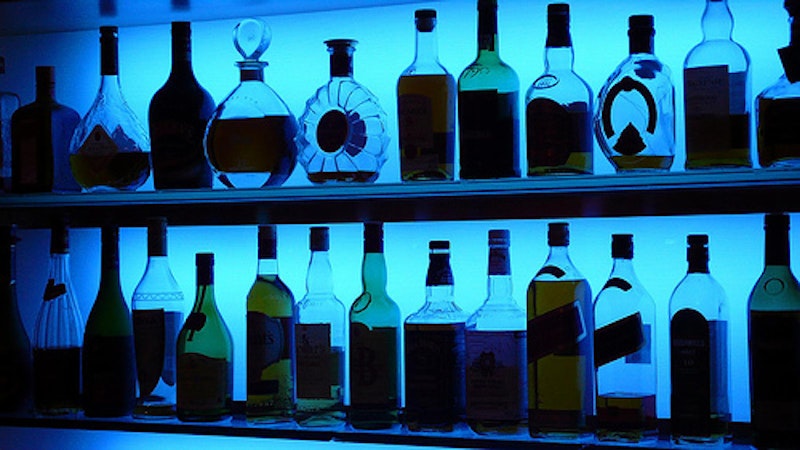 Day 1:
It was a Wednesday and I had planned to stay home, get some drawing done, write, read, lie around in my bathrobe, make dinner and have a glass of wine. Friends had called and invited me to meet them. “No,” I protested. “I'm staying in, going to take it easy.”

A jug of wine later, my apartment covered in paper snowflakes and cigarette butts, books splayed open in haphazard piles all over my bed, my coffee table, my stereo, my window sill, and the computer open to Craigslist Missed Connections, records piled up without their jackets “in or around” the stereo, I sat by the window, cursing the bottom of the bottle, and Soft FM’s DJ for not playing my song request. I changed out of my robe and decided to go out.

Across the street it was midnight and, what luck, a karaoke evening. I lined up a drink, dug into the book of songs, and went to work. I requested “96 Tears,” and waited for my song at the crowded bar, where I sat slouched, alone on a stool, making faces at nothing in particular.

Finally, they called my name, I approached the stage, took hold of the microphone, but then they began playing the wrong song, one I didn't know. Not one to complain, I sang it anyway, holding onto one note for the duration of the tune and occasionally punctuating my routine with some light yelps, howls, and screams. I guess my rendition was too avant garde for that crowd, because they cut me off mid-shriek. I went on a cappella for a while, until the host wrestled the microphone away from me. “Thank you,” I said daintily and left the stage.

As I made my exit, a shadowy figure stepped in front of me, blocking my path toward the bar. He was a man, apparently, but I could only make out the contour of his body. The booze had washed the rest out in darkness. “I really liked your performance,” said a voice emanating from the shadow.

“Buy me a drink or beat it,” I said pushing past the figure and resuming my position at the bar. The shadow sidled up beside me, and motioned to the bartender to give me another of what I was having.

We spoke at length about something or other—I vaguely remember going on about how much I loved the commercials for Men’s Wearhouse, poking him in the chest and yelling over and over again, “You’re gonna like the way you look, I guarantee it.” Eventually I invited him back to my place, or at least, I ran off in that general direction and he followed, perhaps excited by the chase. I ran upstairs and then poked my head out the window to see if he was still there. He was standing like a casual Romeo, with his hands in his pockets and seemed to be waiting for me. I yelled down, “If you go to the deli and buy me some bacon and a six pack, then I’ll let you up.” A few minutes later he buzzed. Inviting him in, I pushed aside some of the paper snowflakes to make room for him on the couch. I opened a couple of the beers, and stuffed a handful of bacon into my mouth and chewed furiously. Then we made out hard on the couch.

Day 2:
Beneath the kitchen sink and covered in soda crackers, I awoke the following morning. A text alert had startled me and I began searching my pockets for my phone. “Rise and Shine,” he’d written. I thought for a while of the exact sentiment I wished to express before texting back, “Buhh.”

He called that evening and I asked him to fill me in on what I didn't remember. “I'm about 6’1”, I have a medium sized head and a small face,” he said, while I attempted an amateur police drawing. “You said you liked the way I looked.”

I stared at my rendering, made with magenta and electric yellow crayons, trying to figure out if I was still attracted to him by the light of day, and whether or not I should accept his invitation for a date.