Dispatches From My Apartment 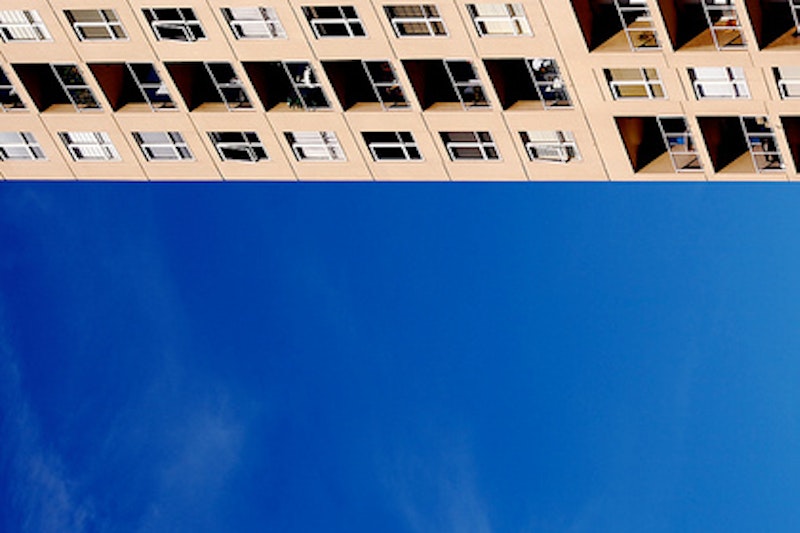 9:30 a.m.
I seem to be getting worse. I stare at the screen, at a website showing an image of two large soupspoons facing away from each other, inches apart, separated by destiny. Grasping my own two spoons in my right hand, I begin again frantically, sounding a silvery heartbeat with each flick of my wrist as I bounce the pair madly off my bare thighs—I’m in my underwear—until I’m out of breath. Resting, I indulge in a favorite daydream:

I’m at a swank dinner party and everyone is chatting away, bored stiff, until the soup arrives and I impress everyone by very elegantly going crazy on the spoons for a few minutes. When I’m done, they all applaud, and I wave it off saying, it’s no big deal. “Really, it’s not,” I say modestly, inviting everyone to just go ahead and ignore me and to please start on the delicious bisque provided by our lovely hostess, to whom I mouth thank you and blow a kiss. Later, after reciting Hamlet’s speech in Pig Latin to a captivated table of Nobel laureates, “Outay ebay, oray otnay outay ebay?” I juggle the roast, a cloth napkin and a tiny candelabra. When I motion to sit down again, a successful husband and wife team compliments me on the elegance of my dress.

I look down at my bare legs—the spoon blows have impressed a polka-dot pattern across my thighs—the shame! I give up practicing for the day and go to the kitchen. Holding the freezer door open, I stare into it and let the cold pour over me as I decide my next move. I remove the lid off a tub of ice cream and plunge half of destiny into Breyer’s Neapolitan. I go for strawberry, the only flavor left—a mohawk of ice cream down the middle of the container, the mid-ocean ridge. I think of plate tectonics and finish what’s left. I consider taking a nap, look at my watch, decide against it, as it’s not yet noon.

10:40 a.m.
I’m trying to change the bag in my vacuum cleaner again, but I can't figure out how to open it. I dreamed last night that I was discussing the problem with a friend—Reggie—who, after, examined it with no better luck. He tried to vacuum with it as it was, and then handed it back to me remarking, "Yeah, no suction."

Nearly all my dreams have been similarly mundane lately. So much so that in waking life, I often find myself confused, thinking I’ve accomplished particular chores about which I’ve only dreamed—like my laundry. Upon noticing the still-full hamper 10 minutes ago, the shock was total. But I just did a load last night! I thought, throwing a hand before my eyes to fend off the apparition. Or did I? I wondered, catching my balance against the wall. What can it mean, this jigsaw of my unconscious? I delved further, distractedly pulling a pair of pants from the hamper and getting dressed for the day.

It wasn’t always like this. I used to have dreams of far-flung fantasy. After closing my eyes, a masked lover would often appear at my window. Bathed in moonlight—which is a lot like the light of my Timex when I press the side dial—he’d call on me in the smallest hour of evening. From a part in the curtains he’d alight soundlessly, tumbling gracefully into the interior of my apartment. And then, kneeling at the foot of my bed, dark cape slung across his shoulders, and whispering to me in a voice of pure ether, he’d ask, would I mind darning his socks—an obvious pretext for testing my marriage quality. Yes! Yes! I’d say, Yes! And then I’d darn and he’d watch—his eyes like two flames, blacker than infinity, burning through me from behind his strange bandit mask.

1:20 p.m.
Someone saying he’s a cop knocks on my door and asks if I’ve seen or heard anything suspicious.

I say through the door, “This seems a little suspicious.”

My peephole is painted shut, so I continue the conversation, yelling through the closed door, warily. Apparently, yesterday, someone was robbed in the apartment just below mine.

“See anything on the fire escape?”

“No,” I say straining a suspecting ear toward the muffled voice, thinking, what if he were the burglar, and this were his trick—to pose as a cop investigating the very burglary he is about to perpetrate! Perhaps the burgled guy living downstairs, if there is any burgled guy living downstairs, that is, was robbed in just this fashion, and I am next!

Terrified, I make sure the door is double locked, but continue speaking the whole time so as not to let on that I’m wise to him. My mind is racing. What if he tries to force his way in? He’ll see what I've been doing—nothing! Quickly, I run to the TV and turn off Soul Train.

He keeps calling me “Ma’am,” the way cops do on television, but despite his slick "officer" impression, I’m not fooled. I don’t need a peephole to see him for the common criminal he is.

I imagine him dressed in one of those all-black outfits burglars wear in movies and Edward Gorey books. What a cliché! And yet, there is a certain sexiness to the outfit: formfitting, sleek, hugging the thief’s sinewy muscles, showcasing his dexterous movements as he maneuvers through narrow spaces, pilfering jewels and negotiable bonds.

In my reverie, I’ve neglected to answer his last question. …the way they sneak around in the shadows, cat-like and mal-intentioned, elegant, manly….

Softening to this image, I am about to invite him in for a cocktail and perhaps a few long looks. I quickly clear some space on my couch and give my cheeks a few pinches in lieu of blush. Perhaps I’ll offer him some coffee, reheat a few cups from the pot I brewed this morning.

I am about to open up when I hear him knock on the door down the hall and quite caddishly begin to pose the exact same questions to my neighbor! What wiliness! I think, quickly bringing a hand to my chest to find my heart freshly missing.

3:48 p.m.
This guy calls me twice asking for Ilene and recites my phone number back to me, asking if he’s dialed incorrectly. Ilene is the girl from the bar last night whose scribbled number on a napkin he is unable to make out. I begin to ask if he wants to talk about it, but he hangs up too quickly.

I really liked the sound of his voice and think about calling him back, saying something sharp and disarming like, “Is this Ilene?” before I confess charmingly that it’s just me again, the girl from before, and we share a good laugh over it. I imagine the whole conversation after that and decide I’ll say yes if he wants to take me out for pizza. But then I end up not calling after all, worried he might be cheap and ask me to pay for my own slice and then mock my diet soda. Jerk. For a minute I thought he might have been the one. Not the wrong number, but the right number. I wonder if I’ll ever love again.

3:49 p.m.
The package is for the tenant in the apartment downstairs. I decide I’ve earned a 20-minute nap.

5:37 p.m.
I write a poem in French. It’s very difficult because I don’t speak French and have to use an English to French dictionary that I found a week ago at a sidewalk sale. The poem is an existential meditation on the chicken that crosses the road repeatedly and, yet, doesn’t know why.

7:35 p.m.
I eat dinner and then record some fluctuations I’ve observed in the size and mood of my breasts. I’m something of an amateur alchemist and every once in a while I think I’ve discovered a formula for breast enlargement. I report fluctuations in breast activity in my daybook, which I’ve decorated with catfish stickers, and watch for emerging patterns over time. In 2005, I, perhaps falsely, linked chest expansion to relative Polly-o string cheese intake. Then, in the spring of 2006, my records suggested a connection between waffle consumption and swelling. In the fall of 2007, I believed I had uncovered growth inducing properties in corn dogs and various carnival foods, and just now, following a brief examination in my bathroom mirror and graphing the stats gathered from the last two weeks—I’m sure this time—it’s cigarettes, gin, whiskey, coffee, chicken parmesan sandwiches from Chez Brigitte on 11th St., 1/2 a Vicodin once weekly, fumes from certain varieties of paint thinner (I tried to thin my walls, in hopes of enlarging my apartment last Sunday), and from Pepperidge Farm’s “Entertaining Collection,” the occasional mint Milano.

Mood: Started reading Crime and Punishment last week and have detected a significant shift in attitude in both left and right. They are brooding where they were once amiable. Catching sight of them in the mirror earlier while dressing, I noticed them eyeing me antagonistically. If they could speak, they’d bark: “The chicken crosses so that I might kill and eat him!” But they cannot speak, yet. For now, they sit squarely against me, peevish and silent.

8:23 p.m.
Worried about my finances, I take to the computer and visit my bank’s website to stare at my account balance. Finding I am broke, I decide to stay home for the rest of the week in order to save money. Bored by the thought, I start clicking on pop-up ads I usually ignore.

One thing leads to another, and soon I am hot on the trail of a free iPod mini, with just a few minor purchases. I join the Tie of the Month Club and Wine of the Month Club, but think twice when it’s time to purchase an outdoor barbeque set. I have no room in my apartment for it—the paint thinner did not work. I think about keeping it in pieces under the bed until I can clear some space out on the fire escape. Damn! My Ab-roller is still there, I remember. But I can’t afford to lose this deal! I’m so close!

A half hour passes in front of the computer. I lose the deal. I shut the computer off and lay down on my bed for an hour in deep depression. When I close my eyes I see images of the pop-up ads flashing like colorful insults. I open them. What demons possess me? What am I going to do with all of these ties?