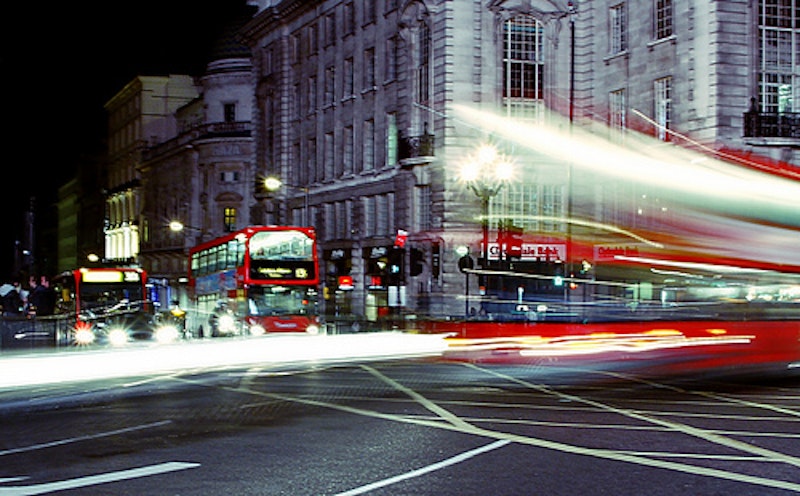 Saturday, Feb. 21 – Arrived at the Royal National, a hotel that looks like it would be an excellent place to shoot an extremely depressing pornographic movie. I am apparently the only single person staying here; all the other guests are part of massive tour groups. They seem predominantly Spanish, and in the corridors I hear the sleepy and maudlin tones of their classical guitar and occasionally the resounding tattoo of the tango. Check-in begins, firmly, at two p.m., and before that the reception coolly rebuffs any attempt to get a room.

Since my bags encumber me I have been unable to head out to find London’s fine writing instrument and boutique shaving soap district; I assume that if I turn myself out into the street and follow the crowds for long enough they will lead me there. I’ve heard rumors, on the Internet, that the supermarket Tesco carries certain highly regarded shaving impedementia, and of course the EU offers the ubiquitous (but treasured) Bic refillable fountain pen. On this journey I will pierce to the real heart of London. Not for me the cobbled streets where Oliver Cromwell founded the punk movement and Margaret Thatcher curb-stomped Neville Chamberlain; not for me the gamine charms of Picadilly Circus. No, I shall experience London the way only a native could—by attending a global health conference and searching for inexpensive stationery. I plan to walk past a promising storefront five or six times before working up the nerve to enter.

Dinner, day one. Discussed Starship Troopers with a Danish sociologist and my old friend Ann. At the table across from our group sat two perfectly coiffed young men who looked like Pete Wentz and a skinny version of Pete Wentz; in my mind they are wearing shemaghs in purple or red but maybe they weren’t. As we were leaving, the more Wentz-y one began telling the other the “bomb bomb bomb, bomb bomb Iran” anecdote from the McCain campaign and I, like an ass, leaned over and apologized to them on behalf of America and told them that it was like a knife in my heart every time I heard about it. The Wentz clone responded by asking if I had heard about the woman at the McCain rally who had accused Obama of being an Arab, and I told him that was even worse. All this followed on the heels of a discussion with a Kenyan physician who had celebrated the inauguration with other Kenyan ex-pats living in Germany; in a very low key fashion, they just went to a bar and watched it on the television, there was no dancing in the streets. And one of the conference organizers who was, perhaps, Dutch, actually had been in Kenya for the inauguration and had seen the dancing in the streets and said that, at the end of the night, everyone sort of realized that no matter how excited they were, Obama wasn’t really their president and it made all of them kind of sad.

The British Museum. Decided to eschew stationery and fine shaving equipment. This museum houses the world’s finest collection of bas-reliefs of King Assurbanipal stabbing, shooting and running over lions. Apparently Assurbanipal was like the Vin Diesel of ancient Assyria, or maybe Dick Cheney—he and his friends, when they weren’t accepting scepters and maces from tutelary spirits with eagle heads, spent most of their time shooting arrows at lions released from cages by dwarfs (or children) who were themselves contained in smaller cages that sat atop the lion cages. No wonder Assurbanipal was on a first-name basis with most of the major sun gods—he was, according to his PR team, up for stabbing an enraged lion with a short sword before breakfast. On the one hand I can see that maybe if you were working on an important ziggurat you would want to know that your boss was pretty tough, but on the other hand it was actually incredibly depressing to note an insane level of cruelty captured forever in smooth stone.

Speaking of stone, the British Museum also has the Rosetta Stone, a traditional gathering point for Belgian tourists, and a whole bunch of statue parts looted from the Parthenon and set up to communicate the following: here are a bunch of statue parts. In another room, the curators have collected a bunch of George III’s scientific equipment, including a really nice hand pump and some bitchin’ prisms. George III was a science hobbyist and it really shows. They had some neat cabinets with stone bifaces (around 400,000 years old) on the same placard as Iron Age hand axes (a fresh-faced 3000-ish), an astonishingly beautiful fossil barnacle and a mastodon molar. Any of you read Mr. Wilson’s Cabinet of Wonder? You should. Some Portuguese teenager was wandering around photographing all the Greek swords and I thought to myself, “That would have been me 15 years ago!”

In an even more puzzling chamber, called “Living and Dying,” the museum has brought together bush league contemporary art, Pacific Island ritual prestation goods, Andean festival costumes and a small but delightful collection of Taoist spirit goods. The central piece is a huge nylon tapestry filled with pills, representing the pharmaceutical careers of a British couple; it’s called “Cradle to Grave,” which must be a real treat for the female half of the couple who is, in fact, still alive.

The Royal National Hotel, again. Breakfast at the Royal National is a frightful spectacle. If you have ever wanted to fight an Austrian family for a table before nine a.m., the Royal National can make it happen. Because of my celebrity status (I assume) I qualified for the “Full English” breakfast, which is actually something I have always wanted to try—for me, the Full English is Everest, or the countryside of Tuscany. The Royal National version misses the mark by a good margin, serving suspiciously mauve eggs, gritty sausage and dry ham in an atmosphere filled with people screaming to one another in Estonian. I had to share a table, an indignity which is fundamentally contrary to the American sense of self. The toast was amazing, and despite the generally grotesque quality of the food I found myself craving it like heroin after the first day.

Coming Home – At Heathrow airport I had bangers and mash in a pleasant restaurant and eavesdropped on a transcendently rude Chinese man who badgered a Catalan waitress into letting him recharge his cell phone at the cashier’s station. The flight back seemed at least three times as long as the flight there; I was reading The Savage Detectives and The Young and Evil, books separated by around 70 years but remarkably similar in tone, content, and their generally infantile adoration of the bohemian lifestyle. They both grew boring and I found the in-flight movie, Beverly Hills Chihuahua, inexplicably sad. A few days after landing my right foot went numb and I thought I had contracted deep-vein thrombosis and was going to die; it turns out that my shoes were just too tight.