The prolific writer is best known for more wonky sci-fi fare, but his horror book Summer of Night is truly amazing. 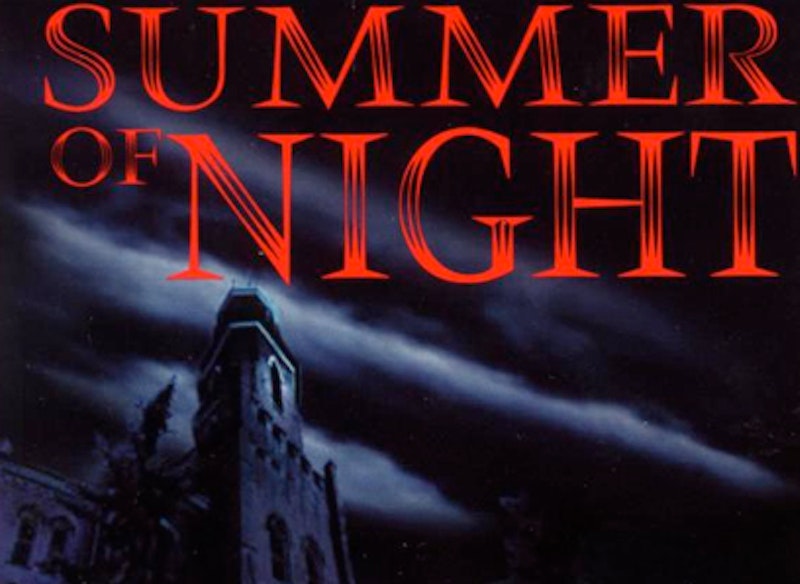 Princeton’s Chicklet Books (“A fun and funky book boutique”) is one of those mangy independent bookstores that exists in an ambiguous zone between card shop and damaged-book wholesaler. It stocks very few volumes in its singularly unappealing storefront and the owners have added a small coffee bar that, along with the incorporated post office desk, appears to draw more customers than the books themselves. Chicklet last year held an amazing sale of the remaindered books in its basement and survivors of this purge—unsold, mostly uncelebrated books, some used, some new—find their way upstairs where the owners salt them in with the store’s tiny inventory of full-price volumes. Each time I visit I am surprised and delighted that the place is still open.

At Chicklet last year I found a few books by Jeffrey Ford, and a few weeks ago I ran across Dan Simmons’ Summer of Night, a book that I had been meaning to read, for two dollars. During a conference in Memphis, Tennessee I had devoured Simmons’ delightful recent novel The Terror and I had been meaning to track down his earlier work; I’m glad I did, and as the days grow longer I can’t imagine a better way to welcome the post-memorial day warmth than with Simmons’ horrific, cunning story of growing up with monsters.

Simmons gained widespread recognition for a few of his more speculative science fiction novels, something which would not be immediately obvious to a person who entered his works through The Terror, a grim 19th-century naval novel whose air of claustrophobic misery and horror evokes the original Alien while also serving up a helping of very interesting nautical trivia. The Terror stumbles in its final act but is ultimately a perfectly fine novel. Not so Simmons’ inexplicably celebrated 1989 novel Hyperion, first in the “Hyperion Cantos.” Why do writers feel compelled to generate pretentious names for their series? What makes these dense science fiction novels cantos instead of novels?

All that I can tell you is that Hyperion (the only one I could finish), despite its critical laurels, falls prey to nearly every pitfall of the science fiction genre: waxing pretentious, portentous, tendentious and, in some cases, just dumb. I recall a scene in which a cyborg recreation of John Keats debates a gigantic supercomputer which speaks in bastardized version of Zen Buddhist koans, and this is not even the most ludicrous or irritating part of the book.

Knowing this I approached Summer of Night with some misgivings. Simmons wrote the book in 1991, after Hyperion, but it reads somehow like a first novel, in a good way. Set in rural Illinois in 1960 the book dispenses with the preachy and bush-league critical theory of Simmons’ sci-fi magnum opus and instead focuses on the intimate world of a group of 12-year old boys as they pedal their bikes and swim and connive and play baseball and also battle an implacable and disgusting evil.

Summer of Night is a horror novel through and through, and Simmons has a facility for the horror of the familiar, the aching terror of basements and dark closets, the blank and sinister promise of the space under the bed, and the indifference and cruelty of authority. The book hews close to the well-defined formula of a group of kids, confined to their small town, beholden to their parents and their many responsibilities, unable to tell anyone about their desperate battle with a cosmic evil. Sure it’s a whole lot like Stephen King’s It, although I found It unreadable and plodding where Summer of Night is almost impossible to put down. Simmons has an amazingly sure command of potboiler horror and suspense, doling out revelations, conflicts and cliffhangers with an effortless precision that kept me up reading until five in the morning.

His plot is excellent and despite its ludicrous complexity and supernatural turn it leaves few holes by the end, which is, in typical Simmons fashion, a little disappointing. But who can write a good ending after almost 600 pages? Most of these pages are worthwhile but a more savage editor could probably have halved the book without harming it unduly; then again it’s about the endless feeling of a boy’s summer, so perhaps some of the rambling can be chalked under that column.

Simmons’ prose is very plain and sometimes gratingly repetitive (I counted at least three uses of the unremarkable phrase “leaf-shadows”) but its muscular simplicity is sometimes enough to make your skin crawl:

“The blanket slipped off the cot as Mike rose and a raw smell filled the room.
Mike backed away and then came closer, lifting the blanket away.
A stench of raw earth…and something worse…rose from beneath the cot. Mike held his breath for a second and then he lifted the cot and set it against the packing crate.
There was a hole there. It was more than two feet across and perfectly round, as if it were an open manhole in a city street.”

With character Simmons wields a broader brush. He also puts together a cast of Russian dimensions, which does the reader no favors in the first few hundred pages. Eventually things clarify and you get to know the kids, though they are generally kind of one-note in a way not entirely inconsistent with what it’s like to be a boy in a group of boys. We have Mike, the guilty Catholic, Duane, the smart guy, Harlen, whose mother is divorced and dating and who might be called troubled, Dale, Simmons’ own bland stand-in, and his little brother Lawrence, Simmons’ actual little brother’s stand in. There are three girls, two of whom are attractive ciphers and one of whom is a Magical Negro-style hillbilly. Supporting characters come and go, with Duane’s father receiving the most extensive and affecting treatment despite the fact that the character (a Harvard engineering dropout who moved to Illinois to farm, indulge his raging alcoholism, occasionally beat his beloved son and get into bar fights with professors of social science in Peoria) is fundamentally ridiculous. Evil authority figures abound and Simmons has a flair for making the reader squirm with the injustice and banality of their cruelty to the boys.

The book’s central mystery revolves around Old Central School, an architecturally grotesque schoolhouse that witnessed some village depravity in the past and appears to bear the stains of contact with evil. The antagonist, whose true nature comes out only in the final third of the book, menaces the boys through a huge number of truly horrifying encounters in which Simmons shows a bravura command of human squeamishness and fear. No one writes charnel smells like Dan Simmons, just as no one can turn the ordinary sounds of a sleeping household into a prelude to horror like this author.