This Beach Is Not A Metaphor

Colson Whitehead’s new book Sag Harbor defends an author’s right to be boring when he wants to be. 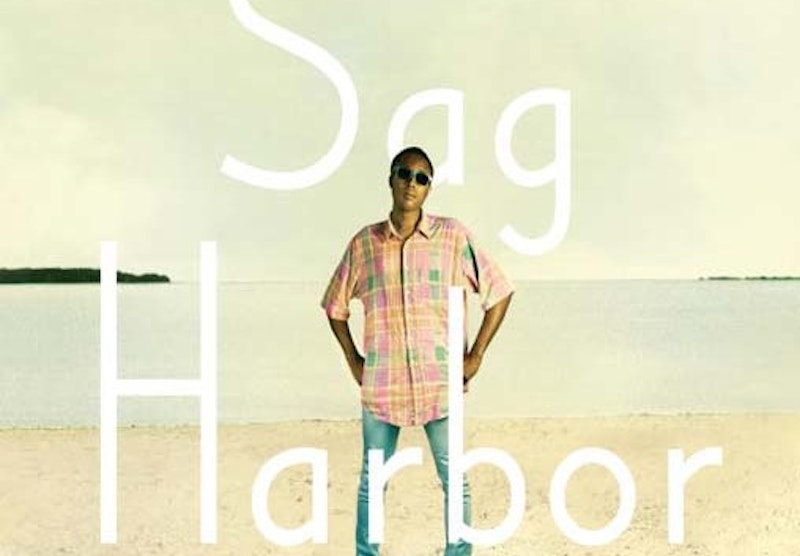 Colson Whitehead’s first two novels, The Intuitionist (1999) and John Henry Days (2001), were so thematically complex and enjoyable that his relatively relaxed third offering, a book of celebratory essays on the five boroughs called The Colossus of New York (2003), seemed more than earned. His debut, a neo-noir set in a future metropolis, used the city’s elevator repair industry as an inventive, thrilling metaphor for the societal ascension of black Americans, and the follow-up took an even more ambitious route, juxtaposing the John Henry myth with the story of a hack journalist to discern the possibility for heroism in a consumer culture. From these two books, it seemed that Whitehead was destined to be a kind of pop-wise Richard Powers, churning out conceptually thrilling, symbolically rich social novels that addressed big issues without sacrificing readability.

Colossus was a worthy breather, and entertaining in its own right. But then came Apex Hides The Hurt (2005), a too-obvious parable about Winthrop, another Everytown, USA whose leaders hire a rebranding consultant to come up with a new name. In its purposefully nondescript prose, its unnamed protagonist, and its underuse of Whitehead’s talent for evocative settings, Apex felt like an early draft for one of his better novels; without the rich characterizations and immersive details of the earlier books, Whitehead’s fourth effort was a metaphor in search of a novel.

Give him credit, then, for avoiding the Powers model for his fifth book, Sag Harbor, a first-person coming-of-age story set in the title neighborhood of Long Island during the summer of 1985. It’s tempting to assume that Whitehead himself recognized the stylistic dead-end of Apex Hides The Hurt, since Sag Harbor is nearly that novel’s inverse—it’s nothing but a collection of era- and place-specific recollections, with no great metaphors or themes in sight. It’s the writer’s first baldly autobiographical work, even more so than Colossus, and periodically enjoyable on its own unchallenging terms. I admire the writerly reboot that Whitehead attempts here, and his obvious aversion to being pigeonholed. But as a novel, Sag Harbor commits a greater sin than simple stylistic familiarity—it’s incredibly boring.

There’s barely a plot to recount in Sag Harbor, only the milieu of the all-black title town. This being a first-person book, you’d also expect there to be a unifying voice, but the narrator, Benji (now older, though how much we’re never told), doesn’t seem too invested in the summer’s proceedings either. “We didn’t change all that much year to year, we just became more of ourselves,” he admits about a quarter of the way through this rambling, lackadaisical story, leading us to wonder why we’re made to read about 1985 at all, then. Even in the novel’s final, most affecting section, about the annual Labor Day youth bonfire, Benji laments how subdued the ’85 version was: “The summer of Purple Rain, we kept flipping the cassette over and over, singing at the top of our lungs. Maybe next year.”

Paradoxically, Whitehead is in fact trying something ambitious with this kind of toned-down narration. By refuting the traditional coming-of-age arc and replacing it with mundane observations and elliptical character sketches, he has perhaps created something truer to life out of the genre’s devices. And by shifting the emphasis away from plot in general, Whitehead’s novel is more an exercise in pure writing than anything he’s done; he’s challenged himself to hold our attention by virtue of the sentences, the prose’s rhythms, and the narrator’s observations more than The Intuitionist’s drum-tight pacing or John Henry Days’ cross-generational movements. At times, like an early description of Benji and his brother asleep in the car on the way to Sag that likens the two dozing adolescents to a Rorschach pattern, he comes very close, but more often than not Sag Harbor seems downright inconsequential.

Throughout, Whitehead accentuates his novel’s events with conspicuous capitalization, a nagging too-clever device that often works against him. When Benji calls our attention to “The Great Coca-Cola Robbery” or “When Dad Called Reggie Shithead For A Year” or an older man whose dancing style falls “well within the range of Middle-Aged Black Man Getting His Groove On,” we’re meant to laugh (snicker, really) at the youthful overstatement from the safe perch of adult weariness. Whitehead intends, one assumes, to show Benji’s increased self-awareness, which is compounded by his constant reminders to us of how nerdy and socially inept he was as a teenager; like Junot Diaz’s Oscar Wao, Benji is an awkward non-white boy who finds solace in the lynchpins of Caucasian nerdery—Star Wars, the Mad Max films, comics, et al. By gently mocking his protagonist (acknowledged by Whitehead as highly autobiographical) for his dweebishness and romantic failures, the author gets to have his inherently self-absorbed memoir cake and undermine it too. His seeming discomfort with the autobiography genre’s self-importance is likewise meant to be the literary equivalent of “keeping it real,” but it often just feels deflating. Why should we care about this stuff if Benji seems so intent on reminding us how unimportant it is?

Likewise, amidst the half-ironic capitalized phrases, Whitehead over-writes his protagonist’s recollections to the point of parody while simultaneously decrying certain pop culture relics for being “so fucking corny.” Are we really meant to believe that a narrator who bemoans corniness would look back on his days as a summer ice cream shop employee and state, straight-faced, that topping remnants at the bottom of the cooler represent “The very residue of desire”? The ice cream passages of Sag Harbor in particular get bogged down by the book’s trademark smirking DeLillo-esque categorizations:
They wanted ice cream and we served them. We scooped and scooped. For crumbling entities held together only by the energy of their fierce disdain, who were often, paradoxically, nice tippers, go figure. Heiresses tugging dour poodles from place to place—“It’s good to have someone to talk to”—and grizzled he-men who worked with their hands, sneering at and ripping off their clients, those pampered city infants whom they overcharged for wood and nails and spackle so that they could afford a special oil to rub into their calluses.
Reading this, I’m less impressed by the attempted lyrical cadence than I am confused by how, exactly, a poodle can be dour. This is the essence of over-writing. Sag Harbor is as directionless as the summer days it describes, just as the frequent change from hyper-descriptiveness to conversational tones (the reader is often addressed forthrightly, just as the narrator frequently tells us he doesn’t know something specific rather than researching it or just leaving it out altogether) fits the characters’ swerving juvenile dispositions. But there’s no greater point to Sag Harbor, no implicit vision to convince us that Whitehead is really interested in this kind of formalism. There’s no indication from the novel’s other aspects to convince us that there’s a rationale behind this aimlessness.

I don’t think it’s fair to expect that Colson Whitehead spend his career spinning newer and fresher book-anchoring metaphors for race relations in America, but it’s perfectly fair to judge writers and artists by their past achievements. And when a writer shows himself so adept at plotting and scene setting, it’s hard not to feel disappointed by Sag Harbor’s hazy nostalgia. Events pop up that seem potentially weighted with significance—a BB gun injury to the eye that we hope might blossom into an Invisible Man-style symbol for sight in our culture, or Benji’s improbable affinity for Cass Elliott’s “Oh Babe, What Would You Say,” which blares from the super-cheesy local radio station that none of his black friends would abide. But these just glide by, as breezy as any of the other recollections about New Coke and microwave dinners. “According to the world,” Benji tells us at one point, “we were the definition of paradox: black boys with beach houses.” Ten years ago, Whitehead might have wrung every drop of symbolic potential from that set-up, but in Sag Harbor he seems content just to describe it.