An imperfect but entertaining debut novel centers around the small-time drug trade. 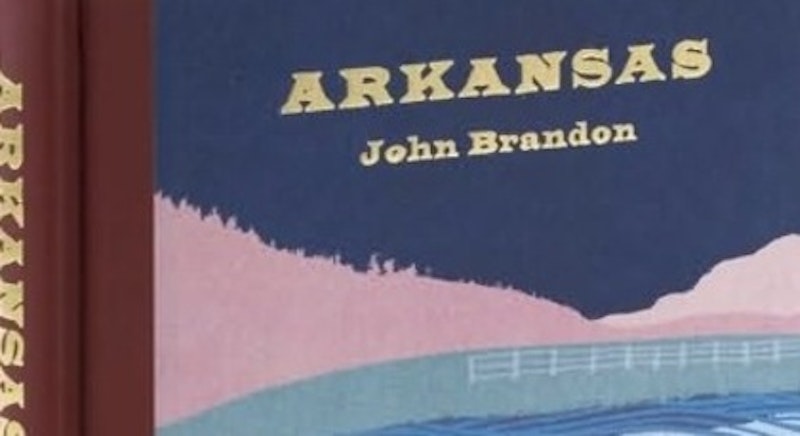 John Brandon’s first novel, Arkansas, out now through McSweeney’s, finds him somewhere between Elmore Leonard and the Coen Brothers (Raising Arizona more so than No Country for Old Men), where middle-class petty crime and twentysomething angst turns into drug trafficking and murder. Most of the novel centers around two main characters: Swin is a recent Vanderbilt drop-out whose father’s suicide and mother’s re-marriage has left him estranged from his family; Kyle has been on his own since his mother’s accidental death, unable to keep a job or a relationship.

Within the first 30 pages both men have turned to making runs for a drug czar out of Little Rock and Memphis called Frog, who has connections throughout the Southeast. They’re soon assigned to work a front as rangers at a state park in rural Arkansas under a mid-level operations man named Bright. When not making runs, Swin and Kyle manage the grounds and direct visitors; occasionally, a regional parks manager drops by. Wendy always dresses in pink and her frequent quotes from painters like Cennini serve as an ironic counterpoint to Swin and Kyle’s detachment.

Swin soon meets a nurse, Johnna, at a local grocery store and the two hit it off. His attempts to balance a relationship with a life of crime tell us more about Swin than any other character in the novel. And as the smart-alecky intellectual he plays off well against the quiet, hard-edged Kyle. “Don’t tell me you’re one of those witty people,” Kyle says to Swin during their first run.
“I’ve been told that I am.”
“You remind me of a game-show host.”
“That’s another way to say I’m brimming with charisma.”
“No,” Kyle said. “It’s not.”

Their story is intercut with a history of Frog’s rise from a poor post-graduate grocery store clerk in 1974 to the drug czar he is now. Brandon writes this history in a second-person narrative (switching to first-person only in the last section) to make the audience more sympathetic to Frog, but it comes off rather awkward, and the sections themselves are too short, usually no more than two or three pages. Still, knowing that Swin and Kyle’s story will at some point run into Frog’s history makes for exciting reading.

But about 75 pages in, after Bright is killed for money, Swin and Kyle are left to manage the operation themselves (unable to tell Frog or anyone else what has happened). Johnna tells Swin she’s pregnant and the two of them move into Bright’s trailer.

Here the novel slows down, becoming a kind of schmaltzy romantic drama about expectant parenthood, Swin’s attempts to reconnect with his sisters, and Kyle’s unsatisfying nihilism. “I wouldn’t mind having an ideal.” Kyle tells Swin. “You don’t want one” Swin says. “I can tell. You want to want one.” All the while Brandon works in cracks about church, modern music, academia, and the determination to avoid the 9-to-5. Brandon comes off as a kind of Gen-Y philosopher of boredom, who understands that our social revolution won’t be like Chicago in 1968, it’ll be Office Space:

There was no more rebellion for the thinking man, Swin knew. Rebellion was stored in a distant warehouse under a fake name. When you completed your quest, whether it was spiritual or intellectual or physical, and turned the last stone to claim your hard-won wisdom, you found that your wisdom, your reward, had been marked down for the Labor Day weekend, the your reward was cheaper if you possessed a club card, that if you bought ten spiritual and intellectual rewards the eleventh was free.

Attempts to put some action into this part of the novel don’t come off too well. When a middle-aged man turns up claiming Bright and his father had been good friends,  a senseless murder happens and it’s not clear what we’re to make of the whole thing.

The novel picks up again in the last 50 pages, after Frog decides Swin and Kyle must have murdered Bright, and so they must also be killed. Here’s where you won’t be able to put Arkansas down. The ending is a genuine surprise, and fairly gruesome, making up for some of the slower sections, though by the last page the reader’s still left with questions, asking what happens next. Still, Arkansas makes for a good fast read and Brandon’s talent is obvious. It’s a strong, if flawed, debut from an up-and-coming novelist.