Bewitched, or How to Successfully Tune Out War 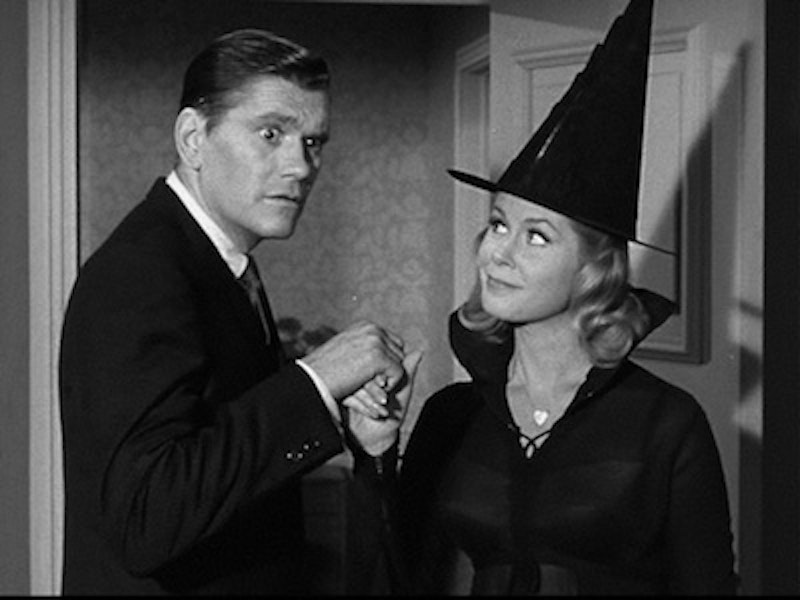 A few years ago, when I was drowning in listlessness and regularly struck down by acedia—what the Desert Fathers called the “noonday demon”—I’d spend my hours of utter dread in front of the television. I didn’t have cable but relied solely on “rabbit ears,” and because of that, I was able to get only a few channels.

On one June day, I sat in the living room staring mindlessly at the screen looking for the meaning of life. Of course, there was no way that an epiphany would arrive from anything that I was looking through but I kept trying. My finger was making that repetitive motion of switching from one channel to the next. The TV signal was getting lost, the picture was going in and out, and the only two channels that were coming in clearly, involved Time Life music infomercials and some kind of religion.

Televangelists fascinate me so I became transfixed with an image that was before me. Four women are sitting at the studio table and are discussing God. They don’t really use that word—God—rather, they oscillate between “Lord” and “Jesus.”

“So, Jenny, tell me,” says the host awkwardly, “when was the moment when the Lord spoke to you…when you finally realized this is it?”

Jenny laughs nervously as if she’s about lose her lunch. As if on command, she switches from panic to complete self-control and self-knowledge.

“I just knew. I was sitting outside, in this beautiful meadow, and the sun was shining so bright, and angels came to me and I knew, at that moment, that I was finally saved. Jesus was with me.”

Other women interrupt Jenny from time to time.

“The Lord is always here.”

The hostess turns toward the camera. The testimonial is over. She says: “You can be saved too. Listen to our Lord. Listen to His voice and salvation will come… and we are here to make that important journey possible… call the number on the screen and you will receive this beautiful booklet on what steps you can take to be united with Jesus… you will also receive a CD, which guides you through the steps… just call the number… you will not regret it… and remember, the cost is minimal… yes, praise Jesus!”

Despite the fact that I have strange curiosity about false prophets, I got tired of listening to this phony twangy “Jesus talk.” I was about to turn off the TV and stare at something else other than the screen, when I switched the channel and a familiar image appeared before me. It was the American sitcom from the 1960s—Bewitched—with that very attractive Elizabeth Montgomery.

I wasn’t even born when the show was made but did watch the re-runs religiously, as a child, in Bosnia. Despite the fact that I came from a communist country, for whatever inexplicable reason, entertainment included American TV. The episode I was watching from my couch in America was “Mother, Meet What’s His Name,” which originally aired in 1964. In the episode, Samantha and Darrin are trying to find a balance between Samantha using her powers and living just a “normal” life. She’s determined to please Darrin and tries to restrain herself from using the witch powers.

In comes Samantha’s mother, Endora. She doesn’t approve of her daughter’s choice in not only a husband but also the ridiculous wish to live a normal, mortal, human life. Endora threatens to turn Darrin into an artichoke. Understandably, he’s very worried: “Can she really turn me into an artichoke,” asks Darrin. “Well, yes,” says Samantha matter-of-factly. Darrin responds with “Man, that is creepy.” But Samantha assures him that if her mother ever does that, she too will choose to become an artichoke.

It didn’t take long for me to remember a particular moment when I saw this very episode before. It was during the war, sometime in June or July of 1992. It was a quiet day outside. Quiet days during a war are never good. You think that all of the shooting is coming to an end, but really it’s just preparing. I’d become more aware of the silence than the sound of the war.

Generally I stayed away from the windows in case a mortar shell detonated nearby but that day, I couldn’t care less about my safety. I was indifferent to the consequences of war, whether they included myself or someone else. Our television set was in the corner of the living room, which was near the window. War’s boring and I tried to avoid boredom. Television seemed like the best companion. Whenever we had power, the TV was on, and this time, I was sitting very close to the screen waiting in anticipation whether Endora will turn Darrin into an artichoke.

Darrin’s fear and Samantha’s annoyance at her mother is interrupted by a single whiz of a sniper’s bullet. Usually, once the sniper has broken the silence, the endless shelling follows. I’ve grown accustomed to it, and nothing could possibly surprise me.

Once the shelling started, it was time to go to the basement of our condo building. My mother warned me and told me to get up and go. I was refusing not only to go but also to turn off the television. I wanted to be surrounded by those beautiful technicolors of the show, and if in some way I could, I would have entered into the Bewitched set.

The exploding shells were getting louder and louder and closer and closer. But I was determined to stay in the living room to finish watching this episode. The pressure and tension of whether Darrin would be turned into an artichoke was killing me. Maybe I was naive or wise beyond my years or more likely, somewhere in the middle. Whatever the state of my wisdom may have been, I was indifferent to evil and a small part of me was unwilling to give up on enjoyment because of the war. Of course, Endora didn’t turn Darrin into an artichoke and the episode ended on a usual high note and good humor. But such endings only exist in closed sets while the red light is on and the camera is rolling. The endings may be fake, but they sure do cure boredom during the war.