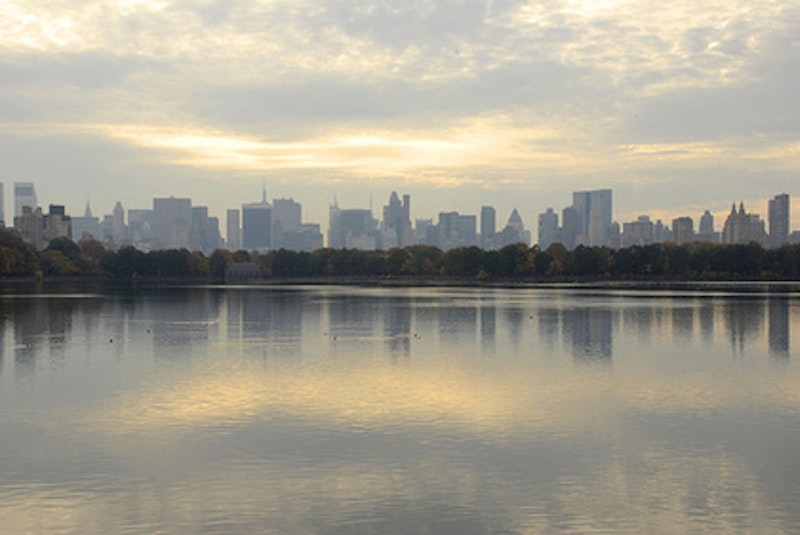 Photo by calm a llama down.

The carousel in Bryant Park will soon stop spinning. Already its song sounds softer, almost unheard when autumn winds rush the canopy of leaves above the park.

At Lincoln Center posters advertise the upcoming season. Look! La Traviata is coming to the Metropolitan in November. Outside the MOMA new posters are unfurled in honor of the museum’s latest exhibit—Kirchner’s Berlin Street Scenes, Van Gogh’s Night.

It’s Sunday. Sheep Meadow is locked for winter and your wiffle bat has begun its seasonal drift toward the back of your closet. Instead of going out, you decide to prepare hot toddies with your boyfriend at home. Amid the sprawl of the Sunday Times and sesame seeds scattered from the morning’s bagels, you practice laziness—your pet art. With the window open, bites of sweet cold float in, causing your girlfriend to seek warmth inside one of your oversized shirts which she wears rolled at the sleeves. Sitting Indian style on the hard wood floor while puzzling over the crossword, she looks up, raises her hands to accept the hot drink you’ve brought, smiling as if to say, “It’s fall.”

Go outside. Look! A student film crew is set up in one corner of Washington Square. Three NYU sophomores are about to capture in 16mm that ineffable feeling that is autumn in New York. If only they could stop arguing about that next shot. A young man with hastily grown sideburns fiddles with his camera while bickering with the purple-haired girl over where to hold the light reflector. A policeman settles everything when he forces them to disband as they are unable to produce a permit.

Later on, you bicycle across town on 10th St., a chilly breeze pushes your hair from your face, nibbles your earlobes as if to tease you about the approach of winter. Will you stop home to retrieve another sweater, before you meet your friends for billiards, for bowling, for basketball at the Hudson River courts? A gust of wind swells and the leaves say, “Yes!”

Underground at the Union Square subway station. Notice the stylish couple causing a scene across the platform. She’s crying and he’s yelling, and they’ve nearly got it right, are almost ready to return to their acting class at the Lee Strasberg Institute a few blocks over where fall session has just gotten underway. The pretty girl wipes her tears, fixes her makeup in a compact mirror, and adlibs distress. You catch her eye and she smiles slyly. You don’t know it yet, but soon she will be famous.

In a park of concrete and metal on 57th St. and 9th Ave., a young woman is on her lunch break. In open-toe shoes and a thin sleeveless blouse, she shivers and folds her arms across her chest when the wind rises. She might have dressed in something warmer, but she is unwilling to relinquish the summer so soon—it’s only October. Beside her, another lady sweats inside a rust colored sweater paired with tall leather boots, too thrilled by her new wardrobe to delay by one more day her private parade of the fall’s latest fashion. Sipping her hot coffee, she dabs the sweat from her brow and happily considers what she will wear tomorrow.

Crowds pour into the Angelika movie theater on Houston St., excited to see the latest hyperrealist take on the discontents of cosmopolitan intellectuals at family gatherings in Connecticut. Someone’s sister is getting married—how terrifically bourgeois! Further west is a matinee of Breakfast at Tiffany’s, and at Film Forum or Anthology Film Archives, or somewhere West or East of there, Woody Allen’s Manhattan is playing, has just played, or is about to play, because it is Autumn in New York and there are wonderful things to do!

Yes, there are wonderful things to do in Manhattan, but I prefer the other things. Please, if you’d like to join me we can:

Film a cinematic homage to a New York classic on my camera phone. Breakfast at The Container Store, starring me! I’ll buy a croissant and you hold the camera while I stand in my crumpled evening gown outside a shop window on 6th Ave. Be sure to catch the light, as I look longingly at the lush display of filing cabinets and accordion folders. “The Container Store,” I’ll say wistfully between nibbles of my modest breakfast, “is where I go when I’m feeling sad. Nothing very bad could ever happen to you there. Isn’t it marvelous to think that everything can be put away?”

You’ll make a joke about the store’s impact on Cold War foreign policy and point out a handsome wood-finished drawer inside which we once might have contained communism. I’ll punch you on the shoulder lightly and say it’s not funny but laugh anyway.

Hungry? We can visit The Olive Garden overlooking Times Square for a tête à tête amoureux over their all-you-can-eat bread sticks and salad as is advertised on TV. After we’ve exhausted their supply, you’ll excuse yourself to the men’s room, but on your way tell our waiter a lie about it being my birthday. Later after he clears the sixth serving of breadsticks, he’ll emerge from the kitchen holding our free cake ablaze! And with a staff trailing after him like a festive kite-string, they’ll sing their approach. Then, with the candles lighting my face from below, my eyes closed and my mouth torn in joy, the light will dart in quick shadows across my features foretelling what I’ll look like in just a few years if I keep up my drinking and you stick around to see it.

Pausing before the cake and silently drafting my wish, I’ll take a deep breath and then begin to blow, steady and full like the change of seasons, as if I were the autumn wind itself tearing through the candles like old trees—I’ll wish the day would never end. I’ll wish you knew what I was thinking.

You’ll pick up the check. I’ll steal a desert spoon by lacing it through my hair like a holiday flower. And then we’ll run out screaming with laughter.

Tired, but unwilling to stop the fun just then, we’ll take the subway down, all the way down to Manhattan’s bottom lip. Passing the free turnstile, we’ll go fishing off the stern of the Staten Island ferry for shoes and discarded hearing aids and whatever other unexpected treasures that attach to our hooks. You’ll hold my hair back as I upchuck starboard, catching the spoon at the last second before it falls overboard.

I’ll smoke a cigarette after that, and attempt to spell my name in the air, the way I used to with sparklers on the Fourth of July. After remarking on the fleeting nature of the seasons and also of you and me, I’ll prick my ears to the lapping water below, cast an eye up at nothing and then across to Manhattan where windows begin twinkling instead of stars, and start to wish I hadn’t drank all that vodka though I won’t say so. “What’s wrong?” you’ll say, and I’ll say nothing for a moment, but just smile at you. “It’s fall!” I’ll tell you finally, before suggesting we stop at the liquor store as soon as we dock.

Disembarking from the ship while the sun dips lower, our pace will slow and our mood will darken with the sky. Walking uptown arm and arm, our steps sounding a near minuet, I won’t tell you what I’m up to, but I’ll be stepping as hard as I can hoping to leave my footprint in the pavement beside the impressions made by someone else’s right shoe, beside curse words, and initials enclosed by hastily drawn hearts.

Looking up at the sky, and then out over the street, we see it’s late already, that the night has risen practically up to our chin—“Should we go to grand Central Station for a drink among the transients and give a toast to old what’s his name and tell stories about something or other?” I say. You pause, and give a look uptown to the great buildings of midtown, and then a look downtown toward me, scaffolded again by whirling rings of cigarette smoke. I’ll bite my lip nervously and wait for your answer, frightened of the end of the night, feeling my heart crash inside my chest like a dropped bag of metal parts.

“No,” you’ll announce firmly, “We’ll go home instead!” In the warmth of my one bedroom apartment, one block over and three flights up, we’ll tell each other secrets until the Jell-O congeals and the sun rises. “I wish I were a cloud.” “I’ve never read Ulysses.” “I’m worried I’m losing my hair.” “I’ve never liked Sting. I find the whole of The Police repetitive.” “I ran for president of my high school class and lost.” “I gave my cat a dog’s name.” “I think I’m losing my hair.” “I’m lonely. Are you?”

In the brilliant cool autumn morning, the light, clear and bright, fills the apartment. And as if tapped on the shoulder, we awake, stiff and uncomfortable where we passed out eventually on the floor, covered in last night’s soda crackers. Get up! Get up! It’s autumn in New York, there are wonderful things to do! Start off with an aspirin!