A Night in the Life

The Beatles (once again!), anniversaries and random threads of thought during a hospital stay. 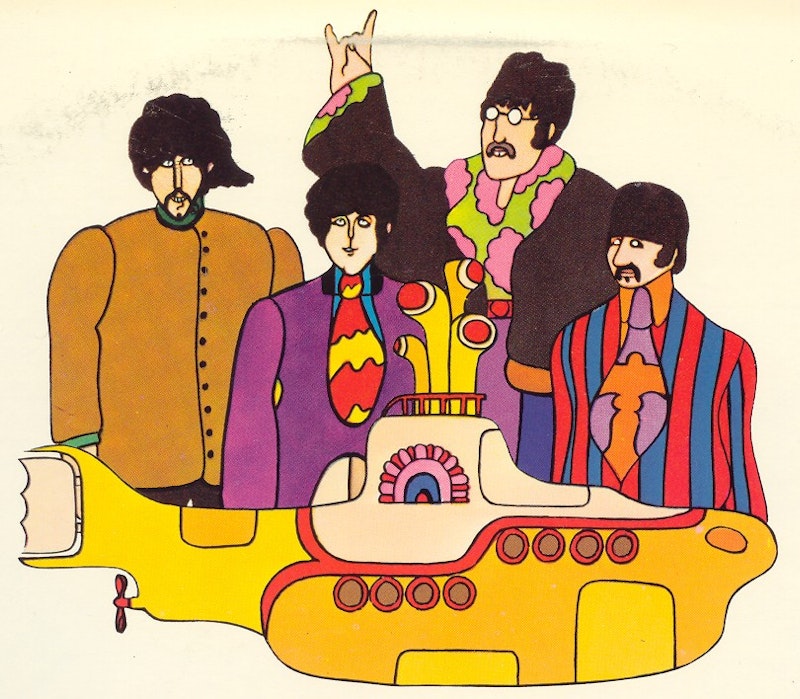 Last Thursday night I was zoning out in a freezing hospital room, next to my 17-year-old son who was off in a personal Pepperland thanks to the painkillers administered for his impending surgery for appendicitis. Not surprisingly, the fatigue of a long day in the emergency room-punctuated by Nick's barf bucket, inattentive doctors, lovely nurses and flat-out worrying-caused my mind to wander and at one point I realized that my oldest brother, who turned 67 on Nov. 21, was exactly 50 years older than my bed-ridden son.

That led to a stream-of-consciousness frenzy of musing about maybe a dozen various anniversaries, so much so that I felt like one of those lazy list-makers at Rolling Stone, People, Esquire and Time, to mention just a sampling of egregious offenders. Oddly enough, this downscale slide was not unsettling—and naturally, the assassination of JFK, 46 years ago, despite decades of Kennedy overload, still resonated, as I recalled my third-grade bus driver at Southdown School in Huntington, New York, weeping as he drove us home. I took pleasure in this indulgence, gladly tossing aside a wearisome and earnest spate of "the media's future" articles in the latest Columbia Journalism Review.

Earlier in the week I'd read a few articles about the Beatles on Popmatters, including one that offered a subjective list of the band's top 25 songs. In weak moments, I'm a sucker for such frothy topics and, as I'd just recently watched the Beatles Anthology DVD along with my younger son—we've done that for the past several years once the World Series is completed—the Fab Four were once again harmonizing in my head. (Coincidentally, that same son was also brought to the ER on Friday, after he was accidentally hit with a loaded backpack that resulted in a head gash—and concussion—which required nine stitches.)

Was 1967's "Hello Goodbye" about the death of Brian Epstein? Did John Lennon feel a little silly in the mid-60s for aping Bob Dylan with his more-than-yeah-yeah-yeah "Norwegian Wood"? Why did Lennon and McCartney allow Ringo to louse up each record with a lead vocal on one awful song? And how is it even possible to describe the phenomenon of Beatlemania in '64 to my kids, when in the period of six months a slew of records were released, A Hard Day's Night was in theaters, Beatles trading cards were on sale for a nickel a pack, and so many kids caught grief from their hopelessly square parents for insisting they just couldn't live with a crew-cut anymore. Not dissimilar, I guess, to my parents and uncles attempting to explain just how immense a celebrity Babe Ruth was in the earlier part of the 20th century: Intellectually, of course, you get it, but that doesn't remotely compare to actually seeing the Babe hit a homer in Yankee Stadium or reading about his naughty antics in the scads of tabloids that were hawked around New York during that era.

It was then that I remembered it was 40 years ago that my byline first appeared in print, a review of the Beatles' just-released Abbey Road, which appeared in the Simpson Jr. High Echo, a monthly newspaper produced by students, although hindered by a censorious English teacher. (A few months later, in a mimeographed "underground" sheet I ran into trouble with the principal of the school for writing a parody of his lieutenant's enforcement of the dress code.) Each month, Ricky Morrison and I would take a crack at an album (furnished by a local record store, which received an italicized mention at the bottom of the column, and pissed off classmates, who wanted to get in on the swag), and though I'm sure the prose was stilted, it sure was fun.

I panned Abbey Road, which was a total letdown (despite the very cool cover) from the band's recent work, and slammed John for his self-indulgent and droning "I Want You (She's So Heavy)." Also singled out for scorn were "Maxwell's Silver Hammer," "Because," "Octopus's Garden," "Something" and "Oh! Darling." A few songs made the grade for this 14-year-old, like "You Never Give Me Your Money," "Mean Mr. Mustard" and "She Came in Through the Bathroom Window" (covered magnificently by Joe Cocker shortly after), but by and large I though the record was a stinker.

Little did I know, aside from cryptic and inconclusive stories in the two-year-old Rolling Stone, that in just several months the Beatles would shock the world by breaking up, releasing the so-so Let it Be (along with the crummy movie of the same title), an event that was almost too momentous to comprehend. At the time, no one really believed the Beatles would never perform together again, but it wasn't in the cards: the years passed, John, Paul, George and even Ringo released solo records—a few of them pretty sharp, like Lennon's Plastic Ono Band and Harrison's All Things Must Pass—and when John was killed, any legitimate reunion was scotched forever.

I still wonder if Lennon had survived if the group would've followed their aging contemporaries, and maybe in the mid-80s gathered for a stadium concert and new album. It's just conjecture, obviously, but I bet not: They were loaded (especially the business-savvy Paul), the Yoko factor was still a sticking point and unless John mellowed, which seems unlikely, it's hard to imagine them reconciling long enough to pull off even a one-shot nostalgia event.

Anyway, as this stewed around in my head that night, I thought of my current (like Dylan or the Stones, these lists can change month to month) Top 7 Beatles' songs, in no particular order. They tick off: "While My Guitar Gently Weeps," "Don't Bother Me," "A Day in the Life," "For No One," "Strawberry Fields," "And Your Bird Can Sing" and "I'll Be Back."

I asked my two sons and one of my brothers to compile their lists, for a cross-generational spin.

It was a fun bit of piffle, so, if you're inclined, please weigh in with your own Top 7 Beatles' tunes.