The dynasty’s time at the top seems to have ended, but thankfully so has its era of reprehensible training. 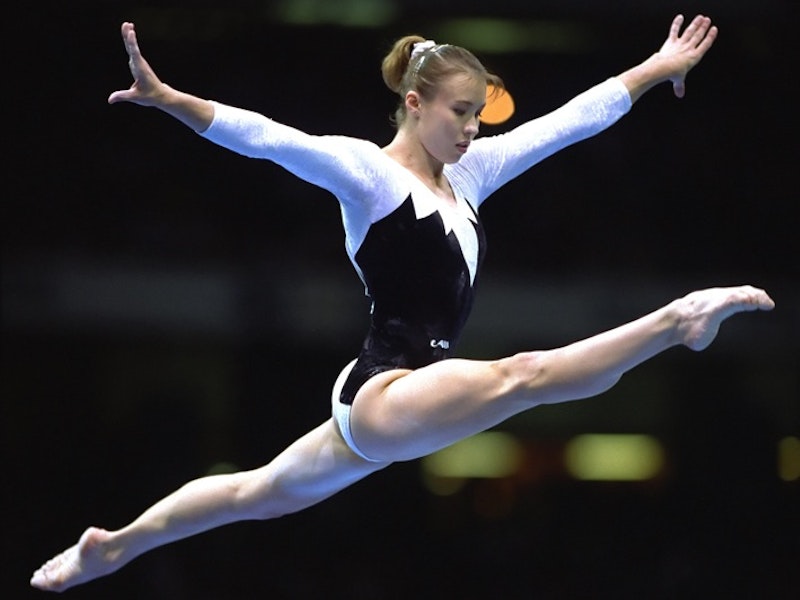 In her floor routine at last year’s Olympic Games, Shawn Johnson stuck a triple twist, flashed a teeth-clenching smile and then performed a dance sequence for the sole purpose of killing time before her next tumbling pass. The routines last year seemed to suffer from an emotional deficit, but that was only because the Russians were nowhere to be found. It is unclear whether the Soviet team was the first to infuse gymnastics with style and personality but it is obvious that when the Russians got left behind, the sport stiffened. All we could do to protest was chew on our nails, suck on our breath and ask one another stutteringly: Where are the Russians?

To this day, the Russian gymnasts are still missed and lusted after, with wagging tongues. Most recent is Svetlana Khorkina who weirdly told an NBC reporter before the 2004 Olympic Games, “I want to win a gold medal as much as I want to mother my own child.” The five-foot-four Khorkina is a seven-time Olympic gold medalist, who competed in three Olympic Games and did not retire from the sport until the elderly age of 25, following the Sydney Games. But Khorkina is perhaps best known for her exhilarating bad sportsmanship, sticking her tongue out at reporters and perpetually sulking. In the 2004 Olympics, Khorkina’s vault was set to the wrong height, causing her to crash-plummet on her heels. Insisting her right to the gold, at the end of the night she flounced over to the uneven bars, where she draped a Russian flag over the lower bar, averring turf. “I am still Olympic champion,” she told a reporter.

Khorkina was not a rare act in her home nation. To be a Russian gymnast meant to collect a treasury of medals, and then act as a star. The team’s histrionics had several origins, one being their coach’s emphasis on dance, which helped release the gymnasts’ diva-like qualities. Russian coaches, obsessed with the artistic side of the sport, studied anatomy and physiology to learn how the body works with the mind, both in acrobatics, and in dance. “From day one, we practiced on a ballet bar for 30-45 minutes. It became, for me, like one of the events in gymnastics,” says former Russian gymnast and three-time Olympic champion Svetlana Boginskaya. “We worked on posture flexibility and the many other things that made Russian gymnasts stand out from many others.” And stand out she did; in the 1989 World Gymnastics Championships, Boginskaya crisscrossed her arms over her chest, then slithered her fingers down her back so that it looked like a graceful boyfriend was preparing her for bed. The look on her face was ravishingly come-hither.

Boginskaya’s show, soft-core pornography that it was, leads us to another recurring theme of Russian gymnastics: sexual maturation, or, old age. Russian gymnasts do not even begin training until they are five or six years old because the training clubs offer different leagues for children than adults. “The Soviet system wants children to be able to listen and follow instructions and around age six is when they are ready,” says Boginskaya. Furthermore, Olympic-level gymnasts are not allowed to retire, until a better gymnast stumbles onto the team to replace them. “So you can see it’s not as young as in some other countries,” says Boginskaya, who competed in her last Olympics at age 23, a feat in the gymnastics world. Larissa Latynina, even more memorably, did not retire from the sport until she was 32, snagging 18 Olympic medals over the course of her career, six of which were earned while she was three months pregnant. Svetlana Khorkina, who posed nude for Russian Playboy, is of course another example of an older gymnast froth with sexuality. In her floor exercises, she would glare at the audience moistly, then send them air kisses with both hands, like she was blowing dandelion fluff.

It’s easy, here, to deduce how age builds expressionism; older gymnasts, like Khorkina, are simply more hormonally charged, more in tune with their emotions and more proficient in revealing them. “As you watch the Russian gymnasts grow older, you watch their personalities come out,” says Dominique Moceanu, a member of the 1996 gold-medal winning U.S. Olympic team. Perhaps there’s a simpler explanation for the Russian gymnast’s saucy rendering of the sport: they are, simply put, Russian. It could very well be argued that the Soviet Union (not just the gymnasts) invented attitude, then ladled it out to other continents, along with third-wave immigration. That very attitude was ingrained inside many of its gymnasts, such as the beaming Olga Korbut, who bounced through her routines in the 1972 and ‘76 Olympic Games, smiling even when in mid-air. She stole the audience’s hearts, only to break them later, when she muffed a bar routine and burst into tears. What was one of the sport’s first open displays of heartbreak seemed Russian to the brim.

Russian personality wasn’t an over-compensation for missing pieces. Once Soviet Union gymnasts entered the games in 1952, they picked up the team gold medal in every Olympics—with one exception—until 1992. (The only miss was in 1984, when the Russians boycotted the Los Angeles Games to slap America in the face for boycotting their Moscow games, four years earlier.) But for the past 14 years, Russian gymnastics has endured a slow crumble in step with the collapse of the Soviet Union. It placed second in the 1996 and 2000 Games, only to slip to third in 1992 and then to completely drop from the radar in 2008’s Beijing Games.

And so the story goes; Soviet personality is still a jumble to understand, but Soviet success is a basic matter of communism and communism only.

A Communist regime was good for winning, mainly because it fully funded the training of the sport. To participate, one had to prove from an early age that she was Olympic material, or she would be junked, with no option for self-funding. Children, at the ages of five and six, would begin training in local government-funded gymnastics schools, explains Boginskaya, and after about three months, the children were given a small test on physical ability, which decided whether they could continue the sport. Early training was not as intensive as would be expected, however. The children would spend their first few years of gymnastics doing flexibility, strength exercises, and dance, warming their bodies up for the sport, says Dwight Normille, editor of International Gymnastics. “It’s different in the US, where we tend to teach beginners skills right away, before the kids even know how to point their toes,” he adds.

When the gymnasts were around 12 years old, they were sent to gymnastics boarding schools, called intranets. It was there that eating disorders were overlooked, faces slapped. Low-wattage abuse was considered just a necessary means to success. According to Katya Sknarina, a member of the Russian National Rhythmic Gymnastics team, both the rhythmic and artistic gymnasts were not encouraged to starve themselves but ordered to weigh “X-amount of kilos and nobody cared how you did it. We would just figure it out ourselves, through starving or throwing up.” The term “eating disorder,” she says, had not yet been invented yet. Sknarina explains that she did witness coaches slapping gymnasts, but she didn’t think of it as abuse at the time. “Right now, when I think about it, it probably was abuse, but it was just ‘discipline’ back then,” she says. Still, Sknarina reports that the abuse was primarily mental; the coaches would bully gymnasts to the point that they would want to abuse themselves, she explains.  “You go through eating disorders, broken bones, seven-hour-a-day training, gymnastics boarding schools. You agree to do that. For the medal.”

Sknarina acknowledges her coach’s questionable training methods, only to defend them at the same time. The coaches were under just as much pressure as the gymnasts,” she says. If the coaches’ gymnasts did not win, she says, the coaches would face the wrath of the government.  They would be fired, and then have a difficult time finding new work.

But there were some, such as Boginskaya’s coach Lyubov Miromanova, who took the road less traveled, abstaining from abusive training methods completely. Miromanova even went as far as taking care of Boginskaya outside the gym, when she moved from Minsk to train full-time in Moscow. “She was a great coach and my best friend and second mother,” says Boginskaya.

The Russian Gymnastics Federation (RGF), to this day, dismisses all claims to abuse. “Look, discipline methods depend on the individual trainer and the individual student,” says RGF representative Nikolai Alikseyevich Grushin. “Some students need a bit of sternness, some need kindness. But abuse of discipline? No.”

When the Wall fell in 1989, freedom lowered the instances of abuse in the gyms, which was good for the emotional stability of gymnasts but bad for team Olympic results. The sport was rocked in other ways, as well: the government-funding for training was axed and the top coaches, such as Alexander Alexandrov, Antoli Koseev, Oleg Ostapanko, Tatianas Gutsu, and Liliya Podkapavaeva decamped to America, and elsewhere. Although he wasn’t a coach at the time, Valeri Liukin, an Olympic all-around silver medalist, fled to Texas, where he coached the two most recent Olympic all-around gold medalists: Carly Patterson in 2004, and his daughter Nastia in 2008. Adding to the plight, some of the more prominent older gymnasts, who were not allowed to withdraw from the team under Communist rule, eagerly retired. Perhaps the most crushing setback, though, was that the team split into several different teams, including Ukraine and Belarus, both fierce Olympic competitors. “Can you imagine the United States splitting up into 50 different countries and then each of them having to be the best team?” says Boginskaya, “It would be very hard and it would take a long time.”

But the dark period of Russian gymnastics is now seeing some light. Grushin explains that the major problem with the system today lies in the lack of trainers and finance, but that government is slowly beginning to fund training again. “The government has been paying attention to us a lot lately,” he says. Skarina describes the new Russian gymnastics as a bit too “commercialized.” Girls line up for “auditions,” and once a year, the country offers special programs for foreign gymnasts, willing to pay large sums of money to train under a Russian coach. Classes now cost money for local gymnasts as well, explains Skarina, but “there are exceptions for very talented and low-income kids.”

Indeed, Svetlana Khorkina, speaks about Russia’s spot in the London Olympics with a sense of hope, even if it might be a last hope. She said in an interview with the gymnastics blog Triple Full: “So it came about that first there was one distraction, then another. But that's OK; the situation is righting itself now. I think that we will be better prepared for London than for Beijing. I hope to see our boys and girls making bright appearances in 2012. I want to believe this!”